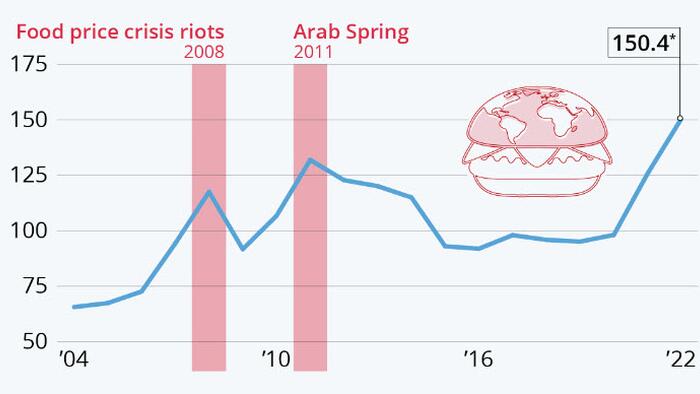 
The Russian war in Ukraine has had immediate repercussions for global food markets given the countries’ role as major exporters of essential agricultural products, such as wheat, sunflower oil, barley and corn, while also affecting perishable foods like fruits and vegetables.

As shown in FAO data, the price of basic food products has surged since the invasion of Ukraine after already having followed an upward trend since 2020 over the course of the Covid-19 pandemic.

As Statista’s Katharina Buchholz notes, in the past, similar surges in the price of food have led to unrest, mostly in developing countries, and even coincided with the Arab Spring in 2011, when populations in North Africa and the Middle East cornered by oppressive regimes and feeling the additional squeeze on their livelihoods due to high prices rose up and toppled several regional regimes. The current level of food prices is even surpassing the peaks observed in 2011 and 2008, when food and other prices rose dramatically, causing unrest in several African countries as well as in Bangladesh, Haiti, Indonesia and Yemen. The onset of the global financial crisis put an end to the price surge that year.

In the current situation, Human Rights Watch has warned that food crisis could hit North Africa and the Middle East again, as several countries in the region are major importers of Russian or Ukrainian food products.

According to Cornell University economics professor Chris Barrett, the potential for unrest is again heightened.

As of early June, food prices had already fueled protests all over the world, including in Asia, Africa, the Middle East, Latin America and Europe.