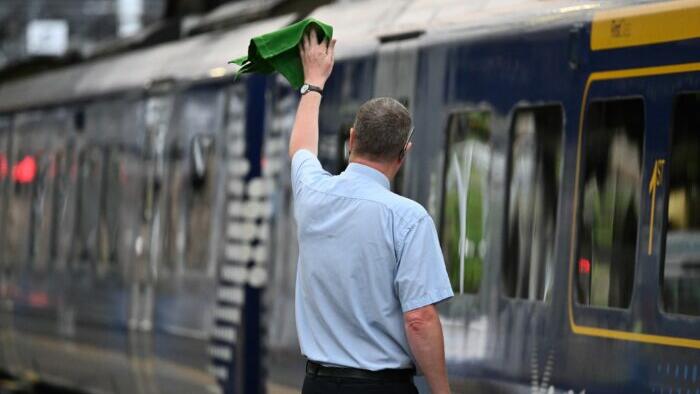 The UK government has announced new legislation to enable businesses to supply agency workers to plug staffing gaps during industrial action, as train services were disrupted again by the second nationwide strike of the week.

Following widespread travel chaos on Tuesday, some 40,000 members of the Rail, Maritime, and Transport Workers’ union (RMT) walked out again on Thursday, and are expected to go on strike again on Saturday.

Union leaders launched what they touted as the “biggest rail strike in modern history” after rail operators refused to agree to the union’s demands including a 7 percent pay rise.

The government said the existing restriction “can have a disproportionate impact, including on important public services, causing severe disruption to the UK economy and society.”

Business Secretary Kwasi Kwarteng said: “Once again trade unions are holding the country to ransom by grinding crucial public services and businesses to a halt. The situation we are in is not sustainable.”

He said repealing the restrictions will “give businesses freedom to access fully skilled staff at speed, all while allowing people to get on with their lives uninterrupted to help keep the economy ticking.”

Transport Secretary Grant Shapps said that “far too many hard working families and businesses were unfairly affected by unions’ refusal to modernise” and the new legislation will “ensure any future strikes will cause even less disruption.”

Network Rail, which manages Britain’s rail network, welcomed the new legislation but the opposition Labour Party and unions condemned it as a “recipe for disaster.”

On Thursday, major railway stations were much quieter than normal as services were crippled by the strike. Just one in five trains are running, and they are mostly restricted to main lines, with around half of the network closed.

But Shapps said, “Despite the best efforts of militant union leaders to bring our country to a standstill, it’s clear this week’s strikes did not have the desired impact due to more people being able to work from home.”

Broadband provider Virgin Media O2 said it recorded an increase in usage of up to 10 percent on the first day of the strikes on Tuesday, indicating that “millions more people are working from home” this week.

National Highways senior network planner Frank Bird said traffic flows on motorways and major A roads on Thursday morning were “remarkably good,” despite earlier fears of a surge in traffic as train passengers switch to road transport during the rail strikes.

He said: “Two years on [from the COVID-19 pandemic] we’ve learned to work in different ways, people are working from home, so it’s a very different picture. People are still able to carry on working even though the rail dispute is ongoing.”