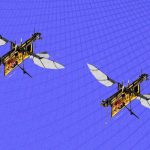 Engineers at the Massachusetts Institute of Technology have developed robotic lightning bugs that emit light when they fly. Think fireflies, but with what the robot’s creators call electroluminescent soft artificial muscles for flying. Their tiny artificial muscles control the robot’s wings and emit colored light during flight, which provides a low-cost way to track the robots and also could enable them to communicate. Their light, which offers a way for researchers to track the robots, could one day make the machines useful for search-and-rescue missions. In dangerous locations, the robots could signal for help by flashing their lights.

In future versions, their electroluminescence could enable the robots to communicate with each other. If sent on a search-and-rescue mission into a collapsed building, for instance, a robot that finds survivors could use lights to signal others and call for help. Now, they have shown that they can track the robots precisely using the light they emit and just three smartphone cameras.

The electroluminescence would allow less sophisticated equipment to be used and the robots to be tracked from distance, perhaps via another larger mobile robot, for real-world deployment. It’s normally difficult for such tiny robots to transmit information. Large-scale robots can communicate using a lot of different tools Bluetooth, wireless, all those sorts of things. But for a tiny, power-constrained robot, we are forced to think about new modes of communication.

These robots as tiny and they are just a bit heavier than a paperclip. The same team of researchers designed their unique wings, made of a rubber-like material and electrodes, that flap when voltage is applied. These robots are so lightweight that they can’t carry sensors, so researchers must track them using bulky infrared cameras that don’t work well outdoors.