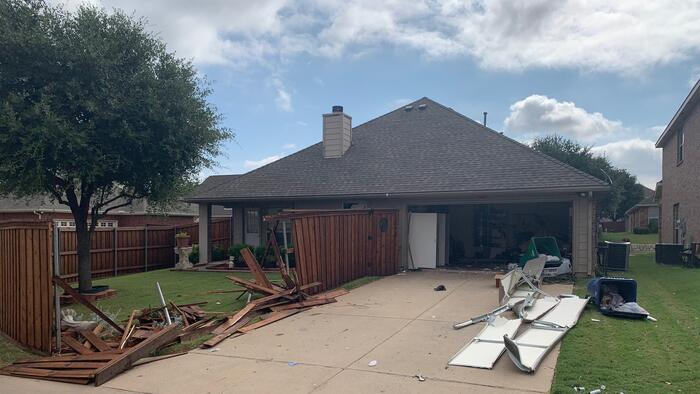 
After a SWAT team wrecked an innocent woman’s house, the city of McKinney, Texas essentially told her “tough luck” and refused to compensate her. In a case that could have nationwide property rights implications, a federal jury on Wednesday awarded her $59,656.59 in damages—and more may be coming.

The case marks a “sea change in the law,” according to Baker’s attorney, Jeffrey Redfern of the liberty-minded Institute for Justice:

“Everyone agrees with the general proposition that the government has to pay for the property it takes, but courts across the country had held that this rule just did not apply to the police. But the police are part of the government, which this victory makes abundantly clear.”

Baker is likely to receive additional compensation: The jury also found that the city’s refusal to pay Baker constituted a violation of her civil rights, making the city liable under federal civil rights law too.

It all started in July 2020, when a fugitive took shelter in Baker’s suburban Dallas home, which had just gone under contract for sale after she’d renovated it. Baker, who had recently beaten cancer and was retiring to Montana, notified police and a standoff ensued.

Eventually, McKinney police decided to attack the house with a BearCat armored vehicle, breaking windows and their frames, destroying the garage door, leveling the backyard fence, knocking down the front door, and firing approximately 30 tear gas containers into the home, which broke drywall. Baker’s daughter’s dog was blinded and deafened in the attack. When police entered, they found the fugitive had already committed suicide.

“I contacted the city of McKinney and asked how to file suit against them for recovery. I was told…there was absolutely no possible recovery, that the city had never paid such a claim and they had no intention of doing that,” said Baker.

Naturally, Baker’s homebuyer backed out of the deal. She proceeded to spend months and tens of thousands of dollars putting the house back in order.

The SWAT team’s extensive use of tear gas meant that, in addition to fixing the damage already described, Baker had to hire a hazardous materials remediation team to clean the entire house. Carpets had to be replaced. To cover the expense, she withdrew money from her IRA and ran up over $20,000 on her credit cards.

Her repeated follow-ups with the city culminated in a letter from an entity that manages liability claims for Texas governments. It read:

“Based on the facts, we have concluded that there is no liability on the part of the City or any of its employees. Per our discussion, the officers have immunity while in the course and scope of their job duties. For this reason, we must respectfully decline this claim in its entirety.”

Destruction by government action is a standard exclusion in homeowners insurance policies. If the city of McKinney didn’t compensate Baker, she’d have to bear the entire cost of the SWAT team’s mayhem.

Enter the Institute for Justice, a national civil liberties law firm on a mission “to end widespread abuses of government power and secure the constitutional rights that allow all Americans to pursue their dreams.”

The Institute for Justice worked with Baker to file a federal suit in March 2021 against the city, arguing that its decision to wreck Baker’s home without compensation violated both the Texas and U.S. constitutions.

“The Supreme Court has repeatedly held that the Fifth Amendment‘s takings clause ‘was designed to bar government from forcing some people alone to bear public burdens which, in all fairness and justice, should be borne by the public as a whole’,” said attorney Jeffrey Redfern in an Institute for Justice video that explained the case (embedded below).

“Pursuing a fugitive is a legitimate government interest, but if the government deliberately destroys innocent people’s property in the process, those people must be compensated,” said Institute for Justice attorney Will Aronin.

“My priority has always been to make sure that cities like McKinney cannot treat other people the way I’ve been treated,” said Baker. “I expect today’s victory to send a message to governments across the country that they have to pay for what they break.”