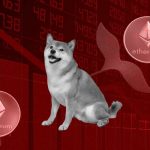 Shiba Inu might have emerged from a meme, but the crypto is no more a joke! Shiba Inu, the ‘Dogecoin killer’ rose exponentially in 2021, making it one of the most viewed cryptos in 2021, beating other popular cryptocurrencies like Bitcoin and Ethereum. Last year, for quite a short period of time, the crypto took over the largest memecoin, Dogecoin to sit at the top of the memecoin pyramid. Since the rise of Shiba Inu, crypto has broken several records. So to continue its winning streak, Shiba Inu has struck again amid the most volatile time of the crypto market.

Despite the unexpectedness, Shiba Inu has managed to attract millions of investors itself and has managed to attract Ethereum whales. The top 100 whales on ETH possess an average of US$14 million in value. And it seems like, Shiba Inu has made itself quite a prominent asset among their holdings. SHIB has finally become the largest held crypto asset for ETH whales after USDC. Shiba Inu’s population continues to grow as mid-term holders have also been redistributed.

The SHIB developers have been working day and night to pave the way toward the top cryptocurrencies in the market. The developers have introduced the crypto to the metaverse. Besides, the launch of the Shibarium network will also facilitate the crypto growth and development and offer the critical capability for smart contracts and transactions to be processed and executed.

As ETH whales are hoarding Shiba Inu tokens, their prices have jumped by almost 15% within a period of 24 hours. For the past several weeks, market analysts and critics have been quite critical of SHIB’s development initiatives. But probably, SHIB might soon rise again with the assistance of a higher power that Ethereum investors would bestow upon the crypto.