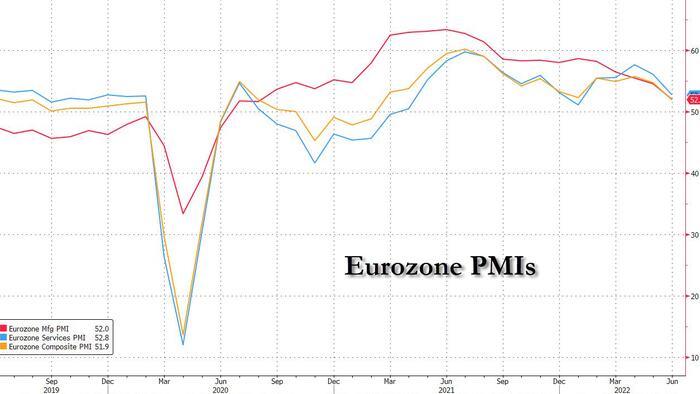 
Many Wall Street analysts were keeping a close eye on today’s PMI barrage around the globe – among the most popular leading indicators for key economic inflection points – for the latest indication that the economy is sliding into recession. They got that and more when the latest PMI data out of Europe was nothing short of a “Horror-show” as Bloomberg called it.

The Euro area composite flash PMI decreased by 2.9pt to 51.9 in June, far below consensus expectations of 54.0 and below the May print of 54.8.

Here are the key numbers (as an aside, responses were collected between 13 and 21 June):

As Goldman explains in its PMI post-mortem, “the weakening was broad-based across countries and sectors, but skewed towards France and services.” Today’s data showed moderating momentum in services and a weak manufacturing sector, where the levels of PMI have now fallen into contractionary territory (i.e. recession).

The composition of the June report was squarely weaker than in May, with new orders, employment, new export and backlogs all declining in June. Notably, both new orders and new export orders are now at levels below 50, reflecting a slowdown in both domestic and foreign demand. Firms’ expectations also decreased further, with the gap between expected future and current output (a measure of pent-up momentum) currently around 1.4 standard deviation below its historical average. Suppliers’ delivery times improved for the third consecutive month in a sign of continued easing of bottlenecks in the manufacturing sector and, while price components moderated slightly, they remain near all-time highs.

The extent of the deceleration observed today was larger than expected and thus today’s data is consistent with expectations of moderating growth in services and further weakening in the manufacturing sector, eventually transforming into a full-blown recession. As such Goldman continues to forecast weak growth in the second half of the year and see risks as skewed towards the downside, particularly in Germany, if gas flows from Russia do not pick up following the end of the pipeline maintenance period in mid-July.

The dismal news understandably sent the EUR tumbling back below 1.05…

… while the sharp slowdown in Europe’s economy put German 10-year yields on track for their biggest decline in more than three months.

The biggest question, however, is whether Europe will slide into recession before the ECB has even had a chance to follow through with any of its hikes, which are supposed to begin as soon as next month… which is also when the European economy is now widely expected to contract, in another dire repeat of the events that pushed the continent into the sovereign debt crisis.