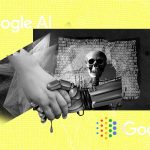 Guy Kelly asked “do the government have a Crungus and the AI knows?” and we all need the answer.

“Crungus” sounds familiar? Must have read in books before, right? A deadly monster that looks horrible. But this time it is going to be real or at least that’s what Google’s AI dreamed about. This is scaring many people because until a few days ago, nobody knew this thing existed. Crungus became the talk of the town after the Twitch streamer and voice actor Guy Kelly posted a screenshot of a DALL-E Mini — now known as Craiyon — prompt featuring the word “Crungus,” along with its abominable results. Does AI know something we humans don’t?

The tweet contained the images of weirdly looking horrible creatures with the message, “Well I REALLY don’t like how similar all these pictures of “Crungus”, a made-up word I made up.

Why are they all the same man? Is the Crungus real? Have I discovered a secret cryptid?”

Though Urban Dictionary has a few definitions of the term “Crungus,” most of which have to do with the detritus that builds up under one’s fingernails and other horrible places, there weren’t any Google results for the term that came up with anything that looked even remotely like the monster that Craiyon dreamed up.

The second tweet by Guy Kelly in the same thread raised many questions as he said, “First of all, I missed an “are” in that. That’s on me. I was scared of the Crungus.

Seriously though. I can’t find anything remotely like this on Google. And they are all SO similar. Is this real now because of me? Does the government have a Crungus and the AI knows??”

Well this is an important question, does AI know something that people don’t? Because this is not the first time AI has discovered things humans cannot imagine in their wildest dream. Now, one fun thing about this is that no such monster exists. The first results for the word on Google reveal that crungus is “the crud and fungus that collects under extremely long fingernails left unmanicured for an extended time”.

Another fun thing is that, despite the previous non-existence of this cryptid, Dall-E reliably spits out the same monster when people type in any variation of Crungus.

So, what’s going on? Well, we don’t have any certain answers, but people do have a few theories. “It’s been really interesting seeing so many people’s different ideas,” Kelly told IFLScience. “Lots of people have said [it’s due to the similarity to] Krampus, but feeding it (the AI, not Crungus) Krampus gives a very different beast.”

In another display that AI can see things that humans inherently can’t, researchers have discovered that AI may be able to identify race from X-ray images, despite there being no clear difference between human experts. Based on X-ray and CT images alone, the AI was able to identify race with around 90 percent accuracy and the scientists are unable to understand just how it can do this.

The results suggest extreme caution needs to be taken when deploying AI in medical technologies, as even when provided images thought to be anonymous, blurry or otherwise corrupted, AI may still be able to characterize them.

The research was published in the Lancet Digital Health. “When my graduate students showed me some of the results that were in this paper, I actually thought it must be a mistake,” said Marzyeh Ghassemi, MIT assistant professor of electrical engineering and computer science, and co-author of the paper, in a statement to the Boston Globe.

The post Google’s AI Finds the Scary ‘Crungus’ that Humans are Yet to Discover appeared first on .