EUR/USD is on the cusp on pushing above the 50-Day SMA (1.0607) as it extends the advance following the Federal Reserve interest rate decision, and a move above the moving average may lead to a further advance in the exchange rate as the testimony from Chairman Jerome Powell does little to curb the advance from the monthly low (1.0359).

EUR/USD appears to have reversed coursed after defending the yearly low (1.0349), and the advance from earlier this month may lead to a test of the former support zone around the May high (1.0787) as it now appears to be acting as resistance.

Looking ahead, it remains to be seen if EUR/USD will respond to the 50-Day SMA (1.0607) as the moving average continues to reflect a negative slope, but the limited reaction to the Fed’s semi-annual testimony raises the scope for a further appreciation in the exchange rate even as Chairman Powell insists that “the American economy is very strong and well positioned to handle tighter monetary policy.”

The comments suggest the Federal Open Market Committee (FOMC) will deliver another 75bp rate at its next interest rate decision on July 27 as officials forecast a steeper path for US interest rates, and it remains to be seen if Chairman Powell will continue to tame speculation for a 100bp rate hike as the central bank head warns that it will be “very challenging” to foster a soft-landing for the economy.

Until then, EUR/USD may stage a larger recovery following the failed attempt to test the yearly low (1.0349), but the tilt in retail sentiment looks poised to persist as traders have been net-long the pair for most of the year.

The IG Client Sentiment report show 60.83% of traders are currently net-long EUR/USD, with the ratio of traders long to short standing at 1.55 to 1.

With that said, EUR/USD may attempt to push above the moving average as it extends the advance following the Fed rate decision, and the exchange rate may ultimately test of the former support zone around the May high (1.0787) as it appears to be acting as resistance. 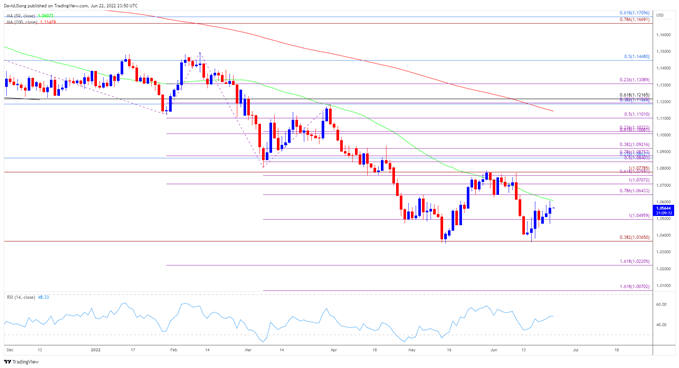