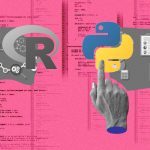 Python and R are often regarded as crucial programming languages for data scientists. You should ideally master both for a well-rounded programming foundation, but where should you begin if you’re new to data science?

According to Stack Overflow data, Python is the world’s fastest-growing programming language. It’s easy to use for beginners, but it also gives web developers the freedom they need to create sites like Spotify, Instagram, Reddit, Dropbox, and the Washington Post. Do you have any idea what a regression is or how to use a caret? Python will provide you with a more welcoming environment, to begin with. Python, like Javascript or C++, is an object-oriented programming language that provides stability and modularity to projects of any size. It gives a flexible approach to web development and data science that appears intuitive, even if you’ve never learned a programming language before. Python training equips programmers with the skills they need to work in a wide range of sectors.

R is a computer language for data analysis and statistics that is domain-specific. It is an important part of the research and academic data science field since it uses statisticians’ specialized syntax. The procedural development paradigm is used in R. Rather than grouping data and code into groups as object-oriented programming does, it splits programming jobs into a series of phases and subroutines. These strategies help visualize how complex procedures will be carried out. R has a sizable user base, similar to Python, but with a focus on data analysis. R, unlike Python, does not offer general-purpose program creation, but it excels at addressing specialized data science problems since that is all it does.

What is the difference between python and R language?

Python is a general-purpose programming language developed for a range of use cases, whereas R is more specialized. Python code may be easier to understand and more widely applicable if this is your first excursion into programming. The R language, on the other hand, maybe more suited to your needs if you already have some experience with programming languages or have specific professional aspirations focusing on data analysis.

Let’s see how R and Python stack up against the criteria data scientists use to make decisions:

Which programming language is better to learn?

Python is the way to go if you want to learn more about computer programming in general. If you only want to work with statistics and data, R could be the better choice. It depends on you which you want to learn and go for. Ask yourself a few questions to help you decide whether to study Python or R initially:

Is Python or R more user-friendly?

Python is far more user-friendly, with syntax that is more akin to that of written English. If you have experience with other languages, though, R makes it easier to display and handle data. Because it’s based on statistics, the syntax is clearer for analysis. R may need more initial effort than Python. R, on the other hand, may make some sorts of chores considerably easier after you’ve mastered the syntax. The more programming languages you’ve learned, the easier it is to learn another.

The post Data Scientists Choose Python Over R: Which One is Effective? appeared first on .