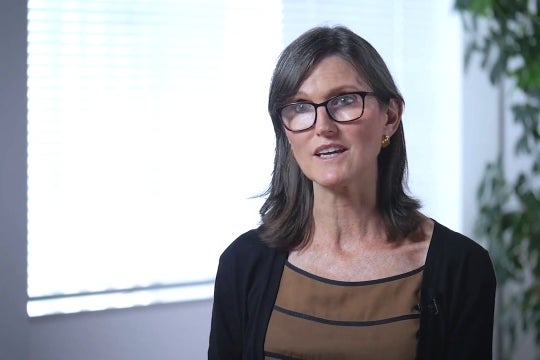 What Happened: Ark Innovation ETF ARKK declined over 10% on May 11 after shares of Coinbase plummeted 26.4% after the cryptocurrency trading platform swung to a $430 million net loss in the first quarter and reported massive declines in active users.

Both ARKK and Coinbase have advanced higher since then — the innovation ETF has risen 16.8%, while the cryptocurrency exchange has soared 24%.

Coinbase is now ARKK’s eighth-largest holding, slipping from No. 5 at the beginning of the year. Ark Invest, however, has been piling up shares in cryptocurrency-linked stocks such as Coinbase and Block Inc SQ on the dip.

ARKK Still Down: The ETF, which also has Roku Inc ROKU and UiPath Inc PATH as key holdings, is down 55% this year.

Tesla shares, which currently rank second in ARKK, have been volatile in the past month and have declined 12% since May 11.
Zoom, which currently sits on the top of the ETF ranking, has advanced 29% during the period, while Roku at the third spot advanced 11%, and Block at No. 4 gained 16.7%. The four stocks together have a 32% weight in the fund.

Wood has previously blamed the Federal Reserve for its rate hikes to tame inflation for the fund’s losses.