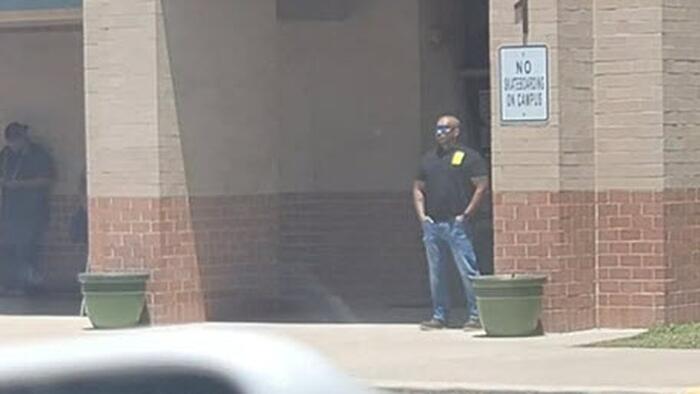 
Authored by Lorenz Duschamps via The Epoch Times,

A picture of a father in Central Texas standing guard at his daughter’s elementary school where his wife also works has gone viral on social media in the wake of this week’s mass shooting incident in Uvalde.

Ed Chelby, a U.S. Army veteran who has a background in security, told KWTX that he couldn’t sleep after news emerged that an 18-year-old gunman killed 19 children and two teachers on Tuesday at Robb Elementary School.

Chelby said he contacted the school’s superintendent to ask for permission to stand guard at the main entrance of Saegert Elementary School in Killeen, which is located about 180 miles northwest of Uvalde.

“I said I would just be out there unarmed to let people know that I’m watching. Let the parents have a little bit of relief,” Chelby said in an interview with the local news station.

“This is just a testament to the sleeplessness caused by the grief I experienced.”

The U.S. Army veteran was already in the process of becoming a volunteer at his daughter’s school and was undergoing a background check when the superintendent approved his application to stand guard outside.

Chelby said with 11 years of experience in the U.S. Army, he isn’t afraid to be in front of the school without a gun.

Parents of other children at Saegert Elementary School have approached Chelby to express their gratitude for what he’s doing.

“I’ve had a lot of emotional people come up to me,” he said,

Eli Lopez, the principal at Saegert Elementary School, told Newsweek that another parent, identified as a veteran mother, has also volunteered to help guard the back entrance of the school.

A makeshift memorial at Robb Elementary School is filled with flowers, toys, signs, and crosses bearing the names of all 21 victims of the mass shooting that occurred on May 24, in Uvalde, Texas, on May 27, 2022. (Charlotte Cuthbertson/The Epoch Times)

Other parents have volunteered for a safety program for the next school year, Lopez told the magazine.

“As I took time to check on them and express my personal appreciation, they both expressed the simple act they felt they were taking on of being present as the least they could do,” said Lopez.

“I was humbled that they demonstrated what it is to be part of the village that cares for each other. Neither one chose this task for recognition.”