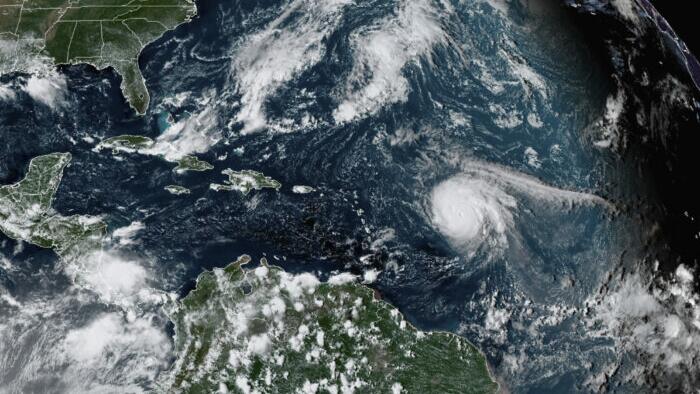 The upcoming Atlantic hurricane season—from June 1 to Nov. 30—is likely to be unusually active, according to forecasters at the National Oceanic and Atmospheric Administration (NOAA), making this the seventh consecutive above-average hurricane season.

“Atlantic #HurricaneSeason Outlook 2022: 70% likelihood of 14-21 named storms of which 6-10 could become hurricanes, including 3-6 major hurricanes,” said the NOAA in a May 24 Twitter post.

“Early preparation and understanding your risk is key to being hurricane resilient and climate-ready,” said Secretary of Commerce Gina Raimondo in the NOAA report.

“Throughout the hurricane season, NOAA experts will work around-the-clock to provide early and accurate forecasts and warnings that communities in the path of storms can depend on to stay informed.”

According to NOAA, the above-average activity in 2022 could be attributed to several climate factors including the presence of an ongoing La Niña event in the tropical Pacific Ocean, warmer-than-average sea surface temperatures in the Atlantic Ocean and Caribbean Sea, an enhanced west African monsoon and weaker tropical Atlantic trade winds.

Strong African Easterly Waves are assisted by an enhanced west African monsoon, which lays the basis for many of the strongest and longest lived hurricanes, said the report.

“As we reflect on another potentially busy hurricane season, past storms—such as Superstorm Sandy, which devastated the New York metro area ten years ago—remind us that the impact of one storm can be felt for years,” said NOAA Administrator Rick Spinrad.

“Since Sandy, NOAA’s forecasting accuracy has continued to improve, allowing us to better predict the impacts of major hurricanes to lives and livelihoods.”

To better understand and predict hurricanes, NOAA plans to operate 5 Saildrone uncrewed surface vehicles during the peak of this year’s hurricane season while coordinating with uncrewed ocean gliders, small aircraft drone systems, and NOAA Hurricane Hunter aircraft to measure the ocean, atmosphere and areas where they meet.

ERO maps the probability of intense rainfall which could lead to flash flooding within 25 miles of a given point.

The biggest danger is when hurricanes and storms result in inland flooding. Flash floods from Hurricane Ida have claimed more lives in the northern Mid-Atlantic than it did along the Gulf Coast, where it made landfall.

“Hurricane Ida spanned nine states, demonstrating that anyone can be in the direct path of a hurricane and in danger from the remnants of a storm system,” said FEMA Administrator Deanne Criswell in the NOAA report.

“It’s important for everyone to understand their risk and take proactive steps to get ready now by visiting Ready.gov and Listo.gov for preparedness tips, and by downloading the FEMA App to make sure you are receiving emergency alerts in real-time.”

The NOAA outlook is for overall seasonal activity and is not a landfall forecast.