On Tuesday, futures on the , , , and fell as a from social media giant, Snap (NYSE:) reignited the market selloff.

Despite the positive reaction on Monday to the outlook for improved trade with China, last week’s worries on economic growth, following weaker results from (NYSE:) and (NYSE:), have snapped back. As a result, the looks likely to reach a level 20% lower than its high, the definition of a bear market.

Gold advanced while the dollar slipped.

Snap’s warning that the economic slowdown will dent its Q2 results sent shares of the social media giant down 30% in pre-market trading. The news sent all US futures lower with contracts on the NASDAQ 100 sliding 1.8%.

The outlook for future earnings from Snap fits well with a broader theme we’ve recently mentioned frequently. Tech stocks tend to sell off first in a rising environment as investors seek value in cyclical stocks. The rising cost of money makes it more challenging to justify the high valuations in the tech sector. Therefore, -listed, traditional industries are outperforming as investors refocus on the ongoing increase in global inflation as well as rising rates.

This is why the technology sector is also the worst performer on the Index today.

The pan-European index may be forming a Rising Flag, bearish following the initial plunge. If there is a downside breakout, completing the pattern, the benchmark will be on a path to test the Mar. 7 low. A lower trough would extend the peak-trough downtrend and satisfy even conservative technicians, with two highs and lows independent of the previous trend.

Markets in Asia also closed in the red. China continued to suffer amid its ongoing coronavirus crisis. The plummeted 2.4%. 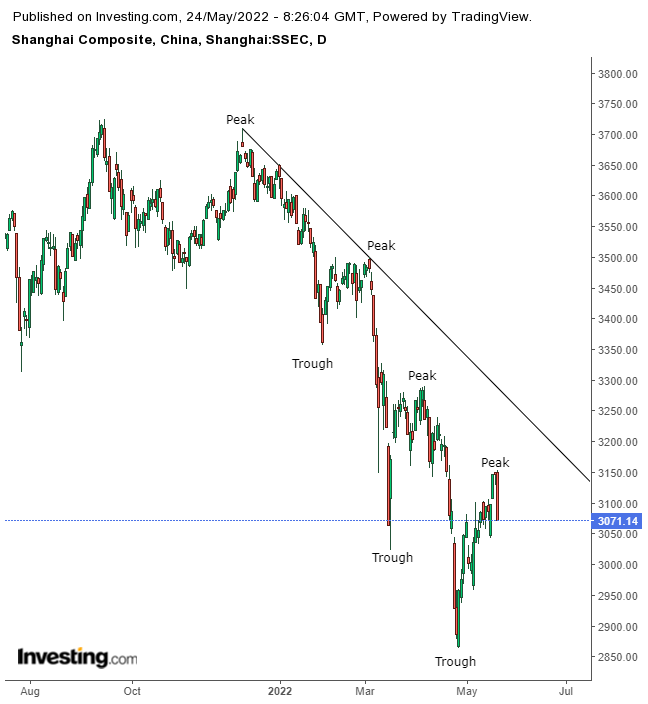 Another such decline would extend the downtrend with another lower peak.

Australia’s dug in its heels, losing only 0.28%. The technology sector in the land down under fell 2.9%, but a rally in real estate and bank stocks offset the slump. However, the risk appears to be to the downside for the regional benchmark. 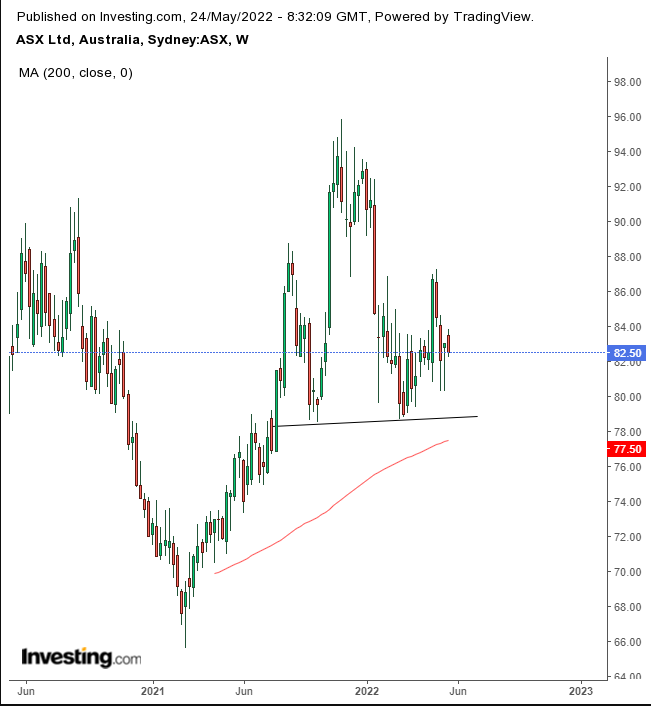 The index has been developing an H&S top since August 2021, with the 200-week MA realigning with the neckline.

Yields on the US Treasury note fell as investors moved into the safety of the bond market. However, there is a view emerging that the between stocks and bonds could be coming to an end. 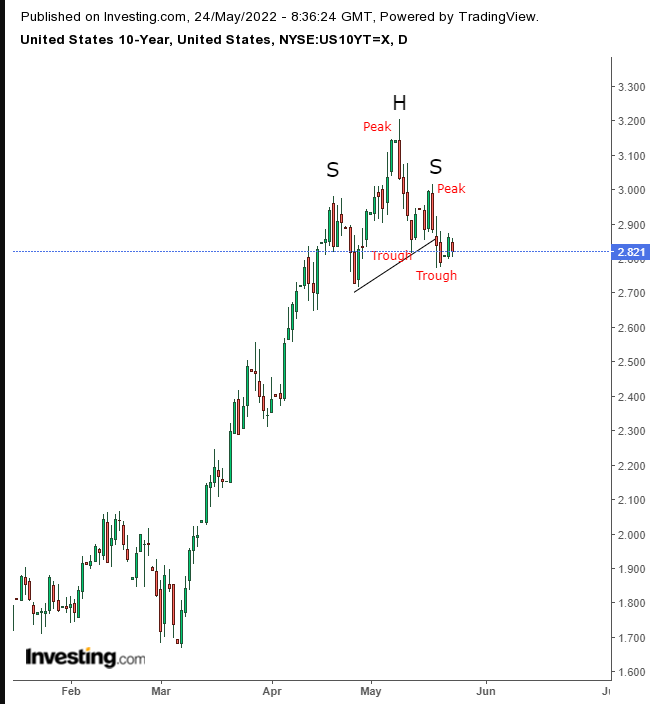 After indicting rising rates, increasing yields since the March bottom flipped the correlation with stocks to negative. However, investors turned to Treasuries for their traditional haven status amid the recent sharp equity selloffs.

The fell for a second day. 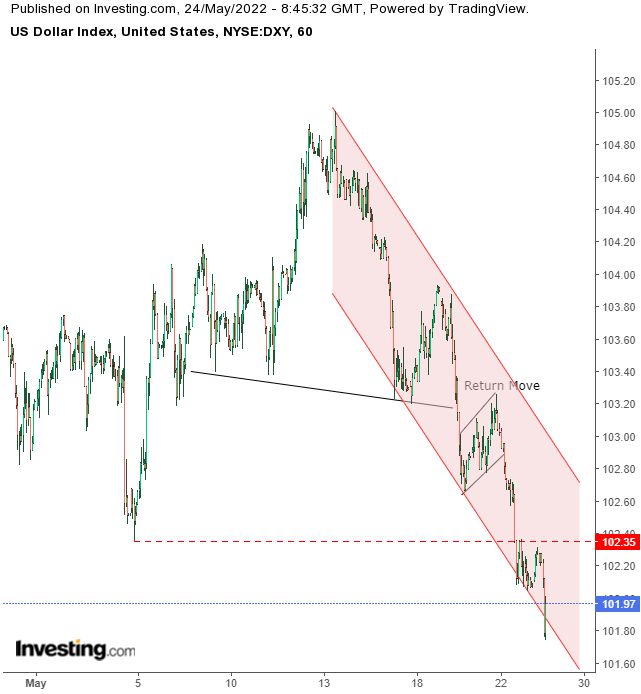 Yesterday, we attributed the weakness to ECB President Christine Lagarde’s comments about ending negative rates and the ‘s haven status, which was scoffed at amid an equity rally. However, today’s risk-off mood hasn’t pushed the greenback higher, leaving only a strengthening euro—the dollar’s single largest currency opponent—and bearish technicals.

The USD fell to a monthly low, extending the short-term .

Dollar weakness, as well as better technicals, paved the way for an extension of the rally in —its fourth straight-up day. 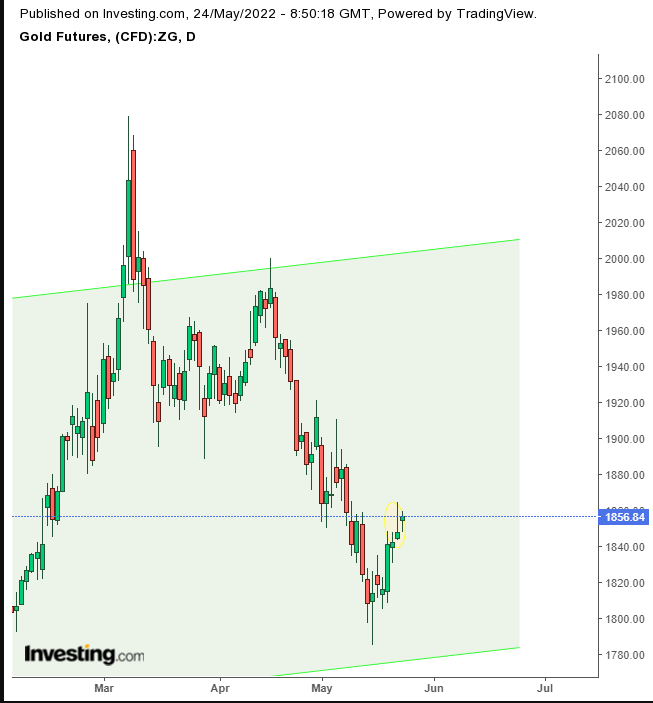 The yellow metal protracted the bounce from the bottom of its Rising Channel since its March 2021 low, though beware of Monday’s Shooting Star. A shooting star occurs when bulls fail to advance. However, confirmation is required. If today’s close is below yesterday’s high, it may reinforce the Shooting Star’s resistance, though a close below the single-candle pattern will confirm a reversal.

remains under pressure—and back under $30K at time of writing—after yesterday’s drop which erased two days of gains. 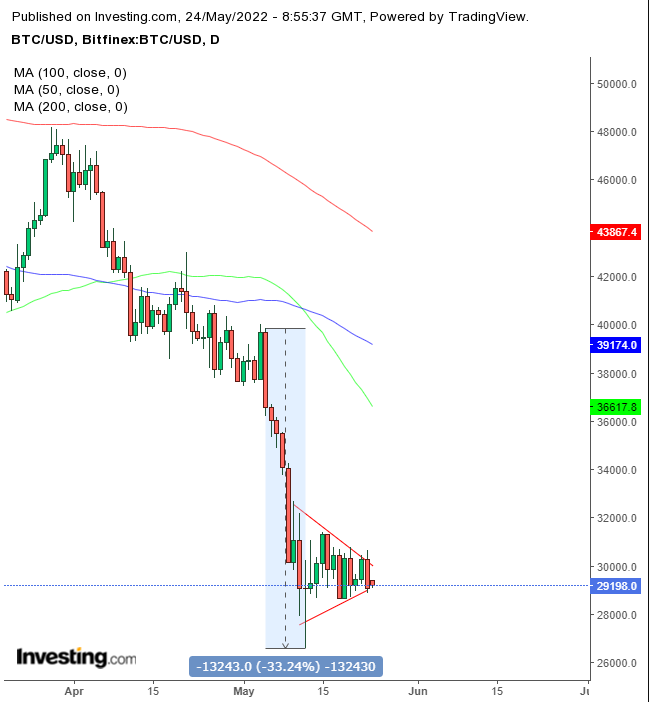 The digital currency may be trading according to a pennant, a continuation pattern. Therefore, there is a higher likelihood of a downside breakout following a five-day straight drop.

However, the price appears to meander through the apex, which could mean there is no guiding force amid this congestion. Unless there is a decisive downside breakout, this isn’t a pennant. If, however, the pattern will follow through, it would complete the most oversized top the leading cryptocurrency has developed yet.

declined for the second day, then recovered, after hitting its highest level since Mar. 24. 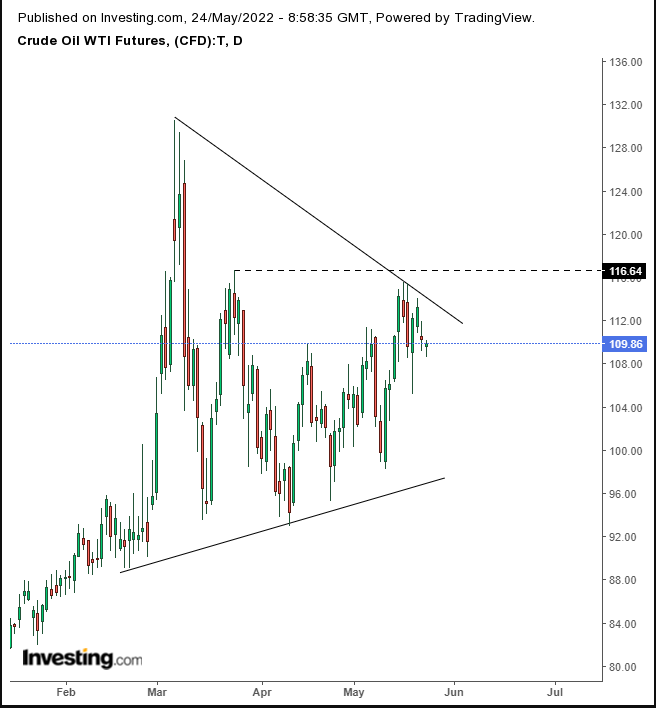