The Australian Dollar rallied to start the week after the Australian Federal election saw a change of government.

The Labor party will replace the Liberal/National coalition, but it is not clear at this stage if they will lead outright, or if they will need to form a minority government.

The two main parties ran centrists’ campaigns with the key policy differences being on climate change and the establishment of a national anti-corruption watchdog. The economic impact is seen to be fairly minimal.

The broader risk on sentiment to open Monday has lifted equity markets and risk associated currencies such as the Aussie and the Kiwi.

At a debt summit in Sydney today, Reserve Bank of Australia Assistant Governor Chris Kent confirmed that the RBA will not be re-investing the proceeds from maturing bonds.

These are the bonds that were accumulated during the banks quantitative easing (QE) program in response to the pandemic. By allowing the bonds to roll off, this is quantitative tightening (QT).

Should the need arise, the bank could tighten further by selling the bonds to the market before they mature.

Although the market had been anticipating such action, it further emphasises the banks desire to rein in loose policy in the face of accelerating inflation. They raised the cash rate by 25 basis points at their meeting earlier this month.

The latest data shows CPI is running at 5.1% year-on-year to the end of the first quarter, well above the banks’ target range of 2-3% on average over the business cycle. The April unemployment rate came in at a 48-year low of 3.9%.

Conditions are ripe for tightening and the market is pricing in a 25 basis points hike at their June meeting. A 40 basis-point lift cannot be ruled out.

In the neighbourhood, the RBNZ are meeting on Wednesday and the market is anticipating that they will hike by 50 basis points.

AUD/USD has bounced off a recent 2-year low but remains within a descending trend channel.

Bearish momentum appears to have stalled with the price crossing above the 10-day simple moving average (SMA)and could be about to sustain a move above the 21-day SMA.

Underlying medium and long–term bearish momentum may continue to evolve with the price remaining below the 55-, 100- and 260-day SMAs. 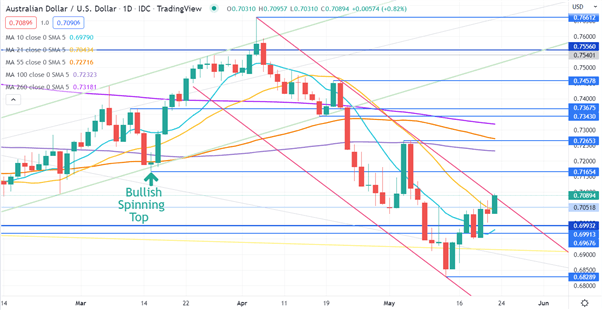 After making a 7-year high at 95.74 last month AUD/JPY pulled back to make a low at 87.30 and has consolidated since.

It may bump up against resistance at the 50% Fibonacci Retracement level of this overall move at 91.50. 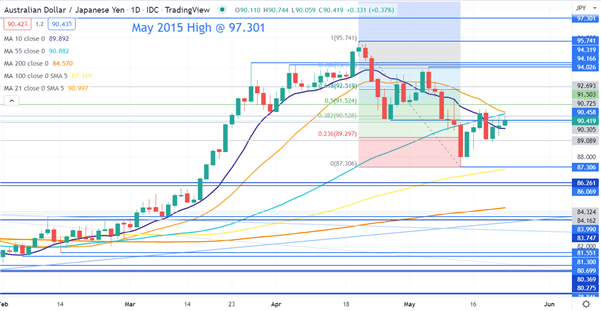