USD/JPY has been in a 125.00 – 131.26 range for a month and has broken below the lower bound of an ascending trend channel that started in early March.

The stall in price has seen it cross below several short term simple moving averages (SMA). The gradients of the 5-, 10- and 21-day SMAs have rolled over and are either negative or flat. This may suggest near term momentum has paused.

The medium and longer term 55- and 200-day SMAs remain well below the price with positive gradients which could indicate that underlying bullish momentum remains.

A break below the bottom end of the range could open up a test of a potential support zone of 125.10 – 125.28. A test in a week or so may see the 55-day SMA also around that level. A break below there might see bullish momentum further questioned.

After making a 7-year high last month, CHF/JPY appears to have lost bullish momentum. The price has crossed below the 10-, 21-, 34- and 55-day simple moving averages (SMA).

The 10-, 21- and 34-day SMAs have rolled over and now have negative gradients. Further suggestive of bearish momentum unfolding has been a series of Death Crosses.

The price closed outside the lower band last week and after it closed back inside the band it managed to rally toward resistance at 130.77, which may still offer resistance. The 55-day SMA is also currently dissecting near that level. 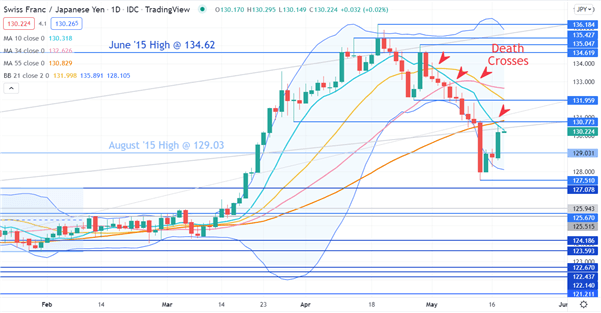