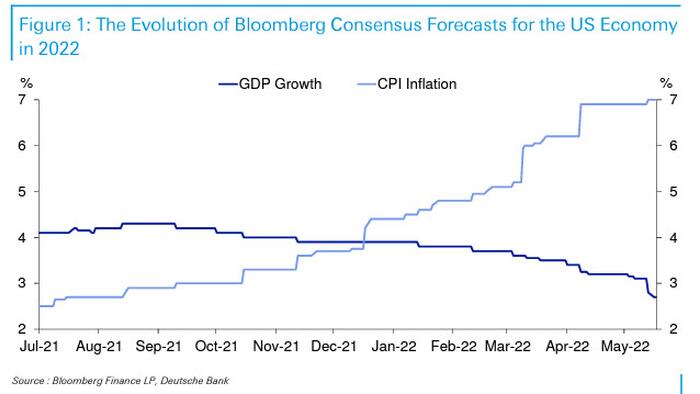 
In a recent ‘Chart of the Day’ from DB’s Jim Reid, the credit strategist makes it very clear not only what comes next to the US economy (that would be stagflation for anyone who happens to be an idiot, or is a central banker, but we repeat ourselves), but also how much the consensus has moved for the US economy over the last year.

And while Reid would still not call real GDP growth at just below 3% this year “stagflation,  he admits that the direction of travel is clearly moving in that direction, especially for 2023, which is when DB’s base case for a recession kicks in (to this day, DB remains the only bank which has recession penciled in as its 2023 base case; we expect every other bank to follow suit in the next 2-3 months).

One interesting aside noted by Reid is that the chart implies nominal GDP forecasts have gone up from around 6.5% to just under 10% for 2022. If you add in the fact that the dollar is up over 10% over this same period then the US economy will not only be bigger than expected but its relative growth to most other countries will be huge in dollar terms.

Yes, while this guarantees harder times are likely ahead but one big positive is that this scenario helps control the debt burden for now, which of course is precisely the thinking behind “inflate away the debt.”

Indeed, Debt/GDP has been and is expected to be on an upward path for as far as the eye can see. However in 2022, if these forecasts are correct, the denominator could rise a stunning 10%. In fact, US Debt/GDP could actually fall slightly even with a near -5% deficit.

It goes without saying that Treasury yields that are currently -7% below this forecast for nominal GDP help enormously: “This is financial repression at its best.”

Going back to Reid, the strategist writes that in his annual long-term study in 2019, “The History and Future of Debt” (link here for all those that want to see how debt has been managed in the past and how it might be managed in the future), the editorial suggested a world of “higher debt, higher inflation, higher nominal GDP, higher yields and higher central bank balance sheets. Bondholders beware!”.

Well, looking back now, Reid says that “it all happened much faster than I expected due to covid but I would still expect yields to be below inflation and nominal GDP for the rest of my career. That’s the only realistic way of controlling the huge global debt burden but will require bondholders to see long periods of negative real returns.”

So although the world is in a tough place at the moment, surging nominal GDP, but with still relatively low yields, is helping to control the huge global debt burden for now.