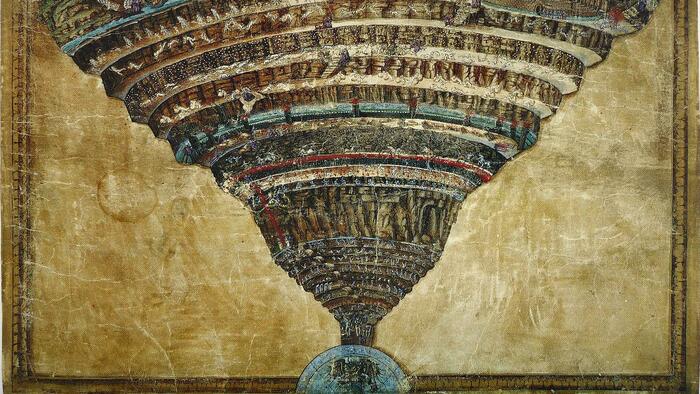 Below is my column in the Hill on claims being made about the post-Roe world and the sweeping away of such rights as interracial marriage and the use of contraceptives. The “parade of horribles” seems to get longer by the day but it may actually be undermining the good-faith arguments made by pro-abortion advocates.

The Map of Hell painting by Botticelli

Here is the column:

The New Yorker magazine ran a cover in 1976 showing the view of the country from 9th Avenue. The map by Saul Steinberg showed civilization largely ending at the New Jersey border with a vast wasteland between New York and the Pacific Ocean.

It appears that, for some people, not much has changed with that view of America.

Recently the editors of the New York Times seriously warned that some states likely would outlaw interracial marriage if Roe v. Wade is overturned:

“Imagine that every state were free to choose whether to allow Black people and white people to marry. Some states would permit such marriages; others probably wouldn’t.”

It is hard to imagine because it is utterly untrue. Nothing in the Supreme Court’s leaked draft opinion in Dobbs v. Jackson Women’s Health Organization supports such a dire prediction. To the contrary, the draft expressly states that “Nothing in this opinion should be understood to cast doubt on precedents that do not concern abortion.” Indeed, such a motive might come as something of a surprise to Justice Clarence Thomas, given his own interracial marriage, or to Justice Amy Coney Barrett, given her own interracial family.

The purpose of the Times’ commentary seems to be to inflame rather than inform readers. And that is consistent with the position of politicians and pundits who raised alarms, even before the leak, over the need to reignite anger among voters to avoid a disaster in the midterm election. On MSNBC, for example, Rep. Madeleine Dean (D-Pa.) agreed with John Heilemann that Democrats must “scare the crap out of [voters] and get them to come out.”

The Times editorial is part of a “parade of horribles” that is becoming increasingly grotesque in its exaggerated claims. MSNBC’s Andrea Mitchell and former Clinton Attorney General Eric Holder had a preposterous discussion of how if Roe goes down, Brown v. Board of Education could be next. MSNBC’s “The ReidOut” host Joy Reid falsely told her audience that the decision “could apply to almost anything” in not just prohibiting interracial marriage but overturning the Brown decision.

An apocalyptic post-Roe hellscape can be a motivating image, but only to the extent that it is credible.

The problem is that the claims are detached from both legal and political realities.

Consider three of these claims on interracial marriage, contraception and same-sex marriage:

With polls showing that 94 percent of Americans support interracial marriage, the Times editors do not bother to name the states that are largely composed of the remaining 6 percent.

The claim is even less credible legally than it is politically. The leading case on interracial marriage, Loving v. Virginia, was based on different constitutional grounds and would not be negated by this opinion. While the court did discuss the due process right to marriage, it was primarily handed down on equal protection grounds due to the inherent racial classification. Then-Chief Justice Earl Warren wrote: “The clear and central purpose of the Fourteenth Amendment was to eliminate all official state sources of invidious racial discrimination in the States … There can be no doubt that restricting the freedom to marry solely because of racial classifications violates the central meaning of the Equal Protection Clause.”

It might be a good comedic line — but this and similar claims make no constitutional sense. There is no reason to believe that interracial marriages would be banned in a post-Roe world.

The cries of alarm include other areas expressly addressed in the draft opinion as not impacted by its analysis. For example, many critics claim that contraception could soon be outlawed even though the court’s draft specifically dismisses such claims: “Roe’s defenders characterize the abortion right as similar to the rights recognized in past decisions involving matters such as intimate sexual relations, contraception, and marriage, but abortion is fundamentally different, as both Roe and Casey acknowledged.”

It is true that some activists have sought to outlaw IUDs and Plan B prescriptions as “abortion-inducing.” However, putting aside that the draft opinion expressly distinguishes the contraception cases, there is no basis for suggesting that the court would eradicate any semblance of personal privacy and intimacy protections under the Constitution. Such sweeping transformation of the private lives of Americans would involve curtailing a host of other rights, including equal protection. Moreover, there would be considerable practical barriers to such bans in preventing interstate availability of contraceptives.

The polling on this issue is even more lopsided. While the public remains supportive of limits on abortion, some 83 percent support to the availability of contraceptives. Only 6 percent favor making contraception illegal.

In 2015, the court voted 5-4 to strike down bans on same-sex marriage. The court’s specific foundation for this right has continued to be mired in controversy. Even some of us who had long supported same-sex marriage raised concerns at the time over the reliance of Justice Anthony Kennedy in his decision on a “right to dignity.”

Once again, however, the court in this draft opinion distinguishes abortion from other areas as involving claims of an “unborn human life.” Nothing in this opinion endorses a ban on same-sex unions.

However, even before this draft opinion was leaked, there were calls for a better-articulated foundation than the one laid out in Obergefell v. Hodges. As with interracial marriage, many of us have argued for an equal-protection foundation for the right.

Putting this aside, the politics on this issue has changed dramatically in the last decade. Polls show that 70 percent of Americans support same-sex marriage.

Roe is not the basis for all of these rights, and its basis has long been debated. Nevertheless, columnist Maureen Dowd has declared that the “antediluvian draft opinion is the Puritans’ greatest victory since they expelled Roger Williams from the Massachusetts Bay Colony.”

Such claims, however, ignore that the basis for the original decision was questioned even by liberals. Harvard Law Professor Laurence Tribe wrote that “one of the most curious things about Roe is that, behind its own verbal smokescreen, the substantive judgment on which it rests is nowhere to be found.” At least some of the court’s justices clearly hold many of the same doubts over the basis for Roe in the Constitution.

There is ample cause for pro-abortion advocates to organize over the loss of Roe. However, those claims are only undermined by a parade of horribles that leaves both the case law and credibility behind.

A cynic might wonder if Democratic leaders in Congress truly want to preserve the status quo of Roe. After all, their recent proposed codification of Roe went beyond the draft decision, which the leadership knew would lose critical votes in the Senate — but which may provide what they hope will be a powerful rallying cry for the midterm elections.