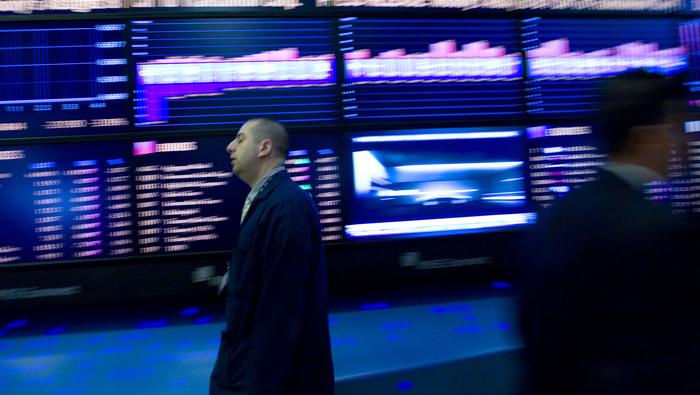 After a long spate of selling on Wall Street, the mood veered from fear to cheer last Friday, sparking a robust upswing in the equity space, and increasing bets that the relentless 2022 sell-off has ran its course and ended. The rally raised hopes that stocks could stop the bleeding and begin to stabilize in the near-term, but the upbeat sentiment was short-lived, with shares falling again on Monday, a sign that traders are not fully convinced that the worst is over and remain reluctant to participate in upside speculation.

At the closing bell, the S&P 500 declined 0.39% to 4,008 after oscillating between positive and negative territory for most of the session. The Dow Jones escaped weakness and notched a tiny 0.08% gain to finish the day at 32,223. Meanwhile, the Nasdaq 100 underperformed its major peers, sinking 1.16% to 12,243, weighed by broad tech sector weakness, with Tesla shares plunging almost 6% following rumors that Elon Musk is trying to back out of the deal to buy Twitter. Many analysts suggest that Musk never intended to acquire the social media firm, but instead hatched the plan so that he could dispose of a small stake in the company he presides while the stock price was high, without prompting a negative market response.

Looking ahead, all eyes will be on U.S. retail sales on Tuesday. The data will offer traders an opportunity to gauge the health of consumer spending at the start of the new quarter, and whether Americans continue to maintain a strong level of consumption despite falling real incomes. In terms of expectations, April advance monthly sales for retail and food services are seen rising 0.9%, following a 0.5% increase in March.

To shore up sentiment and ease mounting recession concerns, retail trade report needs to show that U.S. consumers are still in good health thanks to their solid balance sheets and increasing wages amid tight labor markets. On the flip side, if data disappoint and reveal a rapid slowdown in spending, investors’ mood could deteriorate further, paving the way for stocks to resume the free-fall witnessed earlier this month; after all, there is no worse scenario for corporate earnings than one of soaring inflation, no growth, and rising rates.

The S&P 500’s performance disappointed at the start of the new week after Friday’s solid rally, with no follow-through on the topside, a sign of low confidence in the market’s ability to mount a rebound.Despite Monday’s small pullback, the index managed to hold above key support around the psychological 4,000-level. If bulls defend this floor and spark another move higher, initial resistance lies at 4,060, followed by 4,115. On further strength, the focus shifts upwards to 4,165, though there is no need to become overly optimistic at this point considering that the balance of risks is tilted to the downside.

On the other hand, if strong selling momentum resumes and the equity benchmark drops below the 4,000 zone decisively, price could be on its way to retest the 2022 lows near 3,858. This is a major support and a line in the sand so to speak. Why? Because a break to the downside would confirm a bear market for the S&P 500, a period of prolonged declines in which the asset in question has fallen 20% or more from a recent peak. Although a bear market does not in itself predict future returns, it can certainly increase pessimismwhile reducing risk appetite.