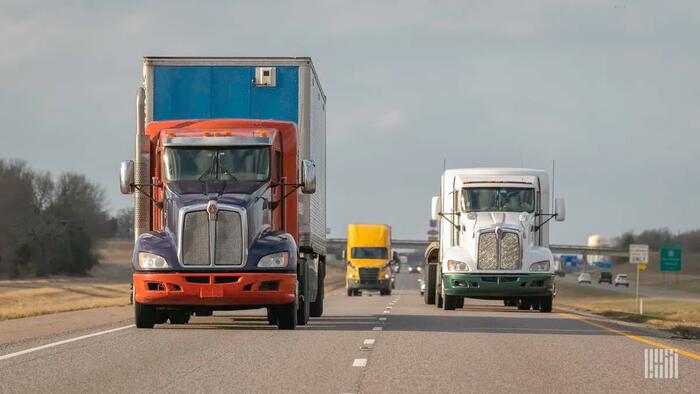 
By Craig Fuller, CEO of FreightWaves

Over the past four days, the deterioration in truckload van spot rates has accelerated, falling over $.02 per mile per day on the FreightWaves National Truckload Index Linehaul Only ([fuel removed] 7-day moving average (SONAR NTIL.USA). In the past seven days, van truckload spot rates fell by $0.011/day and $0.007/day in the prior three weeks.

The acceleration in the rate of decline is remarkable, especially considering the time of year. May and June are normally considered among the busiest times of year for truckload volumes and the early summer months rival the holiday retail season in terms of peak spot rates.

The phrase “100 days of summer” is used in the trucking industry to describe the time of year when beverages, construction, and summer goods all surge. This year, the market is doing the opposite.

DAT, one of FreightWaves’ loudest critics, has dismissed our view of the weakness in the trucking spot market for nearly two months. However, DAT has now capitulated and admitted that the decline it is now acknowledging is unprecedented. In a market update posted on May 10th, DAT’s analyst commented that “in the entire history of Ratecast it has not observed a drop of this magnitude and duration.”

FreightWaves agrees (and led the market in pointing it out). We have been warning since March 24th about the unprecedented deterioration in the spot market.

The decline coincides with the largest level of cost increases to ever hit the trucking industry. Inflation is roaring, with wage, maintenance, equipment, insurance, and most importantly fuel squeezing spot truckload carriers. Retail diesel is up $0.53/gallon in the past 30 days alone. For a carrier averaging 6.5 miles per gallon, this translates to a cost increase of $.08/mile.

In the same 30-day period, spot linehaul rates have declined by $0.28/mile. This $0.36/mile headwind (additional diesel fuel cost plus the decline in spot linehaul rates) is something that trucking spot carriers are having to contend with.

Large carriers have been fairly isolated from spot market conditions. These carriers get 90% of their truckload freight from the contract freight market and don’t experience the rapid volatility of the spot market. Shippers are reluctant to pull freight or negotiate contract rates until they have confidence in the stability of the market or the spread between spot and contract rates is so significant that they will move long-term annual contracted commitments to weekly or quarterly mini-bids. We’ve heard that some food shippers in particular are waiting to see how produce season plays out before adjusting contract pricing.

But from our channel checks, we understand that this process has started, at least among providers that don’t have trailer pools in the routing guide. This likely means capacity booked by a spot market carrier is under the most pressure but may begin to include loads tendered to freight brokers under a contracted rate as well.

Currently, that is not showing up in FreightWaves data on contract van rates, but we are not seeing an acceleration in contract rates, either. The spread between contract and spot rates has never been wider.

Uber’s Bill Driegert, co-founder and head of operations at Uber Freight, said spot rates have plunged 30% since January and warned that this is putting pressure on contract rates as overall demand remains flat.

The widest gap between the two indices was on March 21, 2021, when spot rates were $0.31/mile more than contract rates. This was bullish for contract rates, as shippers and carriers rushed to negotiate new contract rate agreements. Shippers will likely aspire to do the same thing when rates are on the way down.

Cass Information Systems published its monthly index on May 12th; it highlighted the current situation in the freight market. The Cass index is assembled through freight audit and payment services that the firm offers. The data comes from audited transactions received from contractual relationships between shippers and carriers, meaning it doesn’t track broker to carrier spot, but contractual freight relationships in the tender market.

Freight volumes fell 3.5% (seasonally adjusted) from March 2022 and 0.5% year-over-year. The commentary from the report stated, “After a nearly two-year cycle of surging freight volumes, the freight cycle has downshifted with a thud.”

The Cass report goes on to declare that “the prospect of freight recession is now considerable, as substitution from goods back to services spending picks up pace, and as inflation slows overall spending, particularly via higher fuel prices and by pressing up interest rates.”

With falling volumes now becoming a reality in the contracted freight market, it is inevitable to conclude that shippers are going to be feeling the pressure to address it with rate concessions and rebids.

There is some caution that shippers should exercise when going through this process. There are so many variables that are nearly impossible to predict. Examples include the duration of COVID-related lockdowns in China, future diesel prices, geopolitical conflicts, and the economy at large. None of these have ever been more opaque.

Shippers will want to avoid moving too aggressively to destroy their routing guides, as anyone who has spent time in the freight market knows, the pendulum always swings the other way and the most dangerous thing for a supply chain is to be short of capacity on the date of tender.