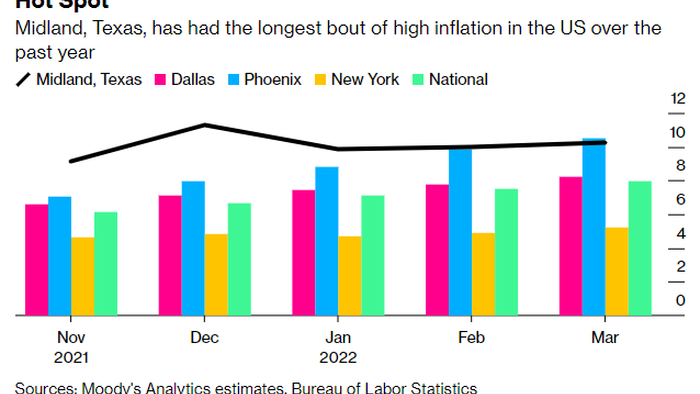 
Midland, Texas is just one of the many American cities that is struggling to keep pace with scorching inflation in the country.

The city, whose economy relies on oil, was called the “number 1 spot for inflation” by a new Bloomberg profile of its residents, who shared stories of how the rising cost of living was negatively affecting everyday life.

Inflation in Midland has been at about 10% for the last 6 months, the article notes, resulting in “menus at local restaurants [with] sticky notes telling diners that prices have been raised” and a gallon of gas reportedly costing about $6.

Additionally, “hundreds of cars” line up outside the area’s largest food bank every Wednesday. The West Texas Food Bank in Odessa has seen a line of cars growing longer every week, with numbers rivaling that of what they were doing peak Covid crisis in 2020.

Jesus and Nativia Zepda, who have waited in the line, told Bloomberg: “The only food I can buy at the grocery store anymore is eggs and beans.”

Another resident, Eduardo Gama, told Bloomberg that his wages haven’t kept up with inflation. Libby Campbell, chief executive officer of the West Texas Food Bank, said: “With the cost of living out here and inflation — people just aren’t able to keep up.”

Single mom Melinda Hernandez lives with her 19 year old son in southern Midland. She lost her primary job and has been delivering pizza’s for $10/hour. She said: “I don’t want to fail my son and it’s my fear.”

Legendary Barn Door Steakhouse owner Roy Gillean, who is based on Odessa, has raised the price of his Tomahawk steak “several times”. It’s priced at $62 but should be priced “closer to $70,” he said.

Bo Garrison, owner of Permian Dirt Works LLC, was told there were no more bulldozers available for him, nor were their any additional Ford F-250’s to be bought “until at least 2023”. Garrison’s business use about two dozen trucks, excavators and bulldozers on a daily basis.

He has raised wages up to 20% over the past year and pays “nearly double” what he paid for fuel a few months ago. “How much cash do I keep putting in without knowing what will happen in the end?” he said.

“Now I gotta cross my fingers and pray that my mechanics are taking care of the equipment because if they break, that’s it,” he told Bloomberg.

Nonprofit Christmas in Action, which repairs homes for elderly owners, said that water heater prices have “doubled” along with lumber and siding over the past year. Nathan Knowles, director of operations, told Bloomberg: “When prices make a big jump like this, they just don’t come back down.”

The biggest health-care provider in the region, Medical Center Health System, will be asking insurers in October to reimburse more for procedures. President Russell Tippin said: “The only thing I know is that it will go up and if it goes up, it’ll come down. But this is the first time I’ve doubted that. West Texas is experiencing double inflation — oil inflation and then the inflation of gas and milk and everything else.”