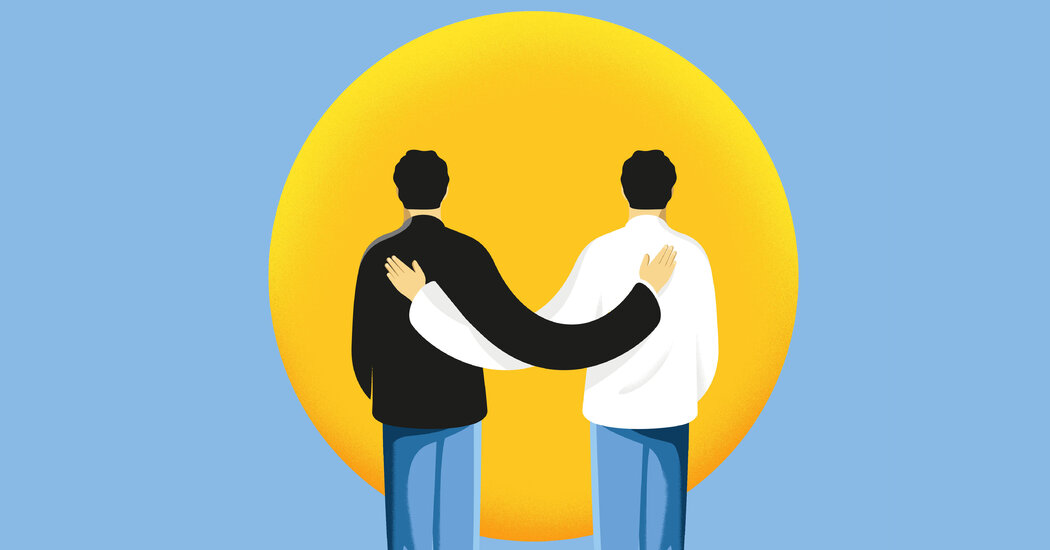 
An ongoing argument my husband and I have —  which has become more contentious during the pandemic — is about how many friends we should have.

We both have one or two close friends and siblings we like to spend time with. Plus, we are busy parenting two young boys who sap most of our energy. As a textbook introvert, this feels like plenty of friends to me. Excessive, even. But my husband is an extrovert who comes alive around other people. As we slowly emerge from the pandemic, I can feel him yearning for more.

He’s not alone. For years, friendship in America has been in decline, a trend that accelerated during the pandemic. Three decades ago, 3 percent of Americans told Gallup pollsters they had no close friends; in 2021, an online poll put it at 12 percent. About a year into the pandemic, 13 percent of women and 8 percent of men age 30 to 49 said they’d lost touch with most of their friends.

There are health implications to all of this. Friendship can be an important factor in well-being, while loneliness and social isolation — distinct but related conditions — can be associated with an increased risk for conditions like depression and anxiety or heart disease and stroke. An often-cited 2010 meta-analysis led by Julianne Holt-Lunstad, a professor of psychology and neuroscience at Brigham Young University in Utah, concluded that loneliness is as harmful to physical health as smoking 15 cigarettes a day.

“It’s a natural question,” Dr. Holt-Lunstad said about the “ideal” number of friends. “Just like we have guidelines and recommendations for the amount of sleep we get and how physically active we are, this is health relevant.”

While she and other friendship researchers admit there aren’t many studies that have specifically tackled the question of how many friends people should aim for, those that have been done offer a range — and somewhere between three and six close friends may be the sweet spot.

What does the research say?

If your goal is simply to mitigate the harmful impact loneliness can have on your health, what matters most is having at least one important person in your life — whether that’s a partner, a parent, a friend or someone else, said Jeffrey Hall, a professor of communication studies at the University of Kansas.

“Going from zero to one is where we get the most bang for your buck, so to speak,” Dr. Hall said. “But if you want to have the most meaningful life, one where you feel bonded and connected to others, more friends are better.”

The best-known theory of how many friends people can (though not necessarily should) have comes from British psychologist and anthropologist Robin Dunbar. What has come to be known as Dunbar’s number contends that humans are only cognitively able to maintain about 150 connections at once (subsequent research has put the number higher). That includes an inner circle of about five close friends, followed by larger concentric circles of more casual types of friends.

Other estimates are in a similar ballpark. One 2016 study suggested people who have six or more friends have improved health throughout their lives, while a 2020 study by Suzanne Degges-White, professor and chair of the Counseling and Higher Education department at Northern Illinois University, found that middle-aged women who had three or more friends tended to have higher levels of overall life satisfaction.

Those estimates seem to track with people’s sense of how many friends they should be shooting for. Dr. Degges-White recently conducted a survey of 297 adults, which has not been published or subject to peer review but found that 55 percent of participants believed two to three close friends was ideal, while 31 percent thought four to six was the goal.

But all of this can be really challenging to study, because friendship and intimacy are subjective, and there isn’t a widely used scale researchers share to define those concepts across studies. Closeness can be particularly squishy. Dr. Degges-White said that to a certain extent it’s a case of: “In your heart, you know the difference.”

It’s also unclear how social media factors into all of this, as research suggests the size of a person’s online network may not have any meaningful impact on their perceived well-being. While many friendships have faded during the pandemic, many people have found connection online.

How can you tell if you need more friends?

While friendship research offers some benchmarks, it may be more useful for most of us to simply do a bit of soul-searching. Marisa Franco, a psychologist and author of the forthcoming book “Platonic: How The Science of Attachment Can Help You Make — and Keep — Friends,” recommends starting with a fairly obvious but powerful question: Do I feel lonely?

“Loneliness is a sort of signal or alarm system,” Dr. Franco said. Everyone feels lonely from time to time, but this is a deeper question about whether you regularly feel left out or isolated. One recent survey suggested that roughly one in three Americans have experienced “serious loneliness” during the pandemic.

It also helps to ask yourself if there are parts of your identity that feel restricted, Dr. Franco said.

Of course, making friends in adulthood isn’t always easy. Research shows people struggle with it because they find it difficult to trust new people, and because they are simply crunched for time. For those reasons, it is often easier to start by rekindling old relationships that have fizzled, Dr. Franco said. Take initiative and don’t assume that friendships just happen organically, she said. But be judicious. Spending time with friends you feel ambivalent about — because they’re unreliable, critical, competitive or any of the many reasons people get under our skin — can be bad for your health.

The amount of time you actually spend with your friends matters, too. Dr. Hall’s research suggests that on average, very close friendships tend to take around 200 hours to develop. Quantity and quality go hand-in-hand.

To a tired introvert like me, the effort that requires just sounds exhausting. Luckily, Dr. Hall added that finding three to six friends “isn’t a magic number” for everyone. “Your personality and the characteristics of your life are going to make a difference,” he said.

So maybe my husband is right — when I am no longer consumed by pandemic fatigue and child-rearing, I might kick myself for not having done more to build a solid group of friends. But I’ve got time to bring up my numbers.