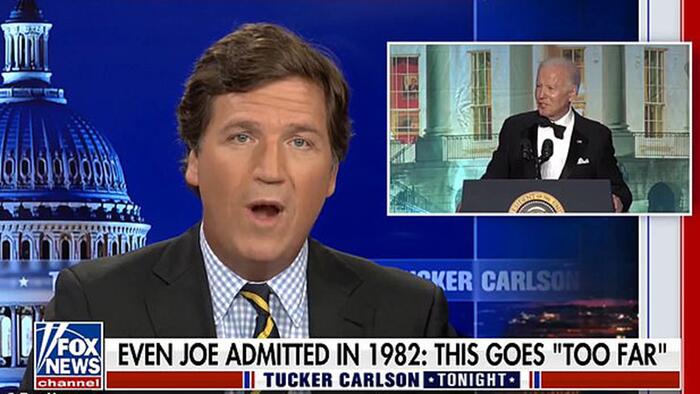 Fox News host Tucker Carlson noted Tuesday that Joe Biden voted against Roe vs Wade when he was a Senator, favouring making it a State issue, rather than a decision that should be made by the Supreme Court.

Carlson told viewers that “Joe Biden has always supported legal abortion, but nine years after the Roe decision was handed down, he was still willing to admit it was indefensible as a legal decision.”

“Pregnant women, Biden explained in 1982 as a member of the Senate Judiciary Committee, should not have “the sole right to say what should happen” to their unborn children, because, after all, no one creates children alone. It takes two people. That’s obvious.”

“In fact, Biden concluded Roe had gone ‘too far.’ And of course, it had gone too far. That was obvious then. It’s obvious now. Then, as now, many Americans believe that abortion is murder. Many other Americans consider abortion a prerequisite to happiness,” Carlson further noted.

During the monologue, Carlson called Roe vs Wade “the most embarrassing court decision handed down in the last century,” but noted that the leak of the draft opinion written by conservative Justice Samuel Alito was dangerous and that “people could get hurt”.

Carlson suggested that the leak was an intentional attempt to pressure conservative justices not to go through with overturning the ruling.

Recent polls have revealed that almost half of Americans believe that states should decide for themselves on the issue of abortion, with many of the opinion that terminations should be capped at 15 weeks.

In a Marist poll, 44% of people said it should be down to individual states to decide, while 48% said they would support the same law to apply after 15 weeks of pregnancy.

A Wall Street Journal poll also found 42% would support a ban on abortion after 6 weeks, while 48% supported a ban after 15 weeks.

A Gallup poll also found that 48% believe abortion should only be legal under certain circumstances.