Fresh comments from members of the U.S. Federal Reserve Open Market Committee have heightened the prospect of a faster path to higher U.S. interest rates and at the same time, sent European shares and U.S. futures on the , , and lower on Tuesday.

Russia’s newest military offensive in Ukraine is adding to the negative sentiment on equities.

Gold prices have slumped despite the .

After most underlying gauges declined slightly on Monday, all four US contracts began the day in the green, but have since all reversed lower.

In Europe, the travel and leisure sector slipped, sending the down. The sector faces two headwinds: ongoing worries about the coronavirus, as European destinations are considered high risk by the CDC, and spiking energy prices. Conversely, the energy sector was in positive territory, tracking strong gains in the price of oil.

Although prices slipped, the European benchmark has posted its longest winning streak since January 2018, rallying for five consecutive months.

The price blew out a bearish Descending Triangle, rendering the move bullish.

Earlier today, trading in Asia was mixed amid mounting concerns over a potential recession. Continuously rising inflation in the region is adding to the woes of the ongoing coronavirus pandemic.

Hong Kong’s tumbled 2.3% on concerns about a continued regulatory crackdown on the technology sector. On Friday, the Chinese Cyberspace Administration announced it is starting a two-month “clean-up” inspection of the live-streaming and short video sectors to crack down on illegal behaviors.

In addition, analysts have pointed out that the Chinese property sector is unlikely to return to the strong growth posted previously, in the aftermath of the government’s recent shakeup of the sector.

South Korea’s jumped nearly 1%, ending a two-day decline on a buying spree in chipmakers following a recent dip. Japan’s rose 0.7% as the extended its most prolonged fall in at least half a century, amid a widening gap between U.S. and Japanese interest rates. 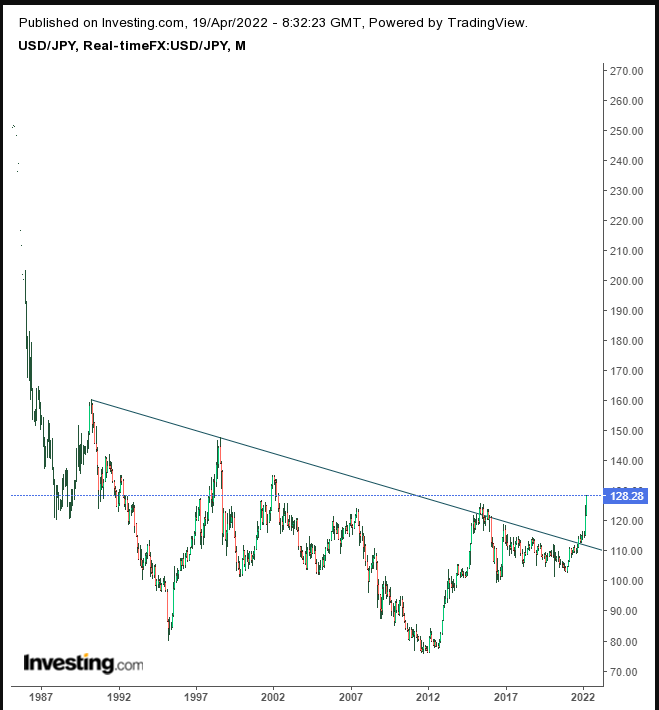 Having completed a bottom in 1987, the US dollar rally has strengthened against the yen. A weak yen boosts Japanese exports, which are essential to the country’s economic growth.

In China the slipped 0.76% as ongoing harsh pandemic restrictions continue there in an attempt to stamp out the recent surge in COVID cases.

U.S. stocks ended flat amid thin trading on Monday, though shares of Bank of America (NYSE:) surged 2.4% following its beat. 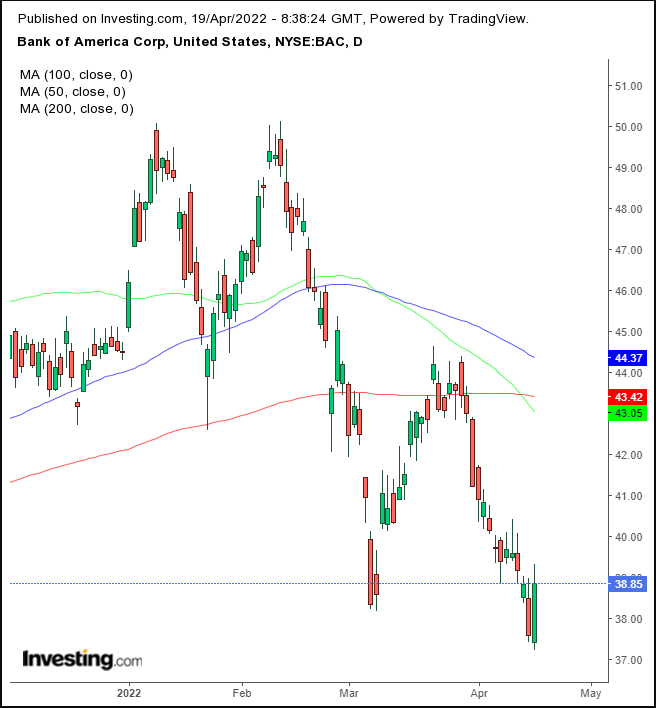 However, we’re bearish on the stock from a technical perspective after it posted another low, cementing a downtrend after the 50 DMA crossed below the 200 DMA, triggering a Death Cross.

Treasury yields on the note extended an advance to within a hair of 2.9% on ongoing global . 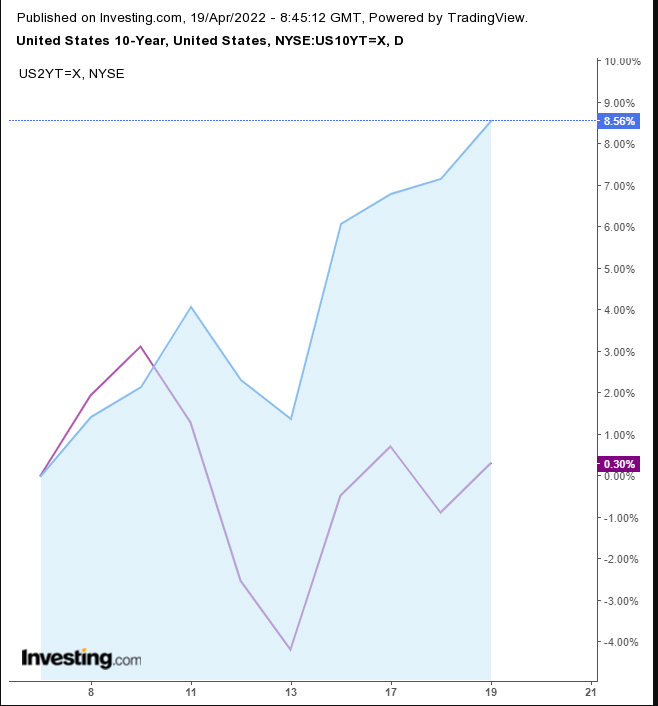 The rally eased a flattening yield . 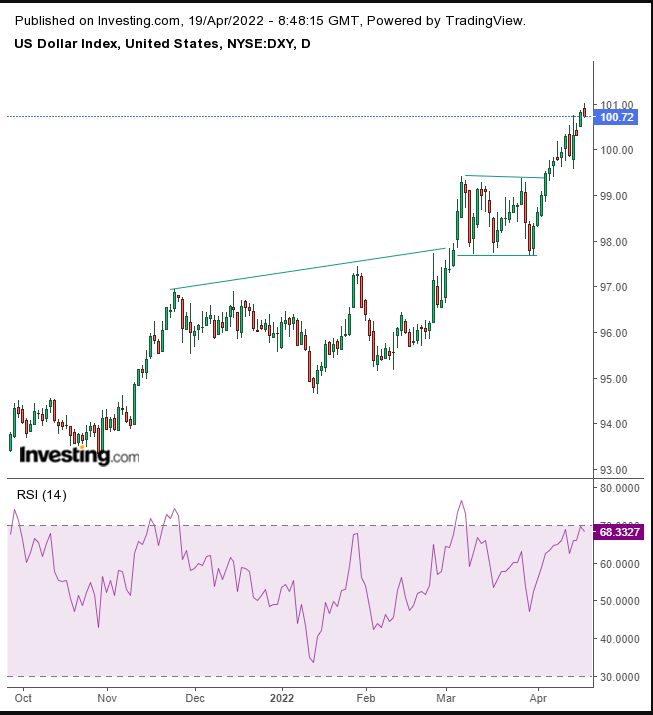 The greenback has been trading up and down in recent days as bulls struggled against a return move to the range that confirmed the H&S Continuation pattern. The RSI appears to have found resistance below the 70 levels.

pulled back despite the weaker dollar. 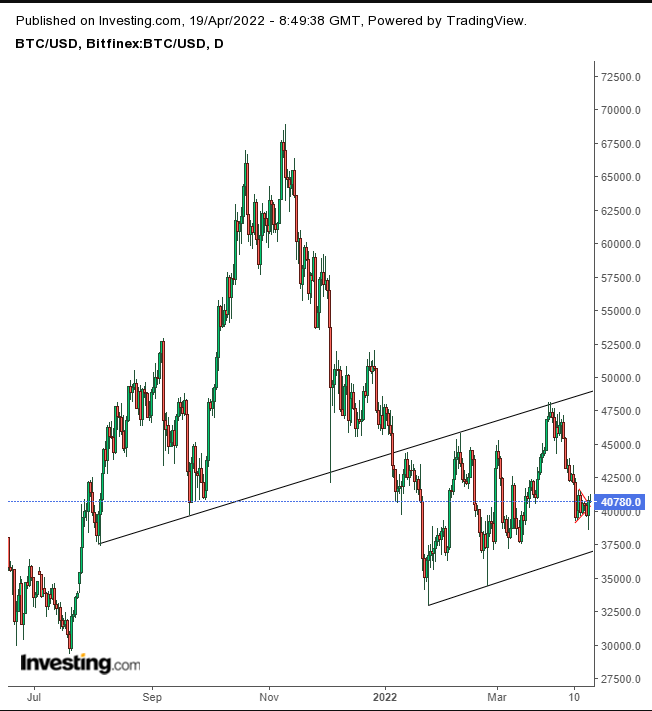 The cryptocurrency tested a bearish pennant within its rising channel that challenges an H&S top.