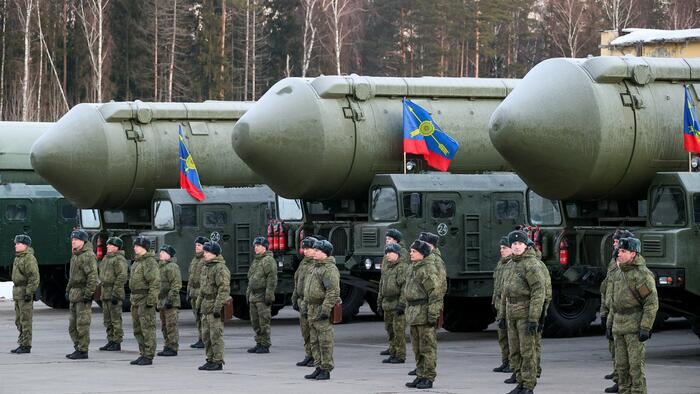 
Days ago CIA Director William Burns raised the specter of Russia using nuclear weapons in its war on Ukraine. He said in Thursday remarks at Georgia Tech that the US cannot “take lightly” a scenario of tactical nuclear deployment, particularly if the Kremlin should feel increasing desperation as its goals are being thwarted by Ukraine’s military resistance and heavier than expected losses.

“Given the potential desperation of [Russian] President [Vladimir] Putin and the Russian leadership, given the setbacks that they’ve faced so far militarily, none of us can take lightly the threat posed by a potential resort to tactical nuclear weapons or low-yield nuclear weapons,” Burns said at the time. He added that it would “change the world in a flash.”

Naturally the intelligence chief’s assessment set off a flurry of doomsday speculation and breathless media commentary suggesting Putin sees this as a real option, despite Burns in the same speech ultimately downplaying the idea.

“While we’ve seen some rhetorical posturing on the part of the Kremlin about moving to higher nuclear alert levels, so far we haven’t seen a lot of practical evidence of the kind of deployments or military dispositions that would reinforce that concern,” Burns said.

And of course, Ukraine’s President Volodymyr Zelensky seized on this, telling CNN’s Jake Tapper in a Sunday interview that “We shouldn’t wait for the moment when Russia decides to use nuclear weapons​.​ … We must prepare for that​.”

He went on to say in dramatic fashion that “anti-radiation medicine and air raid shelters would be needed” while underscoring that Russia “can use any weapon, I’m convinced of it​.​”

All of this has put pressure on the Kremlin to respond directly to the allegations, at a moment it ratchets up operations in the east to take the Donbas. On Tuesday Foreign Minister Sergei Lavrov was asked in an interview with India Today about the possibility of using nukes, to which he responded that Russia will only use conventional weapons in Ukraine.

According to Bloomberg, despite Lavrov obviously not being responsible for military decision-making, the comments remain “among the most categorical from a senior Russian official on the issue” which clearly deny the charge.

This theory is totally nuts, but it’s going mainstream. https://t.co/Gr5jWk6CKd

US mainstream publications, however, are still issuing headlines like the following: “Even if Russia Uses a Nuke, We Probably Won’t—but Putin Would Still Pay Dearly” – arguing for greater and greater sanctions and isolation imposed on Russia by the West. Such a strategy itself appears to be ratcheting tensions to the point there’s increasingly no diplomatic off-ramp between Russia and Ukraine’s NATO backers, who are still busy shipping weapons in the conflict.

Yet The Daily Beast admits that “Current and former U.S. officials say the U.S. and NATO have plenty of resources at their disposal without having to resort to the nuclear option,” assessing further that it remains very unlikely nukes would be used in Ukraine.