The Euro remains susceptible to geopolitics, most recently, the French elections and the latest Russian assault on the east of Ukraine. This last weekend saw French nationals cast their votes in the French election with polls ahead of the vote suggesting the gap between the favorite Macron and his nearest competitor La Pen, narrowing. In Justin McQueen’s election piece last week, he mentioned that French and German bond spreads widened ahead of round one of the election process but not to the same degree as in the 2017 elections when Macron held a more of an advantage.

This suggests the market has neglected to take into account a shock La Pen victory, a viewpoint that appears to be correct based on an interior ministry count that placed Macron on 27.6% of the vote with La Pen on 23.41% with 97% of the votes counted. The euro opened the week stronger on the back of the results and remains near opening levels.

In addition, Russia has refocused its assault on the east of Ukraine but has been met with strong resistance. The offensive seeks to take control of Mariupol as this would link up areas of Russian control to the west and east.

Will the ECB come to the Euro’s Rescue?

The ECB is set to meet on Thursday with market participants likely to focus on the press conference. The governing council will deliberate on the pace of winding down current asset purchase programme (APP) and timing around the Eurozone’s first rate hike since the pandemic – currently expected sometime in Q3.

With the euro as weak as it is, any perceived hawkish sentiment is likely to boost the euro but the technical and fundamental landscape is still strongly bearish. While the ECB debates the timing of a its first rate hike, other central banks debate whether their subsequent rate hikes will be 25 or 50 basis points. Interest rate differentials are likely to continue to weigh on the euro.

The Euro has received a boost from Macron’s round one victory and appears to be heading towards 1.0945, a level that has capped euro gains previously. EUR/USD volatility is likely to pick up ahead of the meeting and could rise on any perceived hawkishness. The psychological 1.1000 level poses the first challenge for euro bulls. In the interim, a hold at 1.0945 could see a lower move towards 1.0805.

The monthly chart below shows the major zone of support dating back to 1997/1998 which is a fair distance away. The zone has halted selling multiple times in the past. 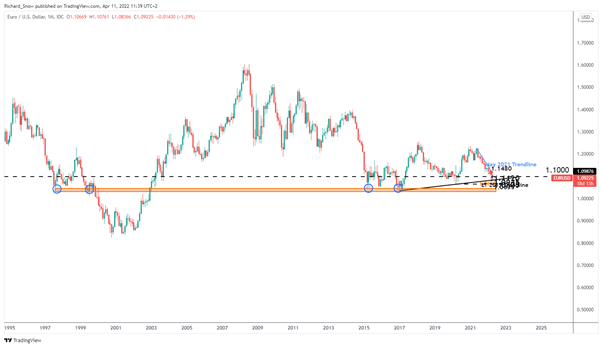