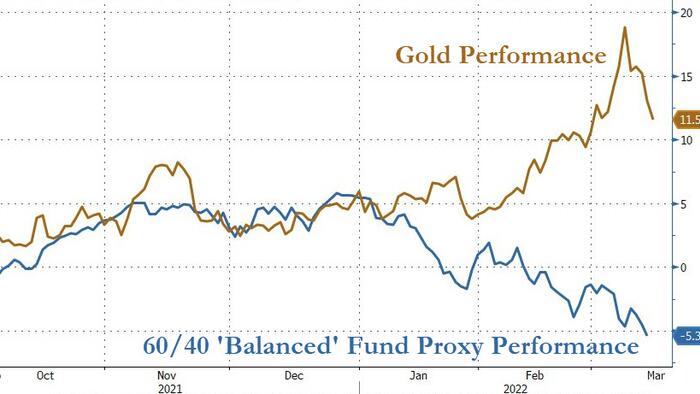 …and in fact, as Bloomberg reports, the classic 60/40 portfolio – a strategy named for the share allocated to equities and high-grade debt, respectively – is down more than 10% this year, leaving it on pace for the worst drubbing since the financial crisis of 2008.

In fact, for the first time on record, Bonds (TLT) and Stocks (SPY) are both down over 10% in Q1 together…

And on a 50-50 Bonds/Stocks basis, Q1 looks set to be the worst quarter on record…

Why? Why the sudden shift for a portfolio mix that is – by name – defined as ‘balancing’ risk, rather than aggregating it.

The answer is both simple and terrifying for the world’s central planners (and commission-takers) – Stagflation is back.

Unlike the last major crisis of faith in 60/40 books in 2008, though, the current environment is not driven by just a growth scare. Assets are being hammered by the double whammy of the risk that a stagnant economic expansion and fears of out-of-control ‘non-transitory’ inflation (a combination that could cause poor returns, or even losses, to extend for some time to come).

With rising stagflation risks, Goldman warns that investors face lower real returns and higher risks from 60/40 portfolios. There is pressure for higher equity allocations given the prospect of poor returns and less diversification potential from bonds. But while higher equity allocations increase the potential for attractive real returns in the long run, they increase the risk of large and fast drawdowns in the near term.

“You cannot count on the sort of investment returns seen over history for a period of time,” said Chris Brightman, chief investment officer at Research Affiliates.

“Bond yields, dividend and earnings yields are at a low starting point and it means future returns will be low when compared to history.”

During the the so-called “lost decade” of the 2000s, the “60/40 portfolio generated a meager 2.3% annual return and investors would have lost value on an inflation-adjusted basis,” Goldman Sachs Asset Management’s Nick Cunningham, the vice president of strategic advisory solutions, wrote in October.

“The very good returns of the past decade mean that is important for investors to establish more realistic return expectations,” said Izabella Goldenberg, U.S. head of portfolio strategy at Goldman Sachs Asset Management. She said that may involve seeking returns in global equities and “in principle being diversified for the long term.”

Andrew Patterson, senior economist at Vanguard Group Inc., said markets are verging on a period of low gains for the 60/40 portfolio.

He estimated that annual returns over the next 10 years will be “south of 5% and our estimates have been grinding down in recent years, mainly driven by equities.”

Equity and bond prices falling together may be a feature of the inflation shock. In past eras of supply-driven inflation, government bonds failed to offset equity losses, as prices in both markets moved together, said Jean Boivin, head of the BlackRock Investment Institute.

“Investors will have to live with higher inflation and that will challenge the role of government bonds in a portfolio,” he said.

“Central banks will find it harder to contain inflation and also harder to ease if economic growth slows materially.”

Markets have further repriced risk of stagflation, boosted by the commodities rally due to the Russia/Ukraine crisis – US 10-year breakeven inflation has reached the highest level since the 1990s, while real yields remain near all-time lows, resulting in a similar gap to that in the 1970s.

This points to little optimism on long-term real growth and material concerns on inflation risk.

For those looking for alternatives, Goldman suggests a combination of allocations to commodities, real estate, infrastructure, more international diversification as well as value, high dividend yield stocks and convertibles could help to reduce the risk of another 60/40 ‘lost decade’. Private markets might offer more opportunities to gain exposure to these themes.

During the 1970s stagflation there were material benefits from broader diversification…

PIMCO recently recommended shifting a portion of 60/40 portfolios into in commodities to hedge against elevated inflation.

“When inflation increases, asset values generally fall,” and “even a small allocation to commodities may materially improve the inflation protection of a traditional 60/40 stock/bond portfolio,” it said.

We already saw that Gold has outperformed dramatically as the stagflation fears rise.

And finally, Goldman has a lower conviction suggestion for those struggling with ‘balanced’ bond-stock portfolios… add some Bitcoin…

Our analysis suggests that just a small allocation to Bitcoin in a standard US 60/40 portfolio would have enhanced risk-adjusted returns materially since 2014 (while Bitcoin prices are available from mid-2010, we use prices since 2014 as Bitcoin was not easily accessible to investors before then), even as balanced portfolios performed strongly on their own. The strong risk-adjusted performance of Bitcoin was due to strong returns rather than to low risk.

But Goldman warns that Bitcoin’s history is too short to cover several business cycles or a period of high inflationary pressures, so it is unclear how Bitcoin would behave during a period of stagflation. Additionally, Bictoin’s high relative volatility can quickly come to dominate the diversified book’s performance.

Given its limited and known supply, the price of Bitcoin should primarily depend on investor demand and its perceived value. But investor demand so far seems to be linked to the asset itself rather than macro factors; adoption by retail investors – and recently some institutions – has boosted prices while regulatory and tax concerns, as well as positioning, have driven sharp setbacks. Without more clarity on these idiosyncratic drivers, assessing Bitcoin’s future risk/reward and role in balanced portfolios remains difficult.

Since the GFC, many of these alternative strategies have had mixed success due to low and anchored inflation, but Goldman believes that in the Post-Pandemic Cycle they are likely to enhance risk-adjusted returns for a balanced portfolio.