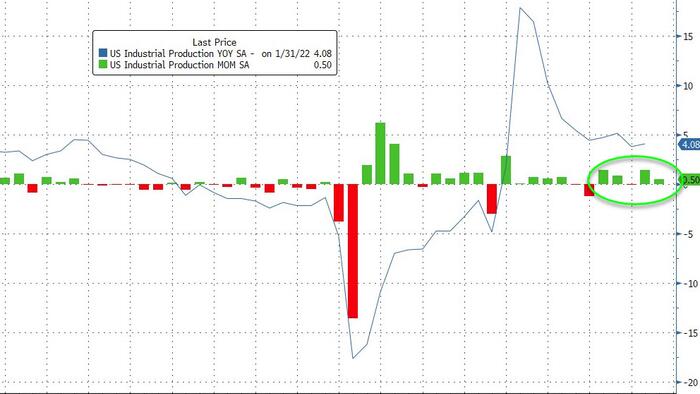 Total industrial production in February was 7.5 percent higher than its year-earlier level, but severe winter weather in February 2021 significantly suppressed industrial activity that month. A more useful comparison shows that the index has advanced a still-strong 4.2 percent since January 2021

The decrease of 2.7 percent in the output of utilities in February reflected a return to more seasonable weather following a colder-than-average January.

President Biden will not be happy!

On the optimistic side, manufacturing production rose 1.2% MoM, better than the +1.0% expected…

The indexes for durable and nondurable manufacturing moved up 1.3 percent and 1.1 percent, respectively, while the output of other manufacturing (publishing and logging) moved down 0.4 percent. Most major durable and nondurable goods industry groups posted gains. An exception was the output of motor vehicles and parts, which declined 3.5 percent and continued to be restrained by a shortage of electronic components. In February, the indexes for most industry groups were higher than in the beginning of 2021; notable exceptions were the indexes for motor vehicles and parts and for other manufacturing (publishing and logging).

However, Capacity Utilization disappointed expectations with a 77.6% print versus 77.9% exp (but that was up from a revised-lower January print of 77.3%).