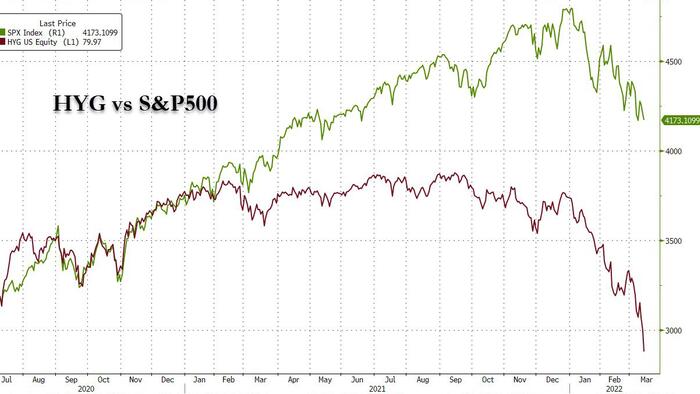 
Last Friday we reported that credit is “cracking”, quoting from the ominous words of BofA strategist Michael Hartnett who chose to describe the bond markets currently, and as we noted, “it is a very ugly picture indeed – for both price… and flows.”

Since then, credit has only gone from bad to worse, and amid Monday’s rout, junk bonds (HYG) finally took out the psychological level of 80, a level last hit during the depths of the covid crash (just before the Fed stepped in and started buying bonds).

But while the collapse in junk is ominous, the first real casualties in credit took place in Europe, where we just observed the first CLO defaults this year, which as Bloomberg’s Tatiana Darie says, echoing out earlier observations, are “adding to signs of stress in junk-rated credit markets, which remain frozen, and could further spook investors already concerned about the worsening economic outlook.”

What happened? Three issuers across CLO portfolios were classified as defaulted in 2022 so far, according to Deutsche Bank. That compares to a total of six for the entire year in 2021, and 39 in 2020, the bank’s data show.

To be sure, while the overall exposure to the CLO asset class is small, at less than 0.03%, and one of the three issuers is based in the U.S., but half way through last year’s count in less than three months, and before any real impact from Ukraine’s war is seen, it undermines the bullish case for CLOs – which are critical to support demand for the leveraged loan market – underpinned by ultra-low defaults and benign forecasts going forward. And yes, it may come as a shock to some but rates in the US are still at zero.

The defaults also come at a time when leveraged credit is reeling from a plunge in prices, wider spreads and massive outflows from high-yield funds. Primary markets in Europe continue to be shut, with no junk-rated deal in public syndication for about a month now (some loans, like IVC’s EU480m offering, are getting done privately).

While the broader CLO market has also seen some signs of life – Napier Park Global Capital pricing a deal last week – but coupons for the top-rated and largest part came in at the highest since November and the transaction offered some sweeteners such as shorter non-call and reinvestment periods, according to Darie, a structure used at the start of the pandemic to lure investors and allow managers to refinance quickly when markets recovered.

Meanwhile, if the market volatility persists and credit continues to take it on the chin, expect many more CLO defaults, which incidentally may be just what bulls need. After all, while the Fed may ignore the crash in stocks, it will have no choice but to intervene once credit, which underpins Biden’s entire fake economy, dives next.