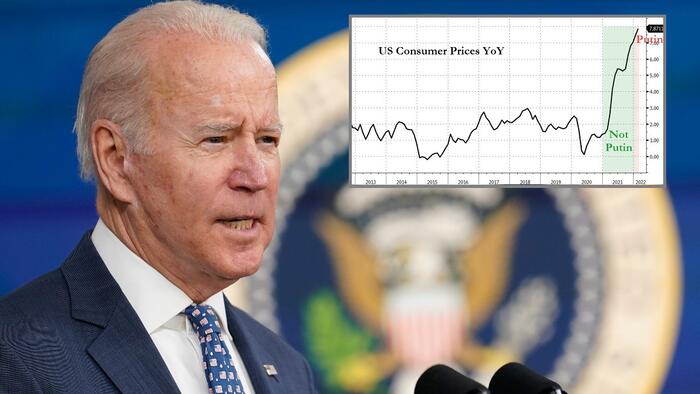 
Friday morning, the Wall Street Journal reported that Democrats have ‘lost ground’ over key issues – primarily inflation and the economy, which 50% cited as a top issue.

A majority of voters, 63%, said they disapproved of Mr. Biden’s handling of rising costs, the president’s worst rating on six policy issues surveyed in the poll. Meanwhile, 47% of voters said Republicans were better able to handle inflation, compared with 30% who preferred Democrats. –WSJ

The devastating poll comes as the White House has spent the better part of the last week rebranding inflation as the “Putin price hike“:

And so, just hours later while speaking with House Democrats at their member retreat in Philadelphia, Biden laid out his case on Friday for why inflation isn’t his fault. Instead, Russian President Vladimir Putin, big oil, and the pandemic are the culprits.

“Here are the facts. Democrats didn’t cause this problem, Vladimir Putin did,” Biden said.

Biden also blamed oil companies and their executives because they “don’t want to pump more oil, although they have every capacity to do so. Nothing is slowing them up,” he said in response to criticism that his administration’s canceling of the KeystoneXL pipeline and Executive Order stopping new oilfield leases is to blame. The administration has repeatedly said that the industry has 9,000 approved leases they can tap into at any time.

Joe Biden is furious that Americans blame inflation on his government spending. pic.twitter.com/quRxB2lfvA

BIDEN: “The oil companies and the executives, they don’t want to pump more oil, although they have every capacity to do so. Nothing is slowing them up.” pic.twitter.com/JKccKB6a4G

Let’s review the Biden administration’s explanations for inflation over the course of the last year:

On Thursday, Fox News‘ Peter Doocy asked White House spox Jen Psaki “Are you guys going to just start blaming Putin for everything until the midterms?”

To which Psaki responded: “Well, we’ve seen the price of gas go up at least $.75 since…Putin lined up troops[.]”

Doocy 🔥🔥: “inflation goes up today. The President’s statement blames the #PutinPriceHike. Are you guys going to just start blaming Putin for everything until the midterms?”

Except… if all of this is the fault of Putin and big oil, how does the Biden administration explain this? Couldn’t have been Democratic admin responses to the pandemic – right?