Among the closely watched mega cap FAANG stocks, Netflix (NASDAQ:) has been the hardest-hit year-to-date. The streaming giant’s market fortunes began reversing soon after shares hit a record high of almost $692 in the middle of November, after it became clear that the explosive, pandemic-era subscriber growth the Los Gatos, California company was enjoying wouldn’t be sustainable.

The entertainment behemoth closed Tuesday at $341.76 a share, down 51% from its peak.

The pivotal trigger for Netflix’s selloff came after its last when shares of the company plunged 20% in one day after it released a worse-than-expected growth forecast. The investor mass exodus from growth-oriented tech names as rising interest rates weighed on stocks also played a part in this rout, sustaining NFLX’s bearish spell for the period that followed.

Still, this drastic plunge raises a question for long-term investors: is the stock now oversold?

The latest guidance from the company showed that near-term growth is unlikely, as the macro environment becomes more challenging and competition intensifies. In its letter to shareholders, released after its Q4 and full-year 2021 results, Netflix said its subscriber growth rates have “not yet reaccelerated to pre-COVID levels.”

Among the reasons for that is an “ongoing COVID overhang” and economic difficulties in several parts of the world, including Latin America, where devaluating currencies have made subscription prices comparatively higher.

Adding to the difficulty of subscriber growth momentum, consumers have more choices now from some of the world’s top entertainment content providers.

Walt Disney Company (NYSE:), Netflix’s most formidable competitor, announced last week that it would offer a lower-priced version of Disney+ with advertising later this year. The new service will begin in the US in late 2022 and expand internationally next year. The company plans to release details about price and timing at a later date.

The post-pandemic weakness and intensifying competition are the two major factors that have divided analysts on Netflix in recent weeks. In an Investing.com poll of 43 analysts, 20 either have a sell or neutral rating on the stock. 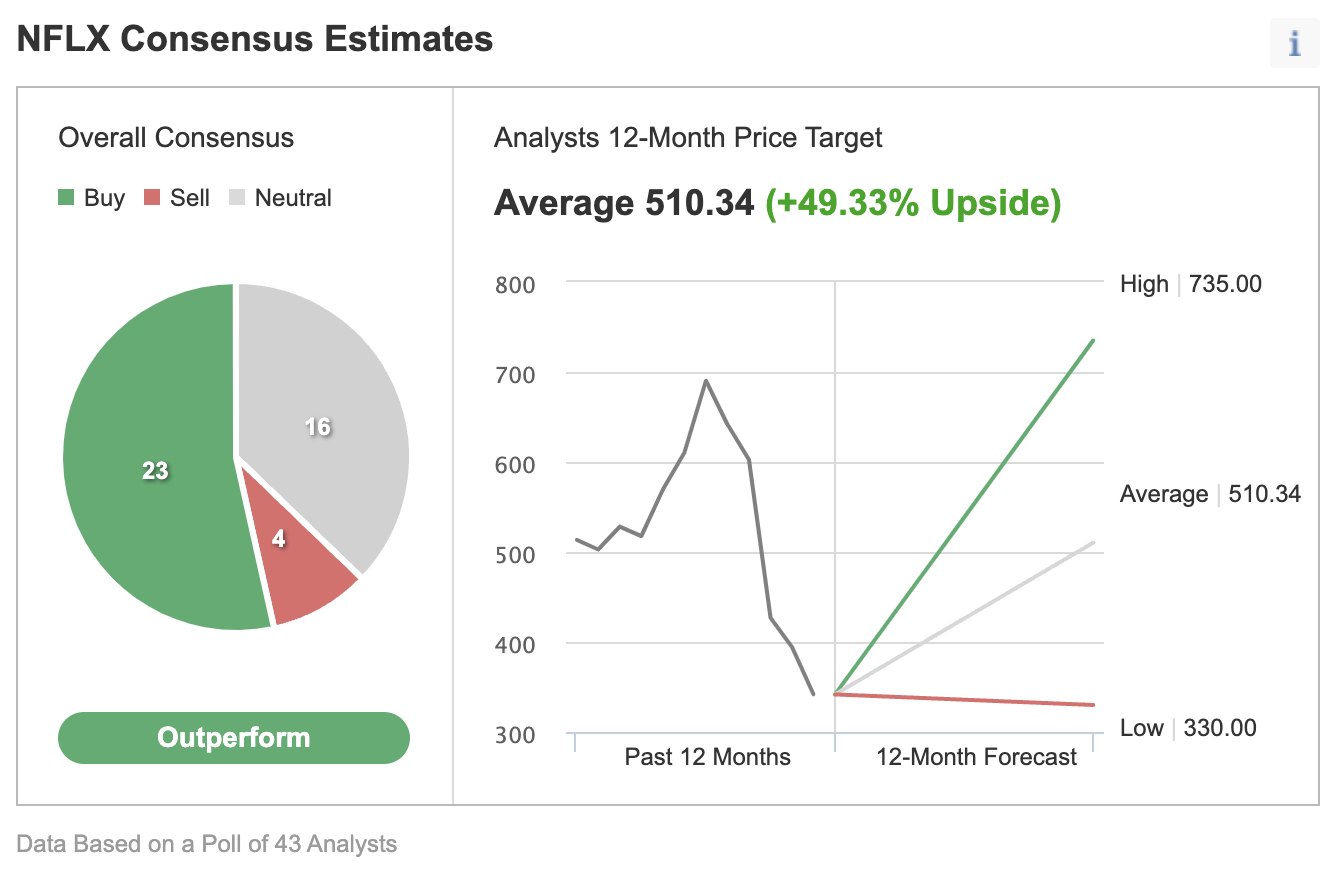 Still, the 12-month consensus opinion provides a 49.33% upside target for NFLX shares over the next 12 months.

Nevertheless, intensifying competition is becoming a “bigger problem now” for Netflix, Macquarie analyst Tim Nollen said in a Bloomberg report, downgrading the stock to a sell-equivalent rating. He said that the subscriber outlook is disappointing and contributes to an uncertain outlook.

Notwithstanding, many analysts are optimistic and see value in Netflix’s beaten-down stock. In a note this week, Wells Fargo kept its overweight rating, saying investors need to be patient with the company’s subscriber additions. Its note added:

“The challenge on NFLX is anchoring net add expectations. This deep dive into global connectivity and subscriber penetration suggests long-term net adds more likely 20 million or better than 15 million or worse. If correct, the shares are floored based on the current EV/Submultiple, and EPS estimates will trend higher.”

Stifel, in a note last week, also reiterated its buy rating on the streaming giant and said it sees an attractive risk/reward. Its note said:

Netflix may have more downside in the current market environment where many risks continue to hover. But after this massive selloff, the stock is no longer overpriced. Rather, shares now reflect the downside discussed above. In our view, current levels of NFLX offer a good buying opportunity for long-term investors.