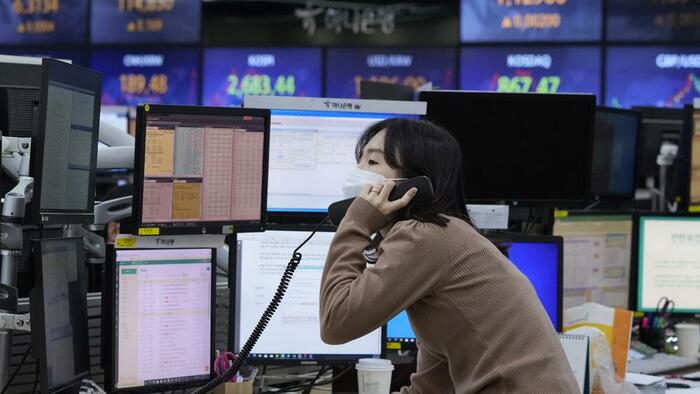 
Global stocks and US futures tumbled on Monday, although they were well off their worst levels as a fresh round of ceasefire talks kicked off on Monday morning offering a glimmer of hope that hostilities will end; sovereign bonds rallied and commodities surged amid heightened uncertainty after a new wave of sanctions against Russia for the invasion of Ukraine.

March contracts on the S&P 500 Index declined as much as 2.9% before trimming losses to 1%, or down 43 points as of 745 a.m. in New York. Futures on the Nasdaq 100 and the Dow were each down 1.4%. European stocks also recovered from an earlier as banks with exposure to Russia led declines, while utilities and defense stocks gained. Oil, natural gas, wheat and palladium jumped, as Brent crude soared to about $103 a barrel on fears of commodity-supply disruptions. Rallies in the dollar, gold and Treasuries underlined the demand for havens.

Over the weekend, Western nations agreed on new sanctions to further isolate Russia, by seeking to prevent its central bank from using foreign reserves to blunt sanctions and excluding some Russian lenders from the SWIFT messaging system that underpins trillions of dollars worth of transactions. Below is a summary of the biggest Russian updates over the past 24 hours:

“The news flow on the conflict will dominate short-term market fluctuations,” said Patrick Moonen, principal strategist of multi-asset at NN Investment Partners. “We expect a period of high volatility and higher equity risk premia. Commodity prices are the main transmission channel and the risk of supply disruptions will keep these high. This can lead to sustained high inflation numbers and can weigh on the growth outlook.”

Bank stocks tumbled in premarket trading Monday as the U.S. 10-year Treasury yield falls to its lowest level in nearly a month amid a broader move away from risk assets, after Western nations increased sanctions on Russia. All of the biggest U.S. bank stocks are lower this morning with Morgan Stanley sliding 2.7%, JPMorgan dropping 2.4%, Citigroup slipping 2.4%, Bank of America dropping 2.3%, Goldman Sachs falling 2.2% and Wells Fargo losing 2%.

“With the recent increase in geopolitical risk, we believe market levels could remain under pressure and capital markets activity may remain volatile, which could negatively impact the near-term revenue outlook for Universal banks including Trust banks,” KBW analysts including Chris McGratty and David Konrad wrote in a note.

“KBW remains constructive on U.S. financials, but the yield curve and credit spreads represent potential negative risk factors that could be amplified if geopolitical tensions accelerate and are worse than the market anticipates,” they added.

Shares of cybersecurity software companies could advance as the removal of some Russia banks from the SWIFT financial messaging system, along with sanctions on Russia’s central bank, will likely result in a significant ramp-up of cyber warfare targeting U.S. and Europe enterprises and government agencies, analysts say.

Europe’s Stoxx 600 is down 0.9%, paring a much bigger earlier loss and still much higher than last week’s lows, with banks, autos and insurance the worst performing sectors. BP Plc shares dropped after its decision to offload its stake in Russia’s Rosneft. Even though stock futures are well off their overnight lows, the early-morning risk-off mood in European markets is clear: Russia is and will be the focus of investor attention. As Bloomberg notes, German yields are sharply lower at the front end, in line with Treasuries, despite the region’s inflation woes being emphasized by consumer prices in Spain rising faster than forecast in February. Italian stocks are lagging, while the FTSE 100 is outperforming, helped by defense stock BAE. S&P 500 futures are down but near session highs.

In rates, Treasuries remained richer across the curve, although futures are off best levels of the day, after opening gap higher following weekend announcements of new sanctions against Russia for the invasion of Ukraine. Yields lower by 3bp to 7bp across the curve led by front-end, steepening 2s10s spread by more than 2bp, 5s30s more than 3bp on the day; 10-year ~1.92% after dropping as low as 1.885% in early Asia session. Funding stress remains priced into front-end with March eurodollars lower and front-month FRA/OIS wider. The first-month FRA/OIS remains wider by 5.5bp on the day at ~19bp after opening as high as 21bp; the Mar22/Jun22 eurodollar futures spread is flatter by 7bp.

Meanwhile, the flight-to-quality across the front-end has further eroded rate-hike premium in overnight swaps; around 28bp remains priced into the March FOMC meeting (vs 31bp Friday), 145bp into December (vs 155bp prior). Odds of a 50bps rate hike are around 15%, after dropping as low as 9% overnight.  German yields are sharply lower at the front end, in line with Treasuries, despite the region’s inflation woes being emphasized by consumer prices in Spain rising faster than forecast in February.

In FX, the dollar has rallied in haven demand. The Bloomberg Dollar Spot Index jumped as much as 0.7% and the greenback rose against all its Group-of-10 peers apart from the Swiss franc and yen, while Treasuries gained after Western nations agreed to penalize Russia’s central bank and exclude some of the country’s banks from the SWIFT messaging system. The trading session calmed down slightly after an initial shock by the scale of sanctions on Russia that aim to cripple the country’s financial system and its central bank.

The ruble has somewhat calmed down, with the onshore trading at 99 per dollar after the Bank of Russia raised its key interest rate to the highest in almost two decades and imposed some controls on the flow of capital. The ruble lost a third of its value in offshore markets at one point on Monday, plunging as low as 109 as the cost of insuring the government debt signaled a 56% probability of default.

The euro slipped below $1.12 falling on worries about risks for Europe’s economy, which relies on Russian energy.  Euro hedging costs remain underpriced on a relative basis even as they extend their recent advance after Western nations escalate sanctions on Russia. cost of converting euro payments into dollars using three-month cross-currency basis swaps soars at the European open as demand for the greenback surged. Sweden’s krona was the worst G-10 performer, dropping by as much as 2.5% against the dollar before paring. Japan’s bond volatility surged to a one-year high as worsening tensions over Ukraine drove up oil prices and boosted inflationary pressures. The yen was steady versus the dollar.

A more detailed look at global markets courtesy of Newsquawk

Asia-Pac stocks traded cautiously after Russian President Putin ordered nuclear forces to be placed on high alert and with the west imposing further sanctions such as excluding some Russian banks from SWIFT and restrictions targeting CBR’s international reserves. ASX 200 shrugged off early weakness, helped by the commodity-related sectors and stronger than expected Retail Sales.
Nikkei 225 swung between gains and losses with pressure from the haven flows into JPY. Hang Seng and Shanghai Comp. traded mixed with Hong Kong dragged lower by large tech and virus concerns with a lockdown for the city said to not be ruled out during mass COVID testing, while losses in the mainland were limited after the PBoC continued its firm liquidity effort and China’s Politburo reiterated to step-up implementation of macro policies to stabilise the economy

European bourses are pressured amid geopolticial tensions and SWIFT sanctions, Euro Stoxx 50 -3.0%; albeit, bourses are off worst levels as negotiations commence. Sectors has Banks as the laggard given SWIFT restrictions while Energy has been torn between benchmark pricing and BP exiting Rosneft. US futures are, in-fitting with European comparables, subdued but off worst levels, ES -1.4%.

In commodities, WTI and Brent are bolstered amid the geopoltical tensions, though off best levels as negotiations commenced and Brent May’22 fails to hold onto USD 100/bbl. OPEC+ revised its 2022 oil market surplus forecast down to 1.1mln bpd from 1.3mln bpd and it missed oil output targets by 972k bpd in Jan vs. 824k bpd in December, according to the JTC. BP (BP/ LN) is to exit its 20% shareholding in Russian oil major Rosneft and will write down as much as USD 25bln at the end of Q1 as a result of its Rosneft exit. North Sea Troll crude oil stream is to load 6 cargoes in April vs. 7 planned in March, according to Reuters sources. UK Ministers are said to be preparing to release over 1mln barrels of the UK’s strategic oil reserve to tackle rising fuel prices, according to The Times. Spot gold is bid alongside haven-FX, regaining the USD 1900/oz mark though remains capped by overnight highs at 1931/oz. China state planner will step up supervision of iron spot and futures markets to ensure stable market operation, while it will hold a meeting with the market regulator and the Dalian exchange to look into irregular trading in iron ore spot and futures markets. Traders warned they are unlikely to make wheat offers from the Black Sea region at Monday’s Egyptian buying tender, according to Bloomberg.