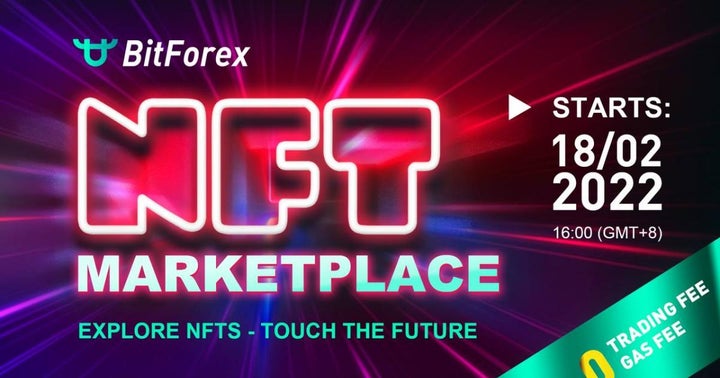 BitForex announced the launch of its NFT Marketplace on February 18, 2022. The marketplace aims to simplify the process of buying, selling, and collecting NFTs for every user.

The company claims that the usage of its NFT Marketplace will be easy, intuitive, and safe for savvy investors as well as newbies in the world of NFTs and Crypto.

BitForex’s NFT Marketplace attempts to solve the existing issues on the NFT and Crypto markets. Some of them include:

As NFTs can be created by anybody, it becomes harder and harder to track the quality of one and know the difference between good and bad, which makes it difficult to find quality NFT projects.

Investors find it increasingly difficult to find enough NFTs released by NFT projects. However, if investors visit the project-host NFT Marketplace, they could buy NFTs issued by the project.

The more popular NFTs are, the more expensive they become. BitForex NFT Marketplace claims to know how to help investors who are seeking a profitable and premium NFT before their price increase.

Connecting the wallet to operate is an essential step in most NFT marketplaces. BitForex NFT Marketplace claims to have features that help you avoid a potential security threat when connecting to your personal wallet.

The Efficiency of BitForex NFT Marketplace

BitForex NFT Marketplace aims to differentiate itself from competitors by offering the following:

The company says that has no record of security issues since its inception in 2017 as it does its best to eliminate the worries related to the safety of users’ assets.

BitForex is proud of its cooperation with hundreds of talented artists, creative and quality projects all over the world.

BitForex NFT Marketplace is incredibly easy to use. The trading process for buyers and sellers can start in the blink of an eye. BitForex supports all NFTs based on almost all public chains like BSC, Ethereum, Klaytn, etc. BitForex supports fixed price, live auction, and buyout sales types.

BitForex doesn’t charge any commissions or trading fees on the NFT Marketplace while the early promotion period. Buyers and sellers shouldn’t be afraid of the high gas fees.

BitForex offers a large selection of tradeable goods, such as spot trades, margin trades, and derivatives. New services and products are continually being introduced by BitForex in response to customer feedback.

Having over 163 cryptocurrencies and over 300 trade pairs available in more than 180 countries, BitForex suggests the new level in crypto trading.

To find, buy, and sell your NFTs on the BitForex Marketplace, visit its website here.

This content should not be interpreted as investment advice. Cryptocurrency is a volatile market; do your independent research and only invest what you can afford to lose. New token launches and small market capitalization coins are inherently more risky than large cap cryptocurrencies. These tokens are subject to larger liquidity and market risks.