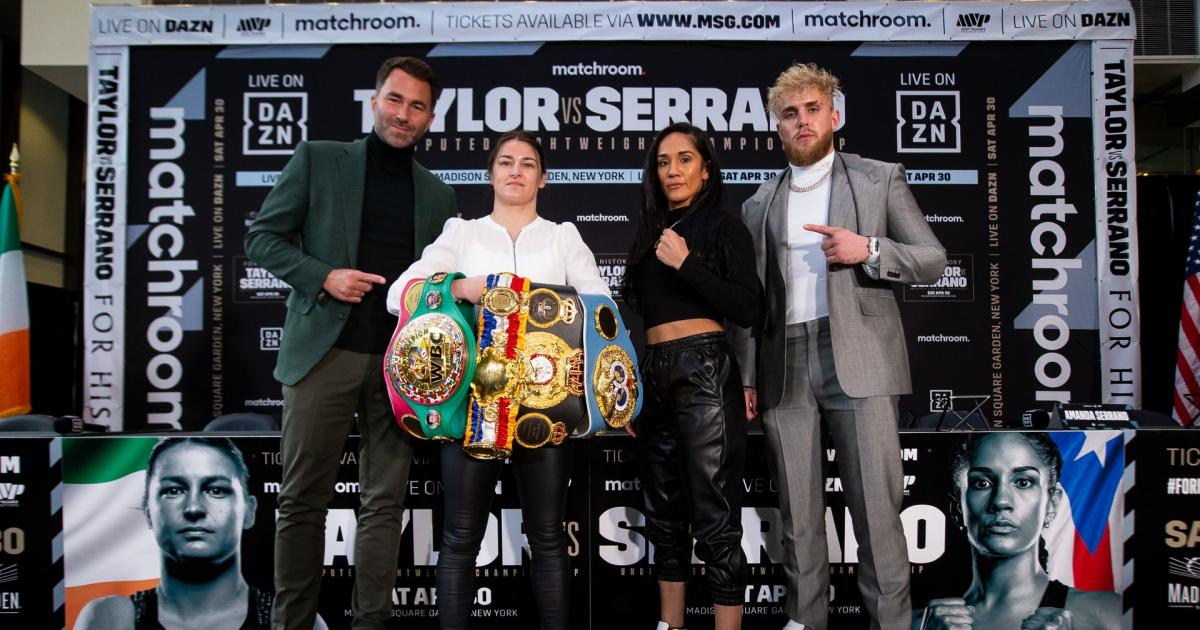 It was all business inside Madison Square Garden on Wednesday when Katie Taylor and Amanda Serrano started the press tour for their upcoming fight inside the arena. Their April 30 bout will be the first female main event in MSG history. Both fighters have been preparing for this moment for a long time.

Taylor, the WBA, IBC, IBF, WBO and The Ring lightweight champion, has put on great matches over the years against fighters like Natasha Jonas and Rose Volante. She put together two classic performances against Delfine Persoon, someone she wanted to face for a while. The other big match she wanted was Serrano.

“Ever since I turned pro, I had my eyes fixed on two fights: one was Persoon, and the other one was Amanda Serrano. So this is a fight I’ve been looking forward to for quite some time,” Taylor said during the press conference. “It’s incredible to see how far women’s boxing has gone in just five short years. . . . This is history. All of our hard work has finally paid off.”

MORE: Why Crews-Dezurn vs. Cederroos title fight was added to Taylor-Serrano card

Taylor, a 2012 Olympic gold medalist, defeated Serrano’s sister Cindy in 2018, which will give Amanda Serrano more incentive to beat her. Taylor was supposed to face Serrano in 2020, but things did not work out, either over pay or the COVID-19 pandemic.

A seven-division champion, Serrano had gold all over a table at the press conference. She is hoping to add more against Taylor. On Women and Girls in Sports Day, she delivered a slight dig at Taylor for comments she made about previous opponents.

Up close and personal. That is A LOT of gold. Amanda Serrano⁩ is looking to add more. #TaylorSerrano #Boxing

“I don’t need to talk bad about my opponents. I do all the talking inside the ring,” Serrano said. ” I respect Katie Taylor and what she’s done. We’re changing the sport. I am excited to be opening doors. We have to prove who’s the pound-for-pound best, because everyone has been asking for it.”

Serrano is on a 28-fight win streak since suffering the only loss of her career in 2012. Her last fight was in December, a unanimous decision win over Miriam Gutierrez, whom Taylor beat in November 2020. She recently signed with Jake Paul and Most Valuable Promotions, which has provided her with a platform that helped secure a fight of this magnitude. Taylor is represented by Eddie Hearn of Matchroom Boxing.

According to Paul, and as confirmed by Hearn, both fighters will be making seven figures for this fight, something that was once considered unprecedented. Paul made sure to point out that this fight is for the fighters of the past as well as the current crop of fighters.

MORE: Jake Paul reveals how much Katie Taylor and Amanda Serrano will make for ‘historic’ superfight

“It’s also about Ann Wolf, Christy Martin, Laila Ali, Mia St. John, and so many other legendary boxers that helped lay the foundations for the ladies to be sitting here today. It’s about Claressa Shields, Mikaela Mayer, Alycia Baumgardner and other amazing professionals currently in the sport,” Paul said. “Most of all, it’s about the future young women and girls all around the world who will see April 30 as a moment that made the impossible, possible, equality as it’s meant to be.”

The two will now head to London for one last press conference before fight week. Also on the card will be a super middleweight unification fight between Franchon Crews-Dezurn and Elin Cederroos, as well as a bout between Liam Smith and Jessie Vargas.