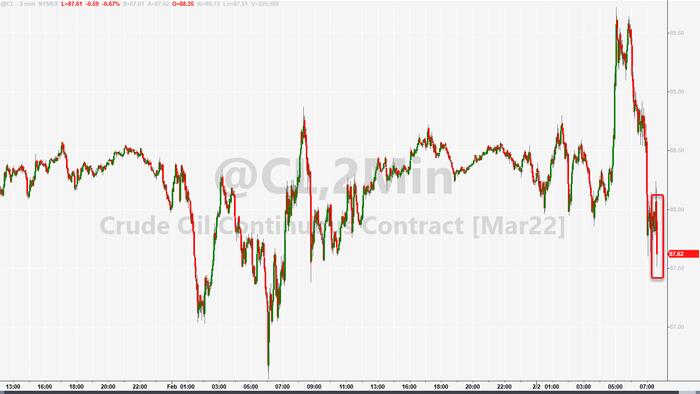 
Oil prices have had a wild ride overnight and are now trading back below levels when the API inventory data hit last night (showing a surprise crude draw and another big gasoline build). The OPEC+ meeting appeared to go without any controversy, agreeing to the 40K b/d production hike as planned, which sent oil prices spiking notably (WTI almost $90)…

“That is what was expected, despite some rumors yesterday that OPEC+ might agree on a larger hike” said Carsten Fritsch an analyst at Commerzbank AG.

“They keep their powder dry for the time being.”

…but that has all been reversed now with some desks claiming Iran headlines (U.S. should ease its sanctions on Iran in order to help tightly supplied markets and ease prices, Iran’s Oil Minister Javad Owji says in comments to the state-run Shana news agency) may have been a driver of the reversal.

More likely is a lack of liquidity as all markets are fading at the same time.

Implied U.S. gasoline demand slipped week-on-week but rose for the first time since late December on a four-week rolling basis. Gasoline inventories continued to build, mostly in the east coast, offsetting a dip in the U.S. Gulf Coast.

US crude production continues to hover at 2 month lows…

WTI rallied up near $90 this morning before falling back. It was hovering around $88 ahead of the official inventory data and extended losses after…

“Of course the question is whether this would require a White House call.”

Crude remains in backwardation, a bullish pattern marked by near-term prices commanding a premium over those further out.