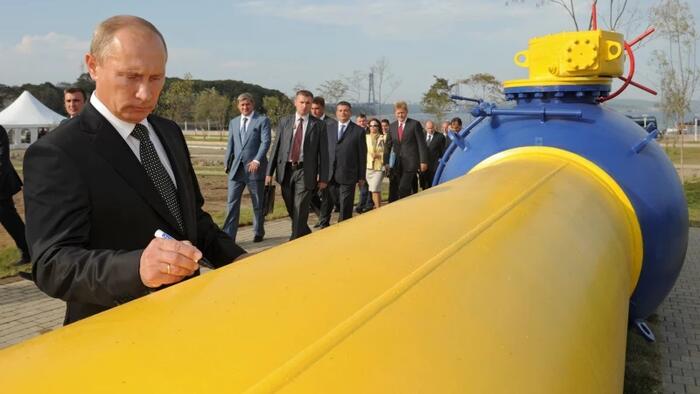 
While the situation along the Ukrainian border appears to be deescalating – aside from US/UK’s panic coalition, a top Russian official says that if the West follows through on a threat to cut the Kremlin off from the SWIFT payment system, Europe won’t receive Russian oil, gas, or metals.

On Tuesday, British Prime Minister Boris Johnson said he was in discussions to ban Russia from the Swift global payments system with the United States, calling it a “very potent weapon.”

“I’m afraid it can only really be deployed with the assistance of the United States though. We are in discussions about that,” he added.

Nikolay Zhuravlev, Vice Speaker of the Federation Council, responded to Johnson’s threat – telling Russia’s state-owned TASS that Europe would suffer the consequences of such a move.

“SWIFT is a settlement system, it is a service. Therefore, if Russia is disconnected from SWIFT, then we will not receive [foreign] currency, but buyers, European countries in the first place, will not receive our goods – oil, gas, metals and other important components of their imports. Do they need it? I am not sure,” said Zhuravlev – who noted that while SWIFT is convenient and fast – it’s not the only game in town when it comes to financial transactions.

“SWIFT is a European company, an association which involves a lot of countries. To make a decision on disconnection, a single decision of all participating countries is required. The decisions of the United States and the UK are definitely not enough. I’m not sure that other countries, especially those in which the share of trade with Russia is significant will support the shutdown,” he continued.

In recent years, Brussels regularly raises the topic of disconnecting Russia from SWIFT amid aggravation of relations between Moscow and the West. For the first time, the European Parliament called on disconnecting the Russian Federation from the interbank payment system in 2014 in a resolution adopted after the reunification of Crimea with Russia. -TASS

The United States, meanwhile, is in talks with major energy-producing countries and companies worldwide to line up a backup plan to provide Europe with energy if Russia invades Ukraine, according to Reuters, citing senior Biden administration officials.

“We’ve been working to identify additional volumes of non- Russian natural gas from various areas of the world; from North Africa and the Middle East to Asia and the United States,” said a senior administration official on condition of anonymity, adding “Correspondingly, we’re … in discussions with major natural gas producers around the globe to understand their capacity and willingness to temporarily surge natural gas output and to allocate these volumes to European buyers.”

The White House’s plan is complicated by the fact that the world’s LNG producers are already churning out as much as they possibly can. Reuters reported that the companies contacted told the U.S. government officials that global gas supplies are tight and that there is little available to substitute large volumes from Russia. -Reuters

That said, the situation in Ukraine appears to be deescalating as we noted on Tuesday, following a number of rapid developments which have seen lead NATO countries break from the more bellicose and threatening tone of the United States and UK.

To wit, after Germany’s neutrality toward the Russia-Ukraine crisis became apparent, Sweden became the latest to follow its lead of forbidding arms transfers to Kiev, while Croatia is out with a firm statement saying it will recall all of its troops from NATO in the event of war.

Ukraine’s NSC Sec. Danilov tells @BBC_ua he doesn’t expect an imminent invasion and doesn’t share “the panic,” which he connects to “geopolitical and domestic” processes in the West:

“The buildup of Russian troops [at the Ukrainian border] isn’t as rapid as some claim” https://t.co/hudVerkfvl

This followed on the heels of Ukrainian President Volodymyr Zelensky announcing that circumstances in the region are now “under control” and that there’s “no reason to panic” according to The Associated Press.

It appears the earlier hyped messages of an ‘imminent Russian invasion’ have backfired, as Ukraine officials have now turned to castigating the media for spreading a sense of overblown panic and doom among the population. Defense Minister Oleksii Reznikov went so far as to say the threat of a Russian invasion “doesn’t exist” despite there still being “risky scenarios”. Other Ukraine defense officials have echoed this as well…