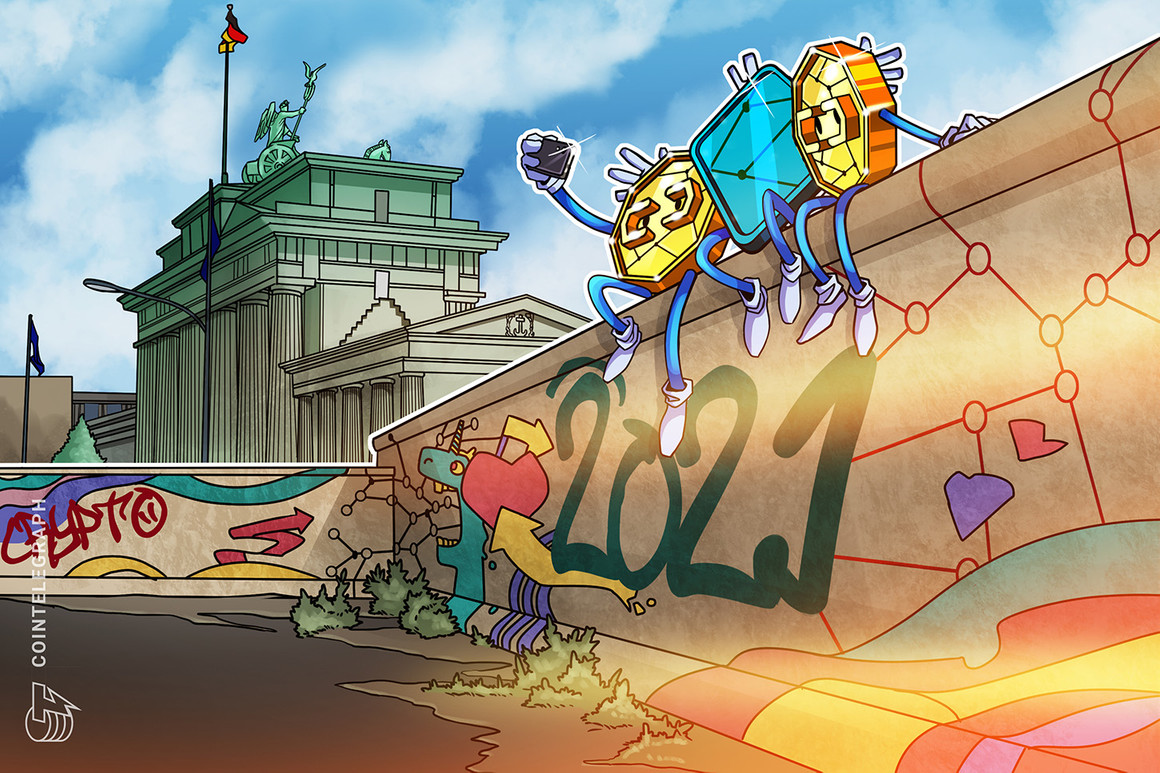 An interesting year has come to an end for the crypto industry in Germany. Although blockchain technology and cryptocurrencies have not yet found wide acceptance in the country, more and more domestic institutions and investors are becoming interested in the crypto world thanks to legal clarity.

Here, we’ll look back at the most important developments in the German blockchain and cryptocurrency industries in 2021.

In terms of legal challenges, German legislators have increasingly been taking a lead role and 2021 was no exception.

In December 2021, the first e-securities were already issued under the new law in the form of bearer bonds from DekaBank. The fast-growing restaurant chain Beets & Roots from Stuttgart also recently issued participation rights on the blockchain via the Invesdor platform.

Another step to boosting blockchain is the introduction of crypto securities. These are issued and managed on a mostly distributed ledger technology-based securities register and now encompass shares of funds. Now existing as a draft, the new ordinance (Verordnung über Kryptofondsanteile) will come into force in 2022.

The Fund Location Act (Fondsstandortgesetz) should also be mentioned as a milestone for the acceptance of digital assets. The act, passed in July 2021, enables special funds like pension and insurers, which are designed specifically for the institutional market, to invest up to 20% of their fund volume in crypto assets. Among large German fund providers, for example, Union Investment has already invested significant capital in Bitcoin (BTC).

Blockchain in the finance industry

According to a recent Bitkom survey, 59% of German companies see blockchain, in general, as an important future technology that is still greatly underestimated. Companies with more than 2,000 employees and/or in the financial sector especially are investigating the use of blockchain.

More and more German financial institutions are developing products and platforms for digital assets. Bison, the crypto trading app of the Stuttgart Stock Exchange, is already enjoying notable success. Since the beginning of 2021, the number of active users of Bison has doubled to around 550,000 while the trading volume is already hitting around $6.3 billion, or 5.6 billion euro.

Exchanges have been able to expand in the country. Austrian crypto exchange operator Bitpanda opened its new location in Berlin in 2021. Coinbase — which became an officially regulated crypto custodian in Germany in August — is building up its German business at full speed.

Banks won’t be left behind either. Private bank Hauck & Aufhäuser expanded its range of services in the area of digital assets, while savings banks want to offer customers trading and investing in major digital currencies like Bitcoin and Ether (ETH) directly from their current accounts.

While the blockchain adoption is increasing in Germany, regulators are responding in different ways to address the risks of an unregulated market.

In July 2021, the Federal Ministry of Finance published a draft regulation that could greatly impact the industry. The document concerns the current tax exemption of crypto investments after a hold period of one year. Specifically, it says, “The divestment period is extended […] to ten years if units of a virtual currency or token are used as a source of income and income has been generated from them in at least one calendar year.”

For investors with German residency, investments in tokens are generally interesting from a tax point of view because after the one-year holding period no more taxes are due on the capital gains. This will now be changed. If tokens are not only held but used for further returns, the holding period increases to 10 years. It, therefore, becomes difficult for the individual investor to use the token beyond buying and holding, as the reporting process is enormously time-consuming.

With this new regulation, Germany loses a lot of competitiveness, but it has advantages too. While the investor is waiting for a tax exemption for the actual investment, they can earn additional returns. But now, the Federal Ministry of Finance is intervening and proposing a change: Anyone who wants to earn an additional return with their crypto assets through staking, for example, automatically extends the holding period from one to ten years.

The federal government also wants to regulate the anonymity of cryptocurrencies. In the future, trading platforms such as crypto exchanges will be obliged to collect information from senders and recipients such as names, addresses and account data.

In addition, the Money Laundering Act will also apply to cryptocurrencies in the future. Transactions with cryptocurrencies must then be disclosed from a value of $1,120, or 1,000 euro at the time of writing.

Soccer opens the door for NFTs

The nonfungible tokens (NFTs) craze exploded in 2021, with museums, auction houses, individual artists and bands taking in record sums with the sale of digital art and certificates in 2021.

Fanzone, a German start-up founded in October 2020 that has already been able to win Porsche as an investor, also got involved in the NFT market in 2021. As an official partner of the German Football Association, it offers trading cards of the German men’s, women’s and under21 national teams.

Blockchain and NFTs have further found novel business applications in media industries. In April 2021, German stock exchange operators Deutsche Börse and Commerzbank announced a partnership with fintech 360X AG to develop digital marketplaces and ecosystems for art and real estate. Similarly, Iota launched a marketplace for NFTs based on tangle technology on DevNet in July 2021.

On the way to the digital euro

2021 was undoubtedly the year of the central bank digital currencies (CBDC) in Germany. The European Central Bank launched a two-year trial phase to investigate the possible introduction of a digital euro, and Germany has taken a leading role.

The Deutsche Bundesbank, the country’s central bank, led a working group of German financial institutions, companies and fintechs to discuss the use of central bank digital currencies.

In March 2021, the Deutsche Bundesbank, Deutsche Börse and the German Federal Finance Agency, together with several major international banks, tested a new procedure for processing digital bond purchases. The trial run showed that bridging the gap between traditional payment systems and blockchain-based transactions is possible.

With more legal clarity and trust, we can expect blockchain innovations and use cases to continue to appear and evolve in Germany in 2022. If market participants, including the so-called Mittelstand, or small and medium-sized enterprises and family businesses — that’s more than 99% of all companies in Germany — are willing to embrace the technology, blockchain has a good chance in Germany.