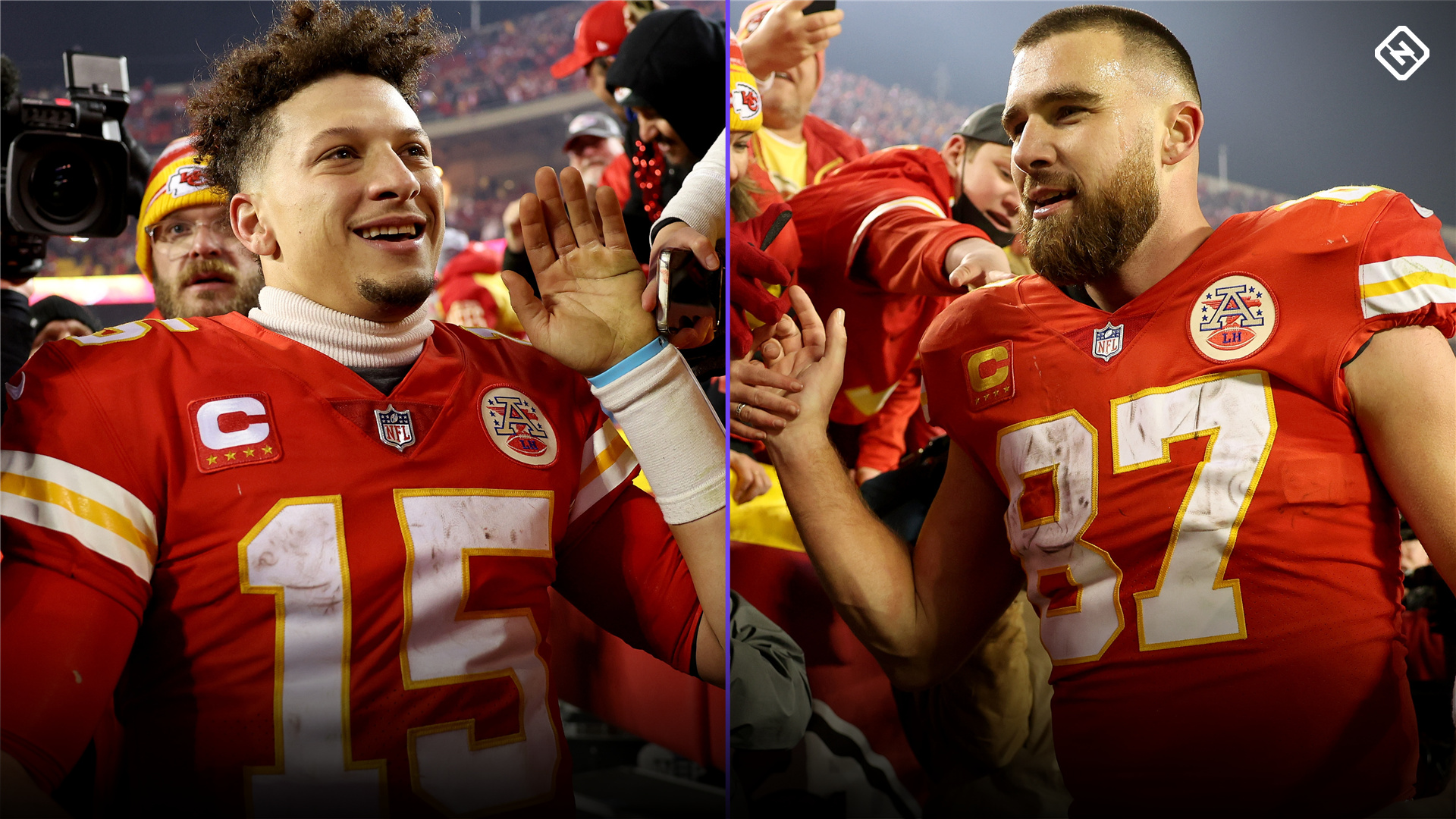 The Chiefs seemed destined to be eliminated with 13 seconds left in their AFC divisional-round playoff game against the Bills.

Gabriel Davis had just scored his fourth touchdown of the night to give Buffalo a 36-33 lead. Kansas City would get the ball back, but it seemed that there was no way the Chiefs would be able to tie the game with 13 seconds left, even with three timeouts in their pocket.

But Patrick Mahomes helped get the job done. He moved the team 44 yards in just two plays spanning 10 seconds to set up Harrison Butker’s game-tying 49-yard field goal. The last-gasp drive kept the Chiefs alive and allowed them to win 42-36 in overtime after they won the coin toss and drove for a touchdown on the first possession of the extra frame.

The Kansas City faithful should be thanking Mahomes and tight end Travis Kelce for the last-second improvisation that helped make the victory possible.

DECOURCY: This time, Patrick Mahomes & the Chiefs win the luck of the draw

Mahomes and Kelce connected on the game-sealing touchdown, but their most important play came during the 13-second drive at the end of regulation. The Chiefs had the ball at their own 44-yard line with eight seconds left and needed to get the ball into field-goal range on the next play to avoid going for a low-probability Hail Mary on the final play of the contest.

That’s when Kelce recognized a hole in the Bills’ defense. Buffalo was playing soft coverage and almost a prevent type of look. The Bills were leaving the middle of the field open while guarding the sideline, which opened up a lot of space in which Kelce could work.

Kelce was able to tell Mahomes about the hole he saw after the Bills took a timeout. The duo agreed that if it happened again, Kelce would freelance, make up his own route and look to get open over the middle of the field and get downfield fast.

“We got a look at what the defense was doing,” Mahomes said, per the Kansas City Star. “And he actually said, ‘Hey, if they do it again, I’m gonna take it right down the middle between both the guys guarding me.’”

Buffalo showed the same look after the timeout. Mahomes then called the audible, giving Kelce permission to run his own route.

“Do it, Kels! Do it! Do it, Kels!” Mahomes barked to his tight end, as you can hear underneath the commentary on the CBS broadcast.

Obviously, the play worked, as Kelce’s unorthodox route allowed him to break open right away. Mahomes was able to fire the ball to him quickly, which negated the effect of oncoming Buffalo pressure. The play took just five seconds to run from snap to finish.

“It was just a little backyard football with a couple of seconds left,” Kelce said, “that gave us an opportunity to take the game into overtime.”

BY THE NUMBERS: Breaking down the wild Chiefs vs. Bills game

When the Bills kicked the ball back to the Chiefs after their go-ahead touchdown, they had a 91 percent win probability. The Chiefs managed to change that quickly.

Here’s a run-down of how key events during the Chiefs’ final two drives changed the team’s win probability.

The Chiefs had just a 9.5 percent win probability after their first pass with under 13 seconds left. Hill caught a short pass from Mahomes and turned it into a 17-yard gain with the Bills playing extremely soft coverage. The play took just five seconds to run and Hill was able to get out of bounds to stop the clock.

Kelce’s catch represented a massive improvement to the Chiefs’ win probability. It jumped from 9.5 percent to 33.7 percent after the 25-yard reception. That 24.2 percent change represented one of the biggest shifts in win probability during the game.

The Chiefs had to make a 49-yard field goal to send the game to overtime. He was able to do that, despite missing a shorter field goal and an extra point earlier in the contest, and that tied the game as regulation expired. That made the Chiefs’ win probability 50 percent.

IYER: How the Bills’ defense collapsed during final 13 seconds

For those wondering, ESPN’s win probability metric was not impacted by the Chiefs winning the overtime coin flip. In fact, after the Bills kicked a touchback to start overtime, the Chiefs’ win probability dropped to 49.9 percent. That represented the last time that the Bills were favored to win Sunday night’s game.

However, NFL data analyst Michael Lopez estimates that the Chiefs’ win probability after the coin flip actually improved to 62.5 percent, per time stamps from Gambletron. That probably better reflects the advantage of Kansas City winning the coin toss, especially since teams winning the overtime coin toss are 10-1 in the playoffs since 2011.

Hardman caught a pass on the penultimate play of the game and turned it into a 26-yard gain. That moved the Chiefs from the Bills’ 34-yard line to the eight and set up a first-and-goal opportunity. It shifted the Chiefs’ win probability from 68 percent to 90.1 percent, marking a 22.1 percent change, the second-largest after the 13-second mark in regulation.

On the final play of the game, Kelce caught the game-winning touchdown, which obviously gave the Chiefs 100 percent win probability.

That completed the 91-percent swing in just 4:28 of game time and capped off a wild finish to the game, as you can see from the full win probability chart below.