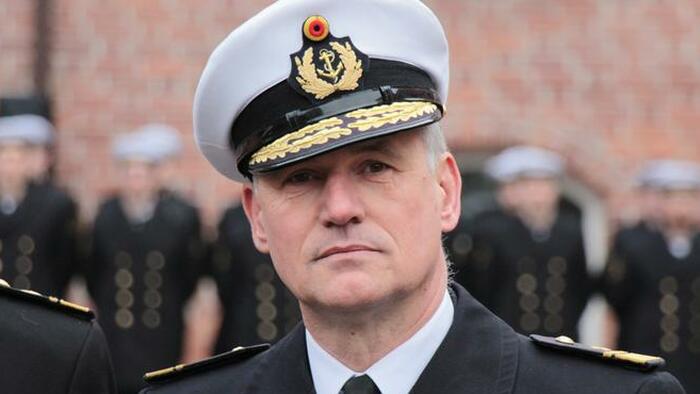 
Just as the covid narrative is slowly disintegrating even as its MSM propaganda powers “cancel” anyone who dares to speak out against the lies  – so the “Russia is about to invade Ukraine” plotline just suffered a major blow after the chief of Germany’s navy, vice-admiral Kay-Achim Schönbach , said on Friday that Crimea “will never come back”, and that what Putin “really wants is respect…and it is easy to give him the respect he really demands – and probably deserves.”

And sure enough, just one day later, on Saturday evening, he resigned from his post for having the temerity to speak out against conventional wisdom.

“I have asked Defense Minister Christine Lambrecht to relieve me from my duties with immediate effect,” Schoenbach said in a statement cited by the Reuters news agency.

“The minister has accepted my request,” he added.

Speaking at an event organized by the Manohar Parrikar Institute for Defence Studies and Analyses on Friday, the vice-admiral redpilled the shocked audience when he dismissed as “nonsense” the notion that Russia was “interested in having a small and tiny strip of Ukraine soil and integrating it into their country.”

“Does Russia really want a small and tiny strip of Ukraine soil to integrate into their country? No, this is nonsense. Putin is probably putting pressure because can do it and he splits EU opinion.”

Schönbach went on to claim that what President Putin really wanted was the West to “respect” Russia, adding “giving some respect is low cost, even no cost. If I was asked, it is easy to give him the respect he really demands and probably also deserves.“

Addressing the issue of Crimea, the German Navy commander opined that the “peninsula is gone” and “will never come back — this is a fact.”

On Ukraine’s possible admission into NATO, Schönbach said, “Ukraine of course cannot meet the requirements because it’s occupied in the Donbas region by the Russian Army or by what they call as militias.” In this context, he also said the Crimea peninsula, which was annexed by Russia, is “gone” and is “not coming back”.

Then in an even greater transgression of conventional pro-China etiquette, the German had the temerity to point out the elephant in the room when he slammed China which is “not that nice country we probably thought” and added that that “Russia is an old country, Russia is an important country. Even we India, Germany, need Russia. We need Russia against China…” This, he said, is “easy” and “keeps Russia away from China” because China needs resources of Russia and they [Russia] are willing to give them because the sanctions sometimes do go the “wrong way”.

German Navy Chief VAdm Kay-Achim Schönbach minicing no words while pointing out concerns with China at @IDSAIndia event in Delhi. Highlights how “… China is not that nice country we probably thought” pic.twitter.com/IkXqYhfLLv

Describing China as a growing “hegemonic power” which is using its money and power to put pressure on the international order, Schönbach said China has behaved as an enemy to some and has a “hidden agenda” in dealings with countries.

Giving an example of Chinese attempts to steal technology, the German Navy Chief spoke of Kuka robotics, a German company which was taken over by a “private” Chinese company and the “whole technology was gone” and “China is not paying back”.

In the context of this and other developments, he recalled German politicians’ view of China and said they believe that, “China is not that nice a country we probably thought of.”

Schönbach’s comments, which he insists were made in a private capacity, stirred up a diplomatic scandal, with Ukraine’s foreign ministry summoning the German ambassador to the country, Anka Feldhusen, on Saturday. Kiev described his remarks as “unacceptable.”

“Ukraine is grateful to Germany for the support it has already provided since 2014, as well as for the diplomatic efforts to resolve the Russian-Ukrainian armed conflict. But Germany’s current statements are disappointing and run counter to that support and effort,” Ukrainian Foreign Minister Dmytro Kuleba said on Twitter.

“The German partners must stop undermining unity with such words and actions and encouraging (Russian President) Vladimir Putin to launch a new attack on Ukraine,” Kuleba added.

Kyiv also highlighted its “deep disappointment” at the German government’s position “on the failure to provide defense weapons to Ukraine.” The lack of weapons support is another point of contention between the two countries. On Friday, reports emerged about Germany blocking Estonia from sending its German-made weapons to Ukraine.

And while it is unclear if the establishment was more shocked by his comments about Putin, Russia and Ukraine or his brutal honesty about China, what followed has been no less than a “political earthquake” with the country’s defense ministry immediately distancing itself from the controversial statements, and its spokesperson saying that characterizing the vice-admiral’s comments as not reflecting “in any way the position” of the ministry, both “in terms of the content and choice of words.”

In a bid to diffuse the situation, the (now former) Navy commander took to Twitter earlier on Saturday, saying that he “should not have done it that way,” and describing his remarks as a “clear mistake.”

“My defense policy remarks during a talk session at a think tank in India reflected my personal opinion in that moment. They in no way reflect the official position of the defense ministry,” he wrote.

But several hours later, his name and photo disappeared from the official Navy chief’s Twitter handle and its bio was changed to “currently vacant”.

Moscow, which views any NATO expansion into Ukraine as an existential threat to its national security, has consistently rebutted claims made by Western media and senior officials, according to which Russia is allegedly planning to invade its neighbor any day now. The Kremlin has called the idea “fake news,” while raising issue with the fact that some Western nations are sending weapons to Ukraine. Last month, Russia sent proposals to the US and NATO for treaties with security guarantees, but so far negotiations were unsuccessful in finding terms for an agreement.

Meanwhile, so-called “progressive, liberal” powers in the west are actively pushing for “kinetic” intervention, one which could quickly spiral out of control and escalate into a global war.