The Dow Jones Industrial Average fell sharply on Tuesday after Goldman Sachs released poorer-than-expected Q4 results. The bank’s earnings per share (EPS) came in at $10.81, compared to $11.76 estimate, according to Refinitiv. The management attributed this to a sharp increase in operating expenses due to rising labor costs, higher litigation reserves and a slowdown in trading. Its share price plunged 7% after the earnings release, pulling the financial sector down by 4% on Wall Street overnight.

Last week, JPMorgan and Citigroup also disappointed by giving weaker-than-expected forward guidance. Both banks highlighted rising labor costs and moderating Wall Street revenue. So far in the earnings season, around 60% of the S&P 500 companies said that labor costs and shortages have had negative impact on revenue. Wage inflation may put further pressure on the Fed to raise policy rates as soon as possible to rein in price levels.

The rate of 10-year US Treasuries climbed to a fresh two-year high of 1.875%, exerting downward pressure on equities as bonds offer an alternative to risk assets. Yields have climbed for three days in a row, showing no sign of stopping any time soon as the market mulled rising labor costs and higher energy prices. If yields continue to march higher, the rate-sensitive tech sector may be vulnerable to a deeper pullback because they are generally low-yielding and highly leveraged.

WTI crude oil prices surged to the highest level since Oct 2014, underscoring strong physical demand and a tight market of supply. Rising demand for oil suggests that the Omicron variant is having a much smaller impact than Delta, allowing economies to recover faster. Meanwhile, a rapid surge in crude oil prices will likely lead to further inflationary pressures, spurring the Fed to tighten faster and quicker.

Asia-Pacific markets look set to open on the back foot. Futures in Japan, Australia, South Korea, Taiwan, Singapore, India, Thailand and Indonesia are in the red. Those in mainland China and Hong Kong are in the green.

Japan’s Nikkei 225 index was weighed by rising coronavirus cases and higher yields, falling 0.27% on Tuesday. The index looks set to fall at open following a sour lead on Wall Street. The country reported more than 20,000 new daily cases for the fourth straight day. The Bank of Japan (BOJ) lifted growth and inflation forecasts for 2022, while keeping its policy rate and asset purchases unchanged in a monthly meeting on Tuesday. The bank said that the risks to Japan’s price outlook are “roughly balanced” – a slight tweak from “skewed to the downside” previously.

Looking ahead, German, UK and Canadian inflation data lead the economic docket alongside US housing start readings. Find out more from the DailyFX calendar. 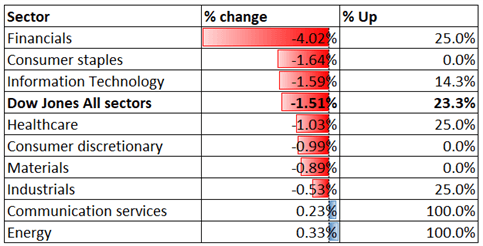 The Dow Jones Industrial Average has likely formed a bearish “Butterfly” chart pattern and has since entered a technical correction. An immediate support level can be found at 35,390 – the 50% Fibonacci retracement, followed by 35,020 – the 61.8% Fibonacci retracement. The previous high (point D) serves as a key resistance. The MACD indicator has formed a bearish crossover, underscoring downward momentum. 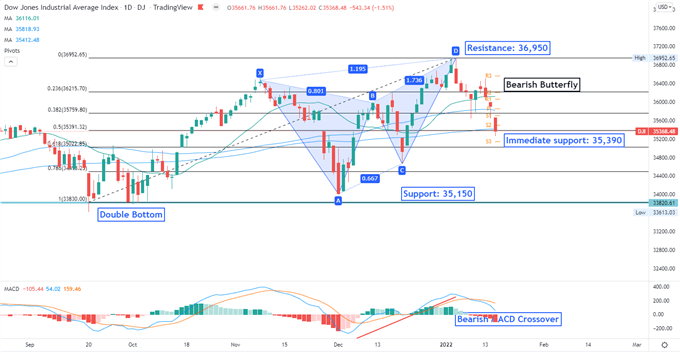 The Nikkei 225 index is hovering within a “Symmetrical Triangle” pattern over the past few month, waiting for fresh catalysts for a decisive breakout. The September high of 30,700 serves as a key resistance level, whereas the lower trendline may provide some near-term support. A breakdown below the lower trendline may intensify selling pressure and open the door for further losses. The MACD indicator has formed a bearish crossover and trended lower, suggesting that near-term momentum remains weak. 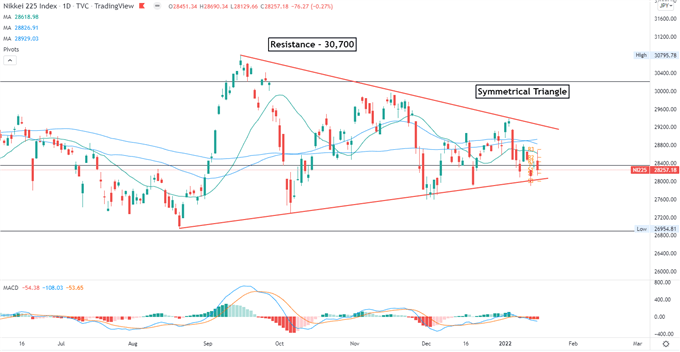 The ASX 200 index is trading within a range-bound zone between 7,200 to 7,500 for a few months. The floor and ceiling of the range may be viewed as immediate support and resistance levels respectively. The overall trend remains bullish-biased, as the MACD indicator pierced through the neutral midpoint and moved higher. A meaningful breach above 7,500 may intensify buying pressure and expose the next resistance level of 7,760. 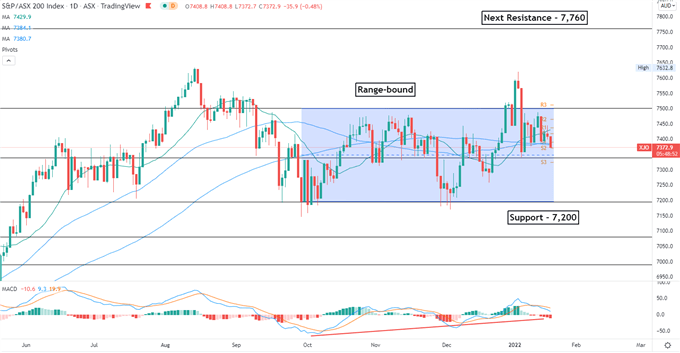