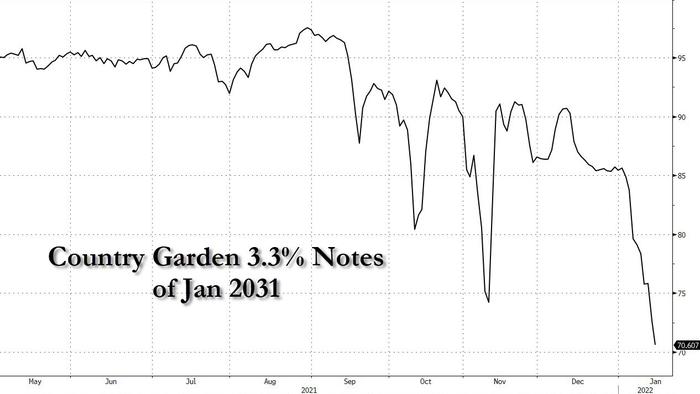 
The crisis engulfing China’s property sector – which has prompted Beijing to capitulate on its tightening ambitions yet again, and forced China to launch an increasingly more aggressive easing campaign, which so far culminated in the first rate cut in Chinese official rates in almost two years – has impacted the country’s biggest developer, sending the shares and bonds of Country Garden Holdings – which is even bigger than Evergrande – plunging amid fears that a reportedly failed fundraising effort may be a harbinger of waning confidence.

Country Garden is one of the few remaining large, (arguably) better-quality private developers that had been largely unscathed by the liquidity crunch, even as peers such as Shimao Group Holdings – a recently investment grade developer whose collapse in December was viewed as “more devastating than debt crises at Evergrande and Kaisa” – dramatic reversals in their credit ratings.

At least until now… and now that Shimao has imploded, Country Garden remains perhaps the final and most visible bellwether for contagion risk, as unprecedented levels of stress in the offshore credit market threaten to drag good credits down with bad.

Since taking the top spot from China Evergrande Group in 2017, Country Garden has remained the nation’s largest developer in China by contracted sales. It employs more than 200,000 people.

Headquartered in the southern city of Foshan in Guangdong province, the firm – like China Evergrande Group – has focused in recent years on building housing developments in lower-tier cities.

And, like Evergrande, Country Garden has also relied heavily on access to funding in the offshore credit market; actually not just Evegrande but virtually all developer peers that binged on debt to fuel growth in the past decade only to see the window slam shut now. According to Bloomberg, it has the largest pool of outstanding US dollar bonds among China’s biggest property firms, excluding defaulters, with some US$11.7 billion outstanding, Bloomberg-compiled data showed.

Founding chairman Yeung Kwok Keung transferred his controlling stake to his daughter Yang Huiyan in 2005. She is now the firm’s vice-chairman and is the richest woman in China, according to the Bloomberg Billionaire Index.

Or at least she was, because on some of Country Garden’s US dollar notes plunged to record lows in the wake of a report that the firm failed to win sufficient investor support for a possible convertible bond deal. Longer-dated bonds were trading as low as 69 cents on the dollar as of late Friday.

This is notable because China’s developer was relatively resilient in the face of the liquidity crisis sparked by a government crackdown on excessive borrowing by builders and housing market speculation, and had been unscathed by the crisis at industry giant Evergrande. But just as we warned back in September, China’s slow-motion real estate crisis which revolves around what Goldman calculated last year was the world’s largest asset which absent significant stimulus from Beijing, is facing a very painful derating.

According to Bloomberg, while Country Garden is not facing imminent repayment pressure – it has US$1.1 billion of dollar bonds due this year and had 186 billion yuan (S$39.5 billion) of available cash as of June last year – risks may emerge if it is seen to have limited access to funding. Any sign of doubt in the firm’s capacity to weather liquidity stress risks may prompt a widespread repricing of other higher-quality developers. With more than 3,000 housing projects located in almost every province in China, Country Garden’s financial health has immense economic and social consequences, far greater than Evergrande.

Worse, if the firm starts showing signs of stress, it will severely damage already fragile investor and homebuyer confidence, posing threats to China’s economy and even social stability. And that’s when China’s Lehman moment will truly emerge.

Where it gets challenging is that similar to Evergrande, more than 60% of Country Garden’s contracted sales in mainland China came from the third- and fourth-tier cities, said its 2021 interim report. Demand in lower-tier areas may significantly weaken in 2022, said a forecast by Fitch analysts. Being a “pure developer”, it is less flexible when it comes to raising cash by selling assets, said Bloomberg Intelligence analyst Andrew Chan.

Country Garden’s strategy is to manage its current assets effectively, in addition to expanding its business, the told Bloomberg News, although it clearly did not anticipate the recent meltdown in its bonds. “The firm is experiencing less volatility than the overall market” amid a broader market downturn, it said. The developer sold bonds and asset-backed securities in the local market in December, reflecting support from both investors and regulators, and maintained its ratings at all 3 major rating firms last year, said the comments.

Country Garden holds both investment-grade and high-yield credit ratings from the 3 major risk assessors, making it a so-called crossover name that could be vulnerable to becoming a ‘fallen angel’. That could in turn raise its borrowing costs and eliminate yet another builder from the dwindling pool of higher-rated developers that investors can turn to during the credit squeeze.

It has the equivalent of an investment-grade triple B rating at both Moody’s Investor Services and Fitch Ratings, and the highest possible speculative-grade rating at S&P Global Ratings. Still, the borrower is likely to “strengthen its financial resilience by controlling debt growth and maintaining disciplined land acquisitions”, S&P analysts wrote in a September report that reaffirmed its rating.

Still, the builder may find it difficult to revive sales in 2022 with weakening market sentiment in lower-tier cities, where 77 per cent of its land bank is located, said Bloomberg Intelligence analyst Kristy Hung. The firm’s sizeable amount of newly acquired land continues to be located in such areas, raising further concern about cash collection, she wrote.

Meanwhile, in the latest wave of selling, investors are now scrutinizing Country Garden’s capacity to raise funding from a variety of channels, particularly as the offshore credit market remains effectively closed to most developers. It needs to repay or refinance some US$1.3 billion on bonds this year, the majority of which are dollar notes. Its next maturity is a US$425 million bond due Jan 27.

The selling in Country Garden’s bond accelerated last week after the company struggled to tap the market for fresh funds, reportedly pulling a $300 million convertible bond issue due to weak demand. At the same time, Sunac’s shares sank a record 23% after it sold new equity. Focus has also turned to the spillover effects of Country Garden’s falling bond prices on the notes of other stronger developers as fears of contagion risks remain elevated.

Just to shore up confidence that it won’t be the next Evergradnde, a statement on the Hong Kong stock exchange late Monday said  that Country Garden bought back an aggregate principal amount of $5m of 4.75% notes due July 2022 and $5m of 7.25% notes due April 2026. And even though the company added that it would monitor market conditions and “may make further repurchase of its bonds”, we are concerned that this tiny, theatrical $10MM buyback will do little to restore investor confidence.

And as investors nervously eye the fate of China’s largest developer, fresh turmoil rocked Chinese property bonds on Monday on concern over the true scale of the industry’s hidden debts according to Bloomberg, deepening a selloff among higher-rated firms.

The latest selloff was catalyzed by a Debtwire report according to which Logan Group could be on the hook for $812 million of guarantees on outstanding obligations due through 2023. The news hammered Logan’s note due 2023 which sank 14.1 cents to a record low 62.9 while Country Garden’s shorter-dated bond due 2024 tumbled 12.9 cents to 67.7 cents, extending last week’s selloff for the country’s biggest developer.

According to Bloomberg, the selling in Property stocks is morphing from one catalyzed by specific event to one sparked by mounting concerns about the transparency of China’s better developers, and is forcing bondholders to question the liquidity of firms whose finances appear sound. More debt would mean more creditors, some of whom could demand early repayment. There’s also the risk that hidden liabilities like trust loans, private bonds or high-yield consumer products receive preferential treatment over money owed to offshore creditors. China Evergrande Group, Kaisa Group Holdings Ltd. and Shimao Group Holdings Ltd. have all faced such obligations.

While Logan, whose bonds traded at close to par as recently as last month, and which rated the equivalent of a BB rating at all three major credit risk assessors, denied both the report and market speculation the company has privately sold debt, that did little to ease the puke in its bonds which quickly spilled over to the rest of the property segment.

“Risks across the Chinese property sector are rising, evident from difficult refinancing conditions for even the most well-regarded firms,” said Wei Liang Chang, a macro strategist at DBS Bank Ltd. Greater clarity on the disclosure of liabilities as well as asset sales are crucial to shore up confidence, he added.

Real estate financing received by developers plunged about 19% in December from a year earlier, the sharpest decline in more than seven years, according to Bloomberg calculations based on full-year government figures released Monday. Home sales by value declined 19.6% in December from a year earlier, a sixth consecutive monthly drop, while property investment shrank 14%.

According to Bloomberg calculations, at least seven developers have defaulted on dollar bonds since October. That includes Evergrande, whose crisis has ensnared lender China Minsheng Banking, the world’s worst-performing bank stock. Guangzhou R&F Properties Co. was downgraded to restricted default by Fitch Ratings last week due to what the ratings firm called a distressed debt exchange.

As if that wasn’t enough, there remains the problem of the frozen bond market. With bond yields of property developers at stratospheric levels, Chinese property firms need to repay or refinance some $99 billion of local and offshore bonds this year. Just under half of that is outstanding dollar debt, Bloomberg-compiled data show.

Bottom line: as much as Beijing wants to, it will have to step in and bailout not just the property developers but the entire housing markets, where transactions have cratered and confidence has evaporated. And to do that, China will have to ease financial conditions much more aggressively than it has done so far – yes, overnight Beijing cut rates for the first time since 2020, but that step is nowhere near enough. To avoid an all out depression, Beijing will have to do much, much more… and not just Chine but the rest of the world’s central banks too.  Which is why anyone who believes that the current tightening euphoria will last more than a few months, well we have a bridge in Wuhan  we’d like to sell you.

Are Ethereum, Shiba Inu, and Mehracki Ready to Lead a Crypto Boom?