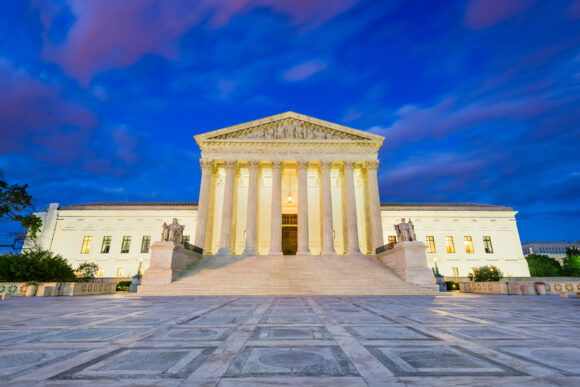 
The Supreme Court yesterday blocked the Biden Administration from implementing an order requiring businesses with more than 100 employees to require COVID-19 vaccines or testing and masks for their employees.

In National Federation of Independent Business v. Occupational Safety And Health Administration, a majority of six justices granted a stay against the COVID-19 order, finding that the order, known as an Emergency Temporary Standard, exceeds OSHA’s statutory authority because it targets a public health risk and not a risk confined to workplaces. No provision of the Occupational Safety and Health Act of 1970 addresses public health generally, which falls outside of OSHA’s sphere of expertise, they agreed.

Three justices in dissent found to the contrary that the Biden Administration’s emergency rule is consistent with OSHA’s authority and precedent, while also arguing that the order is not a vaccine mandate because it allows the option of testing and masks.

In a separate ruling, the court upheld a vaccine requirement for healthcare workers who are employed at medical facilities that participate in Medicare and Medicaid. The government has also required all federal workers to be vaccinated.

OSHA had said its emergency temporary standard would protect more than 84 million workers from the spread of the coronavirus on the job.

Yesterday’s ruling largely leaves it up to Congress, businesses and states to decide what, if anything, to do, although the court left open the door for OSHA to issue narrower requirements for specific workplaces.

President Joe Biden expressed disappointment with the decision and called upon businesses and states to act.

In prepared remarks, Biden said, “The court has ruled that my administration cannot use the authority granted to it by Congress to require this measure, but that does not stop me from using my voice as president to advocate for employers to do the right thing to protect Americans’ health and economy.”

The central objection from the majority was that the rule went beyond the authority Congress gave the Occupational Safety and Health Administration that issued the rule:

“Although COVID– 19 is a risk that occurs in many workplaces, it is not an occupational hazard in most. COVID–19 can and does spread at home, in schools, during sporting events, and everywhere else that people gather. That kind of universal risk is no different from the day-to-day dangers that all face from crime, air pollution, or any number of communicable diseases. Permitting OSHA to regulate the hazards of daily life—simply because most Americans have jobs and face those same risks while on the clock—would significantly expand OSHA’s regulatory authority without clear congressional authorization.”

“OSHA’s indiscriminate approach fails to account for this crucial distinction— between occupational risk and risk more generally—and accordingly the mandate takes on the character of a general public health measure, rather than an ‘occupational safety or health standard.’

However, the court added, OSHA does not lack authority to regulate occupation-specific risks related to COVID–19. Thus OSHA could act if there is “special danger because of the particular features of an employee’s job or workplace” with targeted regulations. The opinion cites as examples regulating researchers who work with the COVID–19 virus and people working in particularly crowded or cramped environments.

“But the danger present in such workplaces differs in both degree and kind from the everyday risk of contracting COVID–19 that all face,” the court said. “OSHA’s indiscriminate approach fails to account for this crucial distinction— between occupational risk and risk more generally—and accordingly the mandate takes on the character of a general public health measure, rather than an ‘occupational safety or health standard.’”

The six justices reiterated their view that Congress has not given that agency the power to regulate public health more broadly. “Requiring the vaccination of 84 million Americans, selected simply because they work for employers with more than 100 employees, certainly falls in the latter category,” they concluded.

In closing a concurring opinion in which he was joined by Justices Thomas and Alito, Justice Gorsuch acknowledged the ruling comes at a time of stress:

“The question before us is not how to respond to the pandemic, but who holds the power to do so. The answer is clear: Under the law as it stands today, that power rests with the States and Congress, not OSHA. In saying this much, we do not impugn the intentions behind the agency’s mandate. Instead, we only discharge our duty to enforce the law’s demands when it comes to the question who may govern the lives of 84 million Americans. Respecting those demands may be trying in times of stress. But if this Court were to abide them only in more tranquil conditions, declarations of emergencies would never end and the liberties our Constitution’s separation of powers seeks to preserve would amount to little.”

Justices Stephen Breyer, Sonia Sotomayor and Elena Kagan dissented, maintaining that the rule is within the authority of OSHA and OSHA did what Congress told it to do in the 1970 laws and in COVID-19 legislation more recently: it took action to address COVID–19’s threat in work spaces.

Nothing in the OSHA statute text supports the majority’s limitation on OSHA’s regulatory authority, the dissenters argue, adding that the law is “indifferent to whether a hazard in the workplace is also found elsewhere.”

Citing the 1970 statute, they argued that the virus that causes COVID–19 is a “new hazard” as well as a “physically harmful” “agent” and the virus also poses a “grave danger” to millions of employee. Further, as the law requires, the standard is “necessary” to address the danger of COVID–19 and is based on a host of studies and government reports showing why those measures of vaccines, testing and masks are of “unparalleled use in limiting the threat of COVID–19 in most workplaces,” they wrote.

They maintained that by staying the rule, the court is acting “outside of its competence and without legal basis, displacing the judgments of the government officials given the responsibility to respond to workplace health emergencies.”

Nothing in the OSHA statute text supports the majority’s limitation on OSHA’s regulatory authority, the dissenters argue, adding that the law is “indifferent to whether a hazard in the workplace is also found elsewhere.”

They argued that OSHA has long regulated risks that arise both inside and outside of the workplace, and maintained that COVID–19 spreads more widely in workplaces than other revenues “because more people spend more time together there. And critically, employees usually have little or no control in those settings.”

The dissent says that “virtually every workforce and workplace” has been transformed by COVID-19, with employers and employees responding to risks of transmission in work environments. “It is perverse, given these circumstances, to read the Act’s grant of emergency powers in the way the majority does— as constraining OSHA from addressing one of the gravest workplace hazards in the agency’s history,” they insisted. “It lies at the core of OSHA’s authority. It is part of what the agency was built for.”

For Bruce Pearl to march from No. 1 Auburn to the head coaching job at Louisville would be madness

Australian Open prize money: How much will the winners make in 2022? Purse, breakdown for field