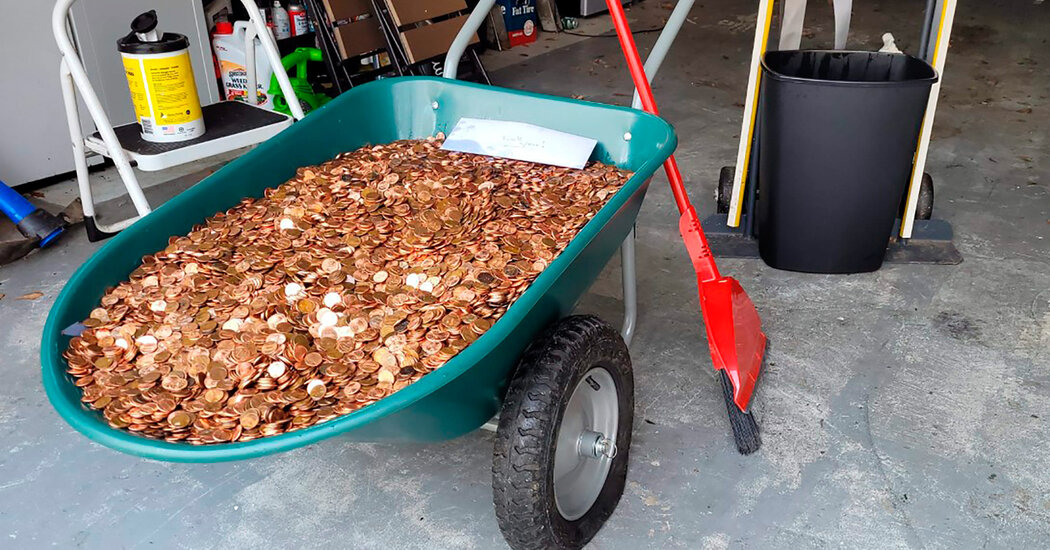 
The owner of a Georgia auto-repair shop who dumped 91,500 oil-covered pennies in a former employee’s driveway was not just creating a sticky mess that took nearly seven hours to clean up, the U.S. Department of Labor said.

He was also retaliating against the former employee for having complained to the department that he had not received his final paycheck, the agency said in a lawsuit that accuses the shop owner of violating federal labor law.

The lawsuit represents the latest turn in an employment dispute that gained nationwide attention last year after the former employee’s girlfriend posted a video of the oily pennies on Instagram, attracting the sympathies of thousands of people who said they, too, had contended with difficult bosses.

The lawsuit, filed on Dec. 30 in U.S. District Court for the Northern District of Georgia, claims that the shop owner, Miles Walker, and his shop, A OK Walker Autoworks in Peachtree City, Ga., retaliated against the former employee after he called the department on Jan. 26, 2021, to report that he had not received his final paycheck, for $915, after he resigned.

Mr. Walker initially claimed that his shop had prepared the paycheck but that “it never made it to the mail,” the lawsuit says.

When a Labor Department representative called Mr. Walker about the paycheck on Jan. 27, Mr. Walker said he would not pay it, according to the lawsuit. But hours later, Mr. Walker decided to pay the former employee, Andreas Flaten, in pennies.

“How can you make this guy realize what a disgusting example of a human being he is,” Mr. Walker said, according to the lawsuit. “I’ve got plenty of pennies; I’ll use them.”

On March 12, 2021, Mr. Walker left the mound of 91,500, oil-soaked pennies on Mr. Flaten’s driveway. On top of the pile, he left a copy of Mr. Flaten’s paycheck with an expletive written on it, the lawsuit said.

The next day, Mr. Flaten’s girlfriend posted the video on Instagram. As the penny pile drew widespread news coverage, Mr. Walker posted a message on the shop’s website.

In a statement, the Labor Department called that message “defamatory” and said that Mr. Walker had retaliated against Mr. Flaten in violation of the Fair Labor Standards Act.

“By law, worker engagement with the U.S. Department of Labor is protected activity,” Steven Salazar, district director of the department’s wage and hour division in Atlanta, said in a statement. “Workers are entitled to receive information about their rights in the workplace and obtain the wages they earned without fear of harassment or intimidation.”

The lawsuit, which also accuses Mr. Walker and his shop of failing to pay legally required overtime rates and failing to keep adequate and accurate records of employees’ pay rates and work hours, seeks $36,971 in back wages and damages for at least eight employees in addition to Mr. Flaten.

Mr. Walker did not immediately respond on Saturday to an email and a phone message left at the shop.

He told CBS46 in March that he could not remember if he had dropped the pennies on Mr. Flaten’s driveway. “It doesn’t matter — he got paid, that’s all that matters,” Mr. Walker said.

Mr. Flaten and his girlfriend, Olivia Oxley, said last year that they had spent hours hauling about 500 pounds of pennies in a wheelbarrow up the slope of his driveway into his garage, before the weight of the coins caused the wheelbarrow’s tires to collapse.

On Saturday, Mr. Flaten said Coinstar had eventually collected the pennies, washed them and counted them and had given him paper currency in return that was close to the $915 he was owed.

Mr. Flaten described the lawsuit as a “pleasant surprise,” saying he had not been sure what to expect when he first called the Department of Labor last year to report that he had not received his final paycheck.

“I am happy to see justice is being served,” he said. “At first, I thought he pretty much got away with it.”