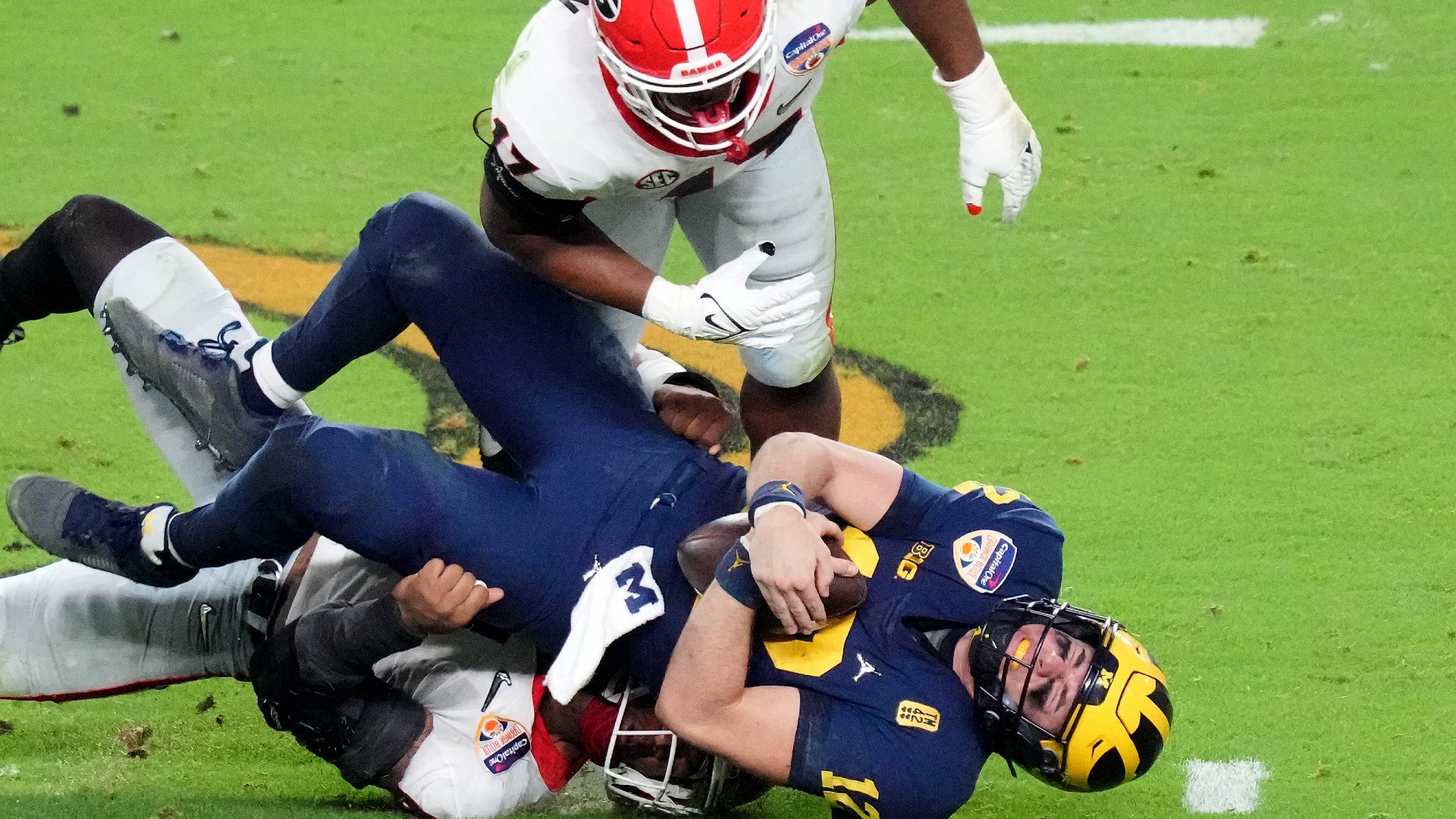 In a pregame sideline interview, Michigan coach Jim Harbaugh gave an emphatic response when asked about the Wolverines’ ahead of their College Football Playoff semifinal against Georgia.

It might not seem like it, but No. 2 Michigan took that next step. No. 3 Georgia outclassed the Wolverines in a 34-11 blowout that set up another all-SEC matchup in the College Football Playoff championship matchup with No. 1 Alabama on Jan. 10.

Harbaugh got that first chance at the playoff stage, and the Wolverines found out how hard it will be to make that jump from Big Ten champion to true national championship contender.

Georgia was too much. The Bulldogs have a roster with 19 five-star players. Michigan has three. In a game with that difference in elite talent, Georgia erased any margin for error with two quick first-quarter TD drives. The Bulldogs had a play of 20 yards or more in each of their first five drives, and all of them resulted in points. It was 27-3 by halftime.

That could be seen on the field. It’s the difference on the perimeter, where Georgia exploited mismatches in the back seven for a 57-yard TD to Jermaine Burton and a 39-yard TD to James Cook. It’s the difference on the interior, where a Georgia front seven led by All-Americans Jordan Davis and Nakobe Dean limited Michigan to 84 yards rushing. Star running back Hassan Haskins had 39 yards.

It’s not a step backward. It’s a reality check for Michigan. The drive to stay with Ohio State and accumulate the talent necessary to run with Georgia and Alabama, which beat the Wolverines 35-16 in the 2020 Citrus Bowl, is the new-found challenge.

The SEC remains a company-wide problem for the Big Ten on the elite stage. Ohio State beat Alabama 42-35 in the Sugar Bowl in the first year of the College Football Playoff, but that was the exception. The Big Ten is now 3-7 against the SEC in BCS or New Year’s Day Six bowls, and the last four have been blowouts. Michigan has been on the losing end of two of those games and hasn’t won a game on that stage since Tom Brady’s comeback in the 2000 Orange Bowl against Alabama.

Make no mistake, these are the SEC vs. Big Ten bowls that really matter.

That neither excuses Michigan for the blowout loss to Georgia nor devalues what was accomplished this season. Michigan broke a 10-year drought against Ohio State. The Wolverines won their first Big Ten championship since 2004. That should lead to gains on the recruiting trail, and Harbaugh did that in a hot-seat season that put the program in the limelight for the right reasons for the first time since the embarrassing loss to Appalachian State in 2007.

“I think we climbed mountains that nobody thought we could climb,” said Michigan DE Aidan Hutchinson. “We set a new standard for Michigan football moving forward.”

Look at that list again. Ohio State and Michigan are the only two schools with a victory against SEC schools on those stages. The Buckeyes have won two national championships in that stretch, however, and the Wolverines have been asking for more since their national championship in 1997. That is the big-stage difference between the Big Two in the Big Ten.

What does more mean for Michigan in 2022?

The big question will be quarterback. Freshman J.J. McCarthy (7 of 17, 131 yards, TD) saw most of the snaps in the second half, which is the precursor to the quarterback battle with Cade McNamara (11 of 19, 106 yards, 2 INTs) heading into 2021. McCarthy is one of those five-star players on the roster, and he plays the most-important position. Four-star freshman running back Donovan Edwards is an excellent running mate.

Now, it means finding more talent on the perimeter on both sides to deal with that SEC speed. Notre Dame, the other Rust Belt power, had that problem against Alabama in the CFP loss last season. So did Ohio State.

None of those schools are frauds outside the snarky social media definition. With the exception of that Sugar Bowl upset under former Ohio State coach Urban Meyer, however, they are all still playing a half-step behind the SEC 1-2 punch of Alabama and Georgia on the field and recruiting trail. The Buckeyes still remain the best bet to challenge that on any given year. The Wolverines, meanwhile, are now 1-4 in bowl games against SEC schools.

How does Michigan make that up? Harbaugh must capitalize on the momentum from 2021 and show this wasn’t a one-off against the Buckeyes and the rest of the Big Ten. Harbaugh took a reduced salary and made several shrewd offseason hires, including defensive coordinator Mike Macdonald and running backs coach Mike Hart, that put Michigan back in the right direction.

The Wolverines will be good enough to compete for another Big Ten championship in 2022, but that will be hard, too.

Michigan has not won at Ohio State since 2000. The Wolverines are home against Michigan State, but Harbaugh is 3-4 against the in-state rivals. Those are the challenges before Michigan might get another swing at a SEC heavyweight.

Accomplish those goals, then it will time to let it rip for real.

“This is the start,” Harbaugh said on the ESPN telecast afterward.