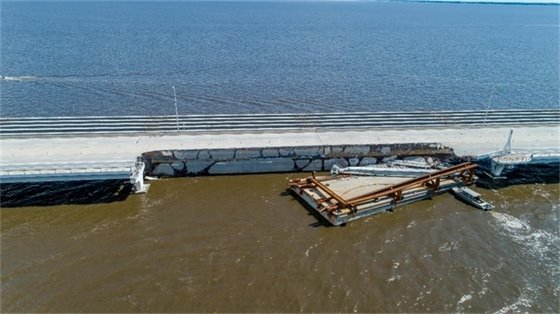 
A federal judge has found that Skanksa USA, part of one of the largest construction companies in the world, failed to secure its barges before a 2020 Florida hurricane hit. The ruling opens the door to hundreds of lawsuits from businesses and residents.

The largely self-insured Skanska, which is handling a number major infrastructure building projects in Florida and other states, had asked the judge to limit potential damages to about $1.2 million, per maritime law.

But dozens of business owners said they suffered serious financial hardship after one of the barges struck the Pensacola Bay bridge, closing it for almost a year and diverting street traffic away from shops, restaurants and other enterprises. Skanska was rebuilding the bridge at the time of the September 2020 hurricane, but four lanes were completed and open to traffic.

Some 27 construction barges broke loose from their moorings during the storm, causing a gaping hole in part of the newly built span of the bridge and damaging waterfront property around the bay.

The judge decided that although maritime law limits damages if the vessel owner demonstrated reasonable care, Skanska crews did not do enough and did not follow the company’s own hurricane plan. He noted that project managers had ample warning of the impending storm, and while crews took some measures to prepare, they did not move the barges to safer waters, the judge said.

“Where, as here, the vessel is a ‘large cumbersome, unmanned, unwieldy craft which, once loosed before these forces, would smash all in her path,’ the owner has a particular duty of care to avoid or minimize the increased harm the vessel could cause if set loose in the water,” Collier wrote, citing a 1960 federal appeals court decision. “Liability, if it exists, must turn on whether the barge causing the damage ought ever to have been in that predicament.”

Skanska officials said they plan to appeal the ruling. The company released a statement that the multinational firm is “extremely disappointed” by the ruling, arguing that it is not supported by evidence, and that crews took all needed measures, approved by government officials, to prepare for Sally, according to local news reports.

In trial arguments, Skanska attorneys argued that Hurricane Sally turned to the east during the night, catching managers by surprise and leaving them with little time to move or secure the barges.

The judge discounted that assertion. “It is difficult to accept Skanska’s expression of surprise over the turn of events when at the time the Pensacola Bay area was under a tropical storm warning and a hurricane watch,” Collier wrote.

One designated safe area for the barges was also hit by the waves and would have provided little protection, the company argued in trial. The judge wondered why the cove was designated as a safe parking area if it was considered to be ineffective, although he said it would have helped significantly to prevent some barges from escaping.

“Ultimately, it is of little difference to the court whether Skanska’s decision was the result of corporate inaction or the product of deliberate decision-making. If a company is forced into an imprudent decision because its own delay removed the other option(s) from the table, that is grounds for negligence, but so is it if that company makes a timely, considered decision that is nevertheless imprudent,” the judge wrote.

The company tried to get by with doing less, “and that gambit backfired,” he noted.

Collier dissolved a previous order that had stayed all lawsuits that had been filed in state court, now allowing those hundreds of claims to proceed.

Photo: A section of the Pensacola Bay bridge that was damaged by the barge. The damage forced the bridge to close for months, disrupting life and business in Penscola and Gulf Breeze, Florida. Courtesy, City of Pensacola.