Following Tuesday’s declines during the Wall St. session, which included a selloff of both tech stocks and small caps, on Wednesday, futures contracts on the , , and all moved higher while European stocks extended their rally. Earlier Wednesday, Asian shares retreated, mirroring yesterday’s New York trading.

All four major US benchmark contracts were in positive territory on Wednesday morning with both the tech-heavy, NASDAQ 100 futures and small cap value Russell 2000 futures outperforming for the second day in a row.

As we noted previously, this is an unusual paring considering the two indices represent opposing types of equities. Technology stocks benefit from a stay-at-home environment, while small caps thrive in an open economy. The tandem pairing could be a sign investors are trying to figure out, as another rocky pandemic year comes to a close, where things may be headed next as the word endures another coronavirus wave thanks to the Omicron variant.

Also noteworthy, the divergent valuations of the two indices. While the is up 26.85% for the year with just two more trading day sin 2021, outperforming its peers, the gained ‘just’ 13.75%, lagging the other major US benchmarks. In other words, there is no specific rhyme or reason for the joint performance during thin trading over the holiday week. Perhaps too it’s simply investors readjusting portfolios before the end of 2021 based on personal needs.

Banks and retail companies led the higher, extending the benchmark’s gains to the third day in a row. The tech stock selloff that started in the US yesterday and continued in Asia earlier today has acted as a drag on the pan-European index, signaling a clear cyclical rotation on the continent.

Australia’s was the region’s bright spot, rising for the fifth straight session, gaining 1.21% to close at a 3-1/2 month high even as the land down under’s most populous state, New South Wales, reported 11,201 new COVID cases.

On Tuesday, US shares slumped, ending a four-day winning run for the longest streak in close to two months. The dipped 0.1% from its 69th record close for the year.

The 30-component, mega cap , was the only index that actually gained, up 0.26%. Its value shares were led by aerospace and defense giant Boeing (NYSE:) whose stock climbed almost 1.5% after Indonesia lifted its ban on the company’s MAX 737 jet.

Boeing’s stock stopped dead beneath a resistance going back to March.

Shares of Disney (NYSE:) also jumped, gaining 1.57% after the company announced yesterday it will be reopening its water park in Florida, two years after the pandemic closure. Technically, however, DIS likely still faces an uphill battle. 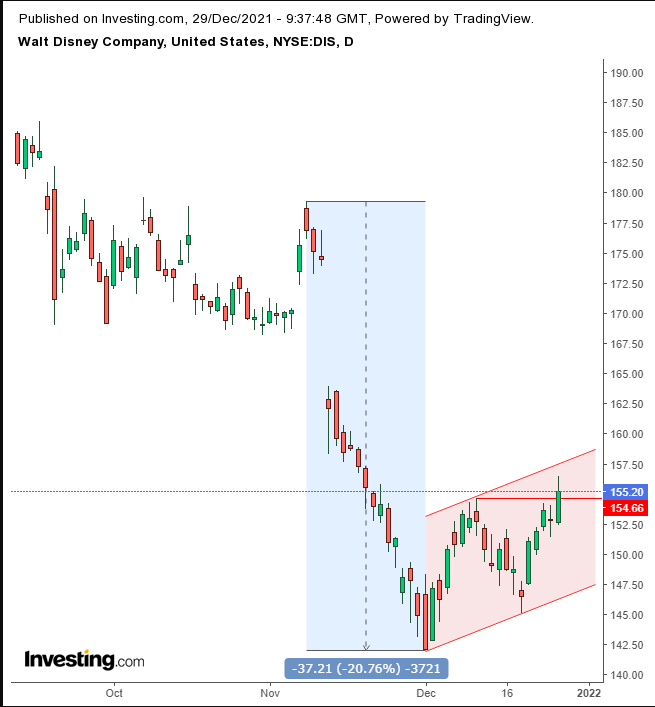 The stock closed at the Dec. 10 highs, increasing the odds for resistance. After the price plunged 20% in just three weeks, the current, tempered gains could prove to be a rising, bearish flag, completed with a downside breakout.

Both Boeing’s and Disney’s rallies are based on the faith of a continued open economy and therefore fit squarely in the cyclical rotation seen today in European trading.

US yields—including for the benchmark note—rose slightly, allowing the to extend an advance to its second day. 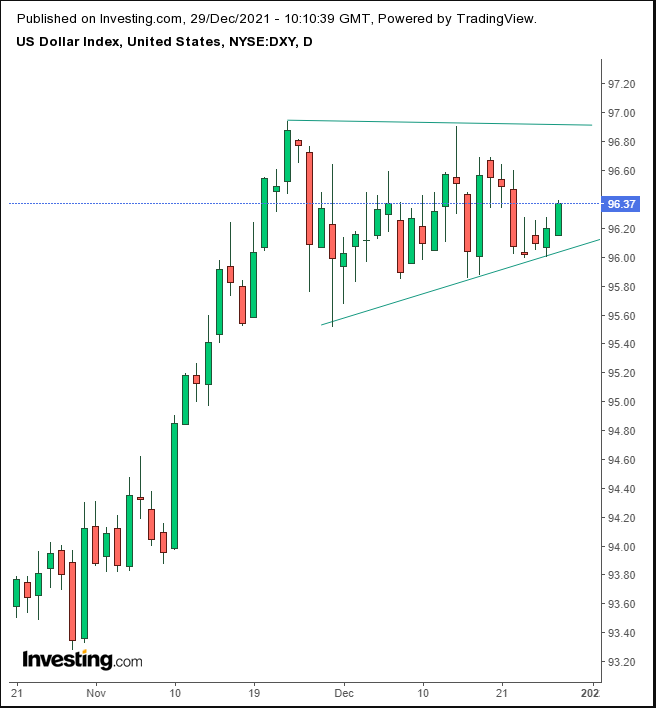 The dollar off the bottom of an ascending triangle.

retreated from five-week highs, on the 200 DMA.

was flat after giving up an initial advance. It’s currently mired by the 200 DMA. 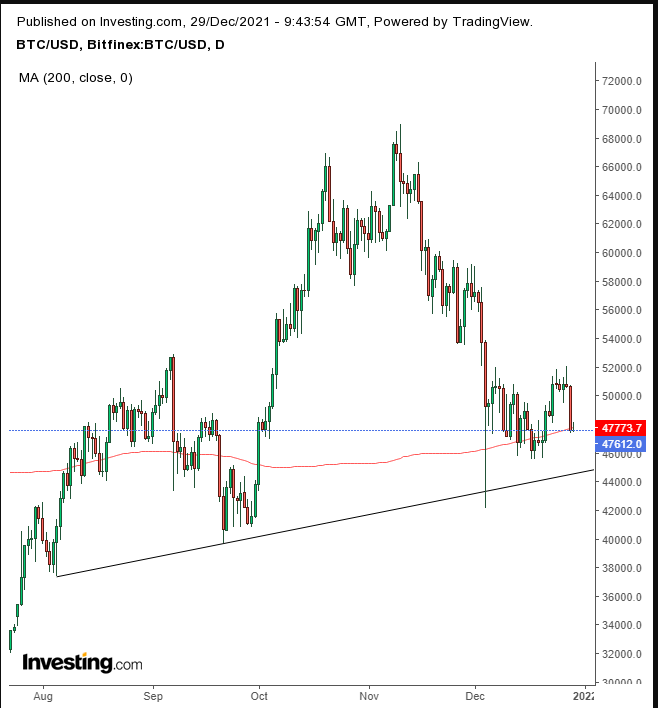 The cryptocurrency could be setting up an H&S top, which would then be part of an even more significant downside move.

hovered near one-month highs as investors extended the sense of optimism seen via value trading yesterday in Boeing and Disney and today’s European activity. However, oil’s trajectory isn’t in the clear yet. 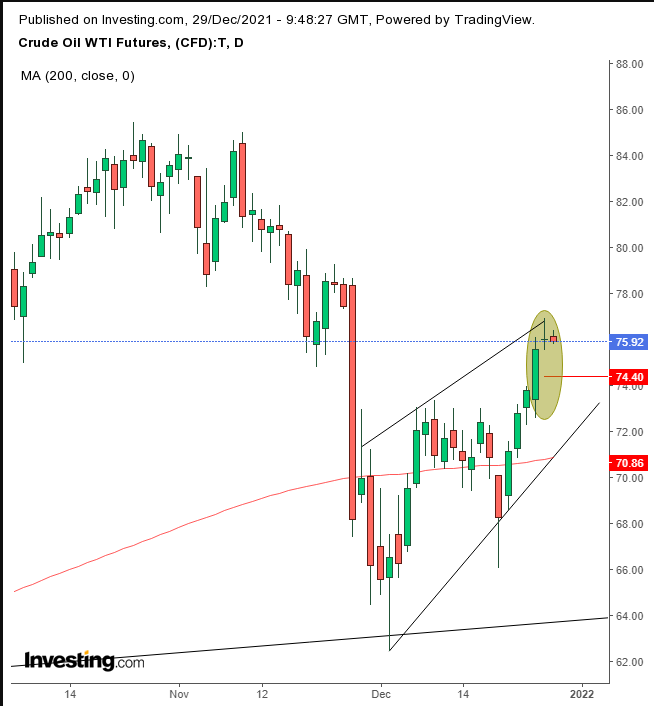 If WTI closes below 74.40 today, it will have completed an Evening Star, which could finish a rising, bearish flag, which in turn could be making up the right shoulder of an H&S top.