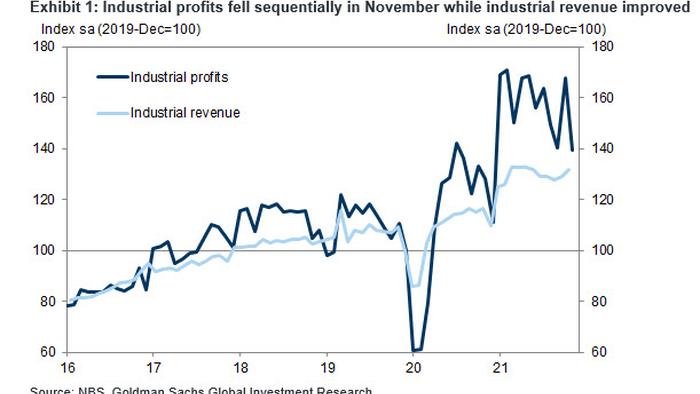 
Profit growth at China’s industrial firms tumbled in November, pressured by plunging prices of some raw materials, a faltering property market and weaker consumer demand, the national bureau of statistics said on Monday. Overall, profits rose just 9.0% on-year in November to 805.96 billion yuan ($126.54 billion), a drop of more than half from the 24.6% gain reported in October.

For the January-November period, profits at industrial firms rose 38.0% year-on-year to 7.98 trillion yuan, slower than the 42.2% rise in the first 10 months of 2021, the statistics bureau said. The data covers large firms with annual revenue of over 20 million yuan from their main operations.

Here is a summary of the key data:

In sequential terms, profits contracted 16.8% mom in November after seasonal adjustment, after a sharp rebound of +19.7% in October.

Some more details courtesy of Goldman:

Zhu Hong, senior statistician at NBS, said while state efforts to cool soaring wholesale prices in November took cost pressures off downstream industries, the curbs meant the contribution from the mining and raw material sectors to overall profit growth weakened. This means that the traditionally close relationship between China’s wholesale prices (PPI) and Industrial Profits is reestablishing itself, only this time it will lead to downside pain as PPI tumbles thanks to the recent plunge in coal prices following aggressive state intervention which confirmed that China’s “green” talk is nothing but one giant joke.

“But companies still face great cost pressures, and the improvement in profits for downstream sector needs to be further consolidated,” Zhu said in a statement accompanying the data release.

As a reminder, China’s red-hot PPI cooled slightly in November, driven by a government crackdown on runaway commodity prices and an easing power crunch as Beijing scrambled to lessen the crippling economic effects of surging costs. The flipside – it is also impacting industrial profits.

China’s economy, which lost steam after a solid recovery from the pandemic last year, faces multiple challenges as a property downturn deepens, supply bottlenecks persist and strict COVID-19 curbs hit consumer spending. The country’s property distress has also hurt the steel sector while production of cement, glass, and household appliances remains vulnerable to falling demand. It has led to speculation Beijing will cut its 2022 GDP forecast to as low as 5% (while the real number will be even lower).

As we reported previously, at a key agenda-setting meeting this month, China’s top leaders pledged to stabilize the economy and keep growth within a reasonable range in 2022, and to provide stimulus when needed, a major reversal from the country’s recent policy stance.