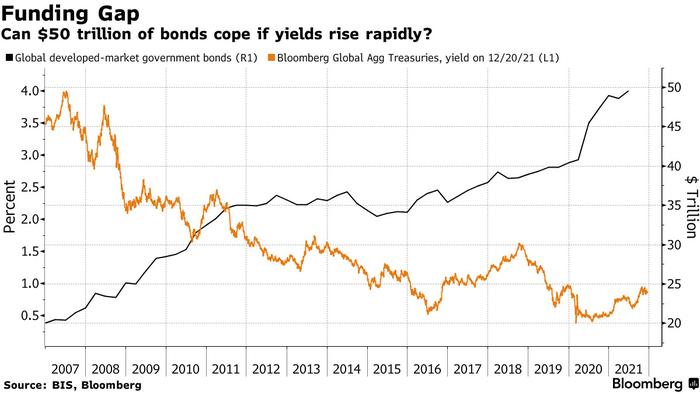 The size of the global government bond market surged by $10 trillion in the space of two years to reach about $50 trillion. Those outstanding borrowings are at least one gorilla in the room as investors gear up for a year in which yields are expected to climb as central banks step back and economies extend their recovery.

The massive bond mountain is not getting much attention, despite the explosive pace at which it grew in size and given the potential it holds to cause extreme havoc. That could be because it is simply too large to seriously contemplate, but the rapid growth in debt is one of the many Covid-era phenomena spicing up the market outlook for the coming year

At the very least the weight of all that debt acts to enhance the role that “price-insensitive” investors play in repressing yields.

The savings glut is a big part of that pool. Across Asia and beyond there’s a generation or two who grew wealthy from the postwar booms and are now more concerned about preserving capital than about adding to it.

Their presence helps to explain the waves of buying that contributed to capping yields at about 1.7% for 10-year Treasuries this year, as does demand from pension funds and insurers — remember the U.S. defined-benefit funds who switched into bonds.

Then there are the essentially forced investments from banks that have to hold sovereign securities to meet rules introduced after the collapse of Lehman Brothers.

And we have the trillions of dollars that central banks hold, both via QE programs and in their foreign-exchange reserves.

While all those long-term investors might offer reassurance that yields will stay low, they also underscore the dangers if yields start spiking — by sapping liquidity and amplifying the potential for extreme volatility that I flagged before.

The effective free float in global bonds has shrunk — central banks alone may hold about half the major markets already. Add in other investors and there are a lot fewer bonds available to trade. Deutsche Bank recently estimated the free float for Germany’s government bonds at under 10%.

There’s also the risk of what happens if all these large piles of debt rapidly lose value. While central banks may be able to ride out such moves when it comes to their QE stakes, the same may not be true for currency reserves. And what about the banks stuck with large holdings of what are supposed to be high quality liquid assets if those assets prove illiquid and deliver stinging losses?

The surge in bonds outstanding has been accompanied by an increase in duration, so that adds to the potential damage higher yields can cause.

That argues that central banks will face a very low bar to step back in to calm down yields any time they start shooting up.