Will Jerome Powell and the Fed double down and “get it done” by March?

If it means a stimulus taper at twice the previously-announced pace and a rate hike that could come a quarter earlier than thought, then there’s no telling how gold prices will react to that.

Bullion’s eerie calm-before-the storm might be unsettling to shorts in the trade who might have expected the market to start crumbling ahead of the of the Federal Reserve beginning Tuesday and culminating with Powell’s on Wednesday.

Aside from the Fed, the , the , and the will also hand down policy decisions later this week. The ECB could halve the number of assets it buys each month from April, said a Reuters poll.

At the Fed, expectations are heavy that Powell will side with colleagues who want to hurry along the taper of the central bank’s “forever-running” stimulus, by cutting as much as $30 billion a month instead of the previously-stated $15 billion. That way, the whole thing can be wrapped up in a little over 3 months, and the first pandemic-era rate hike can be held by April.

But some gold longs argue that over the past fortnight, talk of a faster-than-expected rate hike—most likely occurring between the end of March and mid-April — had been flogged to death in markets, so much so that the bullion trade had become desensitized to it. That probably explains the anemic action in the yellow metal’s prices in recent sessions.

Sunil Kumar Dixit, a regular contributor of commodity technicals to Investing.com, says gold needs to stay above $1,768 in the coming week to avoid plunging into the lower $1,700s or even below.

But gold could also surprise and move higher, Dixit said.

Gold And The Big “I”

Gold is also up for another reason: inflation.

News of rate hikes is almost always bad for gold. This time though, traders in bullion appear focused on the US inflation story, allowing gold to play its traditional role as a hedge against that, although strong Fed action to right the situation could still be negative for the yellow metal.

The US (CPI) rose 6.8% in the year to November, growing at its fastest pace in four decades just as it did in October, the Labor Department announced on Friday.

“Gold is slowly getting its mojo back after a hot inflation report mostly matched estimates,” Ed Moya of online trading platform OANDA said on Friday.

“A lot of the inflation is stickier than anyone wants and that should keep gold’s medium- and- long-term outlooks bullish.”

But Moya also cautioned that an accelerated rate hiking cycle is a big risk and could trigger panic selling in gold, though there does seem to be a high chance of the Fed doing that now.

“Gold just needs to survive a firm consensus on how many rate hikes the Fed will start off with next year,” he said.

Gold’s pendulum will, of course, be decided by the swings in US Treasuries and the dollar.

In Monday’s Asian trade, the benchmark ticked up slightly to 1.49% from last week’s 1.34% low, in what some investors saw as a steady but drawn-out rise on speculation of a rate hike.

The was also steady, inching up 0.1% to 96.18 after surprisingly flattening last week on the back of the CPI data.

Investors rushed into safe-haven currencies a couple of weeks ago, although reports that the Omicron variant of COVID may not be as bad as feared caused these flows to reverse by last week.

“All I want for Christmas is clarity,” analysts at Barclays headlined a research note.

Greg Anderson, global head of foreign exchange strategy at BMO Capital Markets, said it was normal for forex players to scale back positions toward the year-end and Friday’s retreat in the dollar was “probably a prelude to that.”

“The FX market has been extremely long US dollars for several months, so with this number coming in benign we’re almost out of events that could push the dollar materially higher before year-end,” Anderson added.

The argument for a US rate hike could not be more compelling than now. Aside from inflation running at its hottest since 1982, according to Friday’s CPI reading, the labor market also had the lowest number of in 52 years last week. among Americans, meanwhile, stood at just 0.2% above the Fed’s target for maximum employment as of November.

Also, Powell’s transformation from dove to hawk was almost complete when he told the senate at the end of last month that it was time to stop calling the runaway US inflation “transitory.” He also warned that “the threat of persistently higher inflation has grown” due to the emergence of Omicron, and that surging price pressures could last “well into next year.”

Even so, the Fed chair conceded that Covid poses further “downside risks to employment and economic activity.”

With such a complicated outlook, will the Fed push for doubling of its taper?

Powell will tell us on Wednesday.

On the oil front, crude prices took off strongly in Monday’s Asian session, recovering more of what they lost in the six weeks prior to last on growing optimism that Omicron’s impact will be limited on global economic growth and fuel demand. 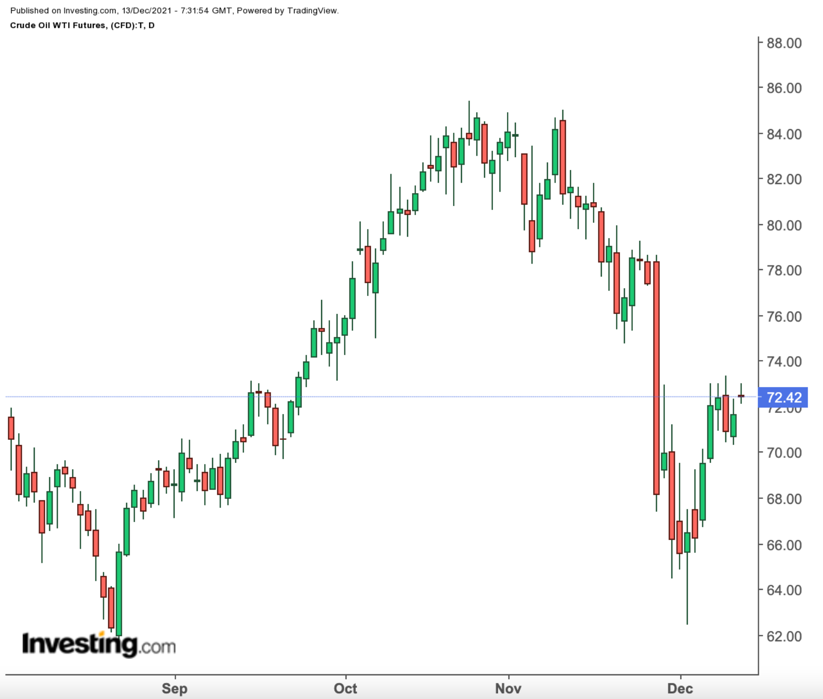 Dixit, the technical analyst, noted that after six weeks of free-fall, WTI had taken support at $62.40, a level that has acted as a hard floor since March 2021 on multiple price swings.

“Volume-driven buying above this zone can further extend recovery to $76.60 and $80,” he added.