Two weeks ago, I asked this pertinent  in my column on : Could it hit mid-$4 or below, before the cold really arrives in the United States?

What’s worse is, in the past four sessions alone, the market has tumbled $1.17, or 21%, from a Nov. 26 close of $5.45 as higher production and declining temperatures weighed on the price.

A supportive weekly , expected from the Energy Information Administration at 10:30 AM ET on Thursday, adds to the optimism of those who had turned long gas after four straight days of losses.

Yet, the vagaries of the gas market are such that nothing can be taken for granted.

“This $4.20 area is a major support for natty as this was exactly where it was before it took off for the big ride in September,” said John Kilduff, founding partner of the Again Capital energy hedge fund in New York.

“Technically, this should again be the lift-off point for the market but of course we could go even lower.”

“How much lower is the question?” said Kilduff.

“There is a support level at $4.20,” said Myers, who acknowledges that bearish factors—i.e. rising production and temperatures—had weakened gas burns for power generation and heating through early October. 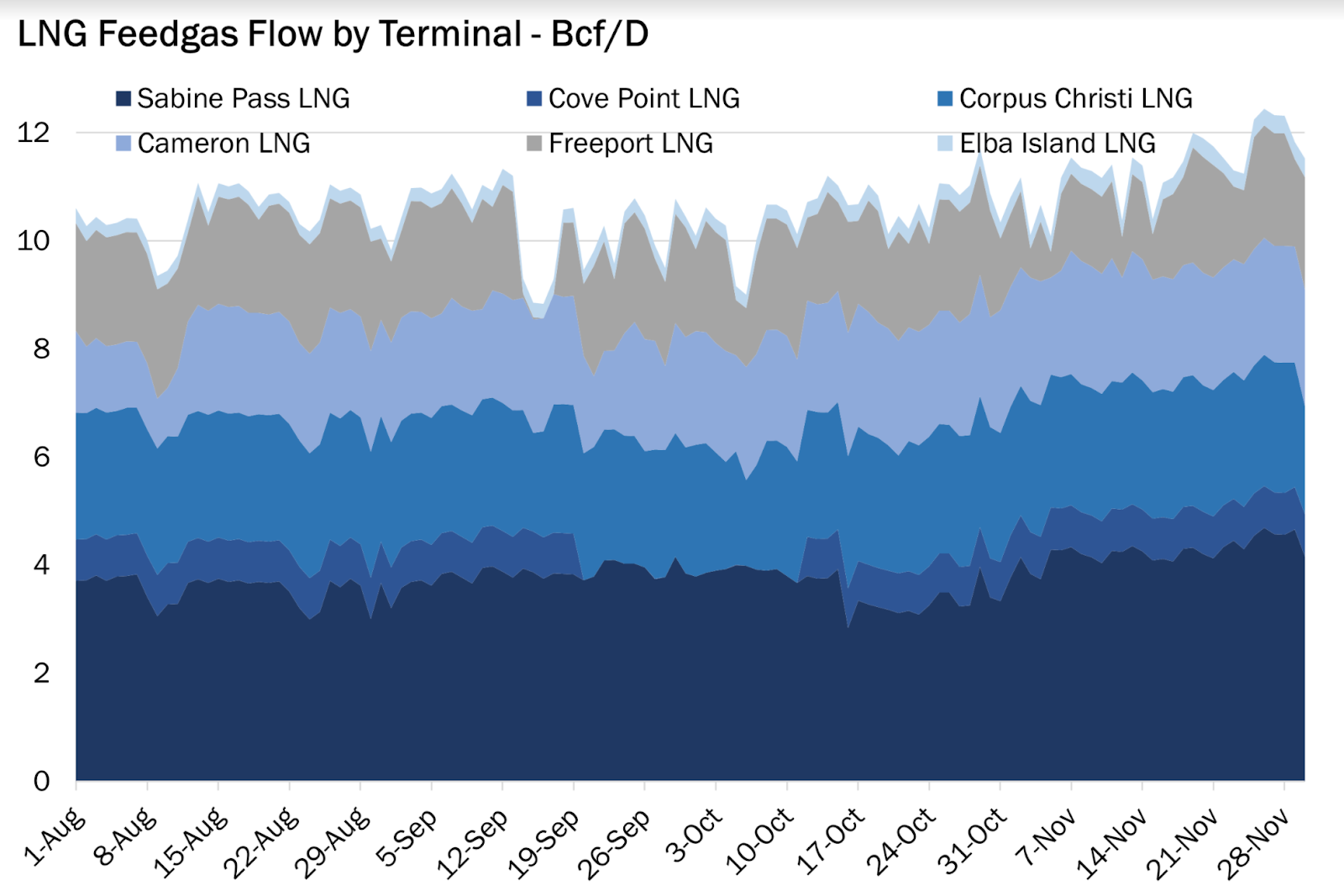 In the past week though, there has been a pickup in exports of liquefied natural gas (LNG), via Cheniere Energy’s Sabine Pass terminal, boosting overall gas consumption, Myers noted. He added:

“The Sabine Pass Train 6 has slowly been taking in moderate amounts of feedgas in the 0.5 billion cubic feet daily range. As a result, total LNG exports temporarily increased past 12 bcf daily.”

More supportive to market sentiment will be the storage report for the week ended Nov. 26. 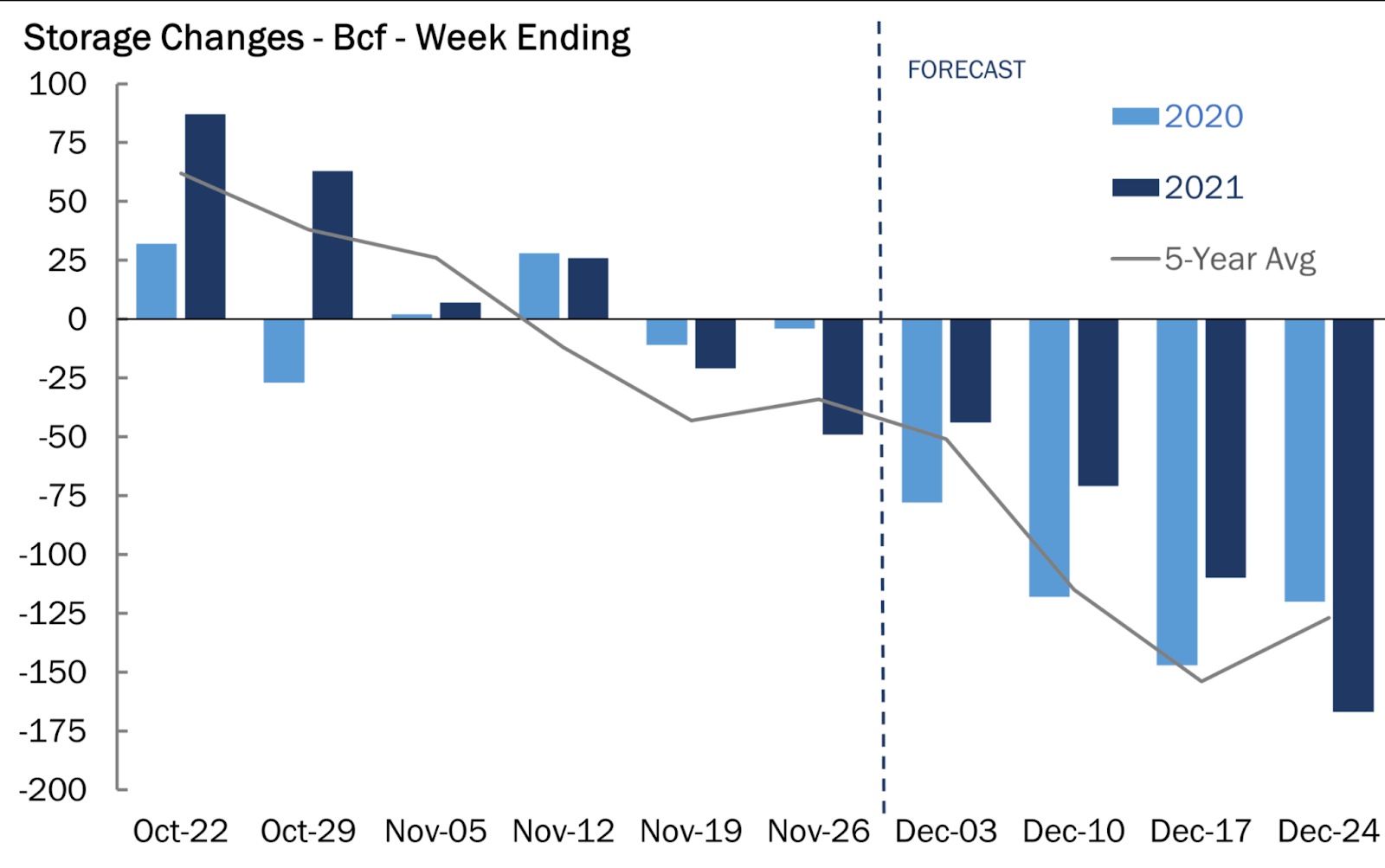 According to a consensus of analysts tracked by Investing.com US utilities likely pulled a larger-than-usual 57 bcf of gas from storage last week as colder-than-normal weather resulted in higher than usual heating demand.

Such a drawdown would compare with the pull of just 4 bcf seen during the same week a year ago and a five-year (2016-2020) average withdrawal of 31 bcf.

In the prior week to Nov. 19, utilities withdrew 21 bcf of gas from storage.

If analysts are on target, the withdrawal during the week ended Nov. 26 would cut inventories to 3.566 trillion cubic feet, 2.3% below the five-year average and 9.5% below the same week a year ago.

The weather last week was colder than normal with 142 heating degree days (HDDs) compared with a 30-year normal of 134 HDDs for the period, according to data provider Refinitiv.

HDDs, used to estimate demand to heat homes and businesses, measure the number of degrees a day’s average temperature is below 65 degrees Fahrenheit (18 degrees Celsius).

Looking ahead into the next month, initial estimates for withdrawals appear disappointing due to some early warmth in December, said Myers.

“Given that these weather forecasts do not deviate significantly in the near term, and that these withdrawals play out as expected, 2021 total storage could very well catch up to the total five-year inventory average by early-to-mid December.”

With last week being an exception, weather models of late haven’t been impressive enough for gas, explaining the prior week’s 22% price plunge and slump of 13% in the first week of November.

“In a market where weather trumps everything, models continue to struggle to show any meaningful cold through the middle of the month,” naturalgasintel.com said in a report.

At this time of the year, a stronger upper level trough from Alaska into western North America, and a positive North Atlantic Oscillation pattern on the Atlantic side have combined into “a warm weather rout,” the report said, citing readings from forecaster Bespoke Weather Services.

“Some days in the next couple of weeks could get even warmer given the strength of these signals,” said the report, again citing Bespoke.

Notwithstanding the overall balmy conditions, it said there were differences among the weather models, as the European data was much warmer than the American ensemble.

Meanwhile, the midday Global Forecast System trended colder with a weather system forecast to arrive in the Midwest from Dec. 6-8, the report said, quoting NatGasWeather, another forecaster.

The shift should increase demand closer to seasonal levels, NatGasWeather said, though it wondered if even that would be enough.

“Even after the latest GFS added demand Dec. 6-8, it’s still quite bearish overall for the coming 15-day, enough so to flip current deficits of 58 bcf to surpluses by mid-December.”

Where to buy LUNC coin