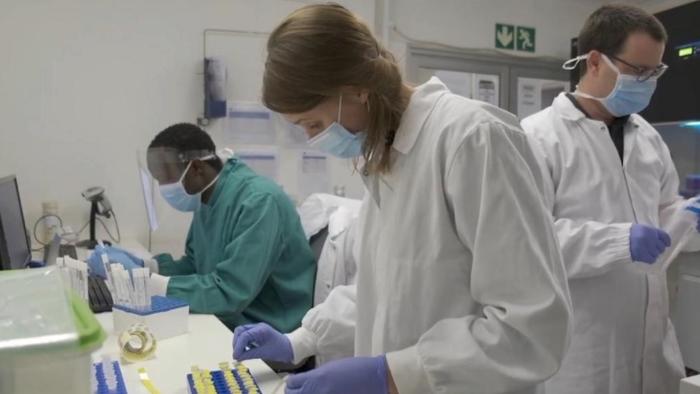 
Over the weekend, Goldman Sachs’ analysts slammed the latest round of variant hysteria and insisted that the omicron variant will likely be remembered as a laughable sideshow, not unlike “Delta-plus”. By Sunday night, the word had spread – don’t fall for the latest round of COVID variant FUD. It’s just one more tool for the Biden Administration and Dr. Anthony Fauci to push their own agenda while trying to frighten Americans into getting both the original jabs and their booster.

In its latest note, the Goldman team started by ticking off a bunch of new stats about omicron that millions of Americans can probably site by memory at this point. The variant is roughly ~50 mutations, with ~30 on the Spike protein and ~10 on the receptor binding domain.

A map of omicron’s mutations shows that the variant has several attributes believed to promote immune escape. However, this doesn’t necessarily guarantee that the variant will eventually replace delta as the most pervasive variant in the world.

After mapping out four market-moving scenarios, Goldman is taking three parallel approaches to addressing the omicron variant from the perspective of Moderna, maker of the second most-popular American COVID jab (after the Pfizer-BioNTech jab, of course).

Should the authorized 50μg booster dose of Spikevax prove insufficient to boost waning immunity against Omicron, with data on the first two expected in the coming weeks, the company is trying to 1) evaluating whether a higher dose booster of Spikevax (100 μg) can neutralize the variant, 2) studying two multi-valent booster candidates (mRNA-1273.211, which includes several mutations in Omicron also present in the Beta variant and mRNA-1273.213, which includes many mutations also present in the Beta and Delta variants) in the clinic.

As Goldman prepares to host Stephane Bancel at a summit for clients set for tomorrow, the analysts note that releasing an omicron specific booster isn’t the only way to conquer this new strain. After all, it has only infected less than 200 people so far.

Offering faint praise for Moderna, Goldman said the flexibility of the mRNA platform would support a swift transition to produce a new formulation of the vaccine if needed.

Moderna’s CEO Stephane Bancel reiterated during his latest round of interviews that his company is poised to produce another round of vaccines within months – that is, if the world still cares about omicron three months from now.

Bancel’s eagerness to speak to perceived faults in his company’s breakthrough vaccine is actually self-serving; one order from the US government for a bloc of millions of new omicron-focused vaccines might be Moderna’s best chance at meeting Wall Street’s lofty sales projections.

Since we can’t always trust Bancel’s warnings about the short-comings of his own vaccine (given the overwhelming need to talk his own book outweighing the public’s health), how can the public determine whether a new round of shots are necessary?

Well, it looks like Goldman has some answers about the “regulatory path forward”.

First, Moderna’s Spikevax is authorized as a booster for multiple populations at the 50μg dose level and MRNA is working to test the ability of the current vaccine dose to neutralize the Omicron variant with data from in vitro neutralization assay experiments expected in the coming weeks.

Goldman continues: Should an Omicron-specific vaccine be necessary, an outstanding question on the forward will be whether it should be administered as a booster or as a primary series, which MRNA expects will be discussed with regulators and which we expect to be informed by data that has yet to be generated and emerging epidemiology. On the approval process for an Omicon-specific vaccine, MRNA noted two potential scenarios at the discretion of regulators: 1) while there is no established correlate of protection (COP) based on neutralizing antibody levels, evidence of a COP is emerging based on studying breakthrough cases, which may support a regulatory path forward; 2) through an immunobridging study, whereby MRNA would need to demonstrate that the neutralizing antibody titer levels are at the same level (or higher) than levels observed in the Ph3 COVE study of Spikevax.

How will this impact MRNA’s manufacturing?

MRNA is producing vaccine at scale and anticipates it would take on the order from a few weeks to one-two months to switch over production to a novel formulation of the vaccine. Similar to Spikevax, production capacity will largely depend on whether an Omicron-specific vaccine would be administered as a booster or a primary series.

Interestingly, in an endemic market, MRNA anticipates demand for a lower number of doses per vial (~5 doses), noting glasswear is currently a limiting factor for supply. If Omicron necessitated that the population receive a new vaccine, the vaccine could be supplied in a 10-dose vial as it is now, in which case supply may be greater than current capacity.

What do we model for?

We model for FY22 vaccine revenue of $29.5bn per ~2bn doses (guidance of 2bn-3bn)and our COVID-19 vaccine revenue stream in 2023+ ($10.5bn per year) serves as a proxy for a COVID-19, flu or combination respiratory viral vaccine incorporating both.

Valuation: Our 12-month price target of $395 is based on a blended 50% DCF value of $411 and 50% value of $378 based on a 13x P/E multiple (mean multiple for large US pharma) applied to our FY22(75%)/FY23(25%) EPS forecasts. Our 13x target P/E multiple is in line with the mean consensus multiple assigned to large pharma, which we believe is appropriate given MRNA’s platform and growth profile. For our DCF value, we continue to employ a 10% WACC and 6% TGR.